Dehydrated: when the amount of water an organism has in its body is lower than normal...more

Evaporate: the act of a non-boiling liquid becoming a gas.

To an outsider, it may seem like kangaroos live an easy life. Without many predators besides humans to worry about, they get to hop around, grazing on grasses during the evenings and nights, and lay down in the shade during the heat of the day. But a lot more goes into surviving in the wilds of Australia and New Guinea. 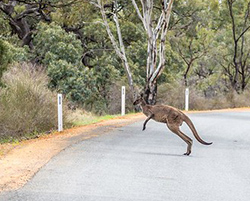 If someone hits and fatally hurts a kangaroo, they are asked to check to see if it’s a female with a joey in her pouch. If she does, they are supposed to take the joey to a wildlife center, if possible. Image by Russel Charters via Flickr.

First, predation by humans is a big deal. Hunting kangaroos is a large part of many different cultures in Australia. Over a million kangaroos are hunted by humans every year. They are caught for their meat and skins, and many are killed on top of that by injuries from gunfire, or by being hit by cars. But for those that live in areas where they don’t have to worry as much about hunters, there are still many other challenges.

As the number of humans in Australia increased, they killed carnivores that had hunted kangaroos in the past. Because of this, numbers of kangaroos have gone way up. High numbers can be problematic for the kangaroos because there might not be enough food to eat for all of them. As in most animal communities, kangaroos do best when in balance with other species that they have naturally evolved to live with, but human presence often alters this balance. Humans aren't the only worry for kangaroos, though.

Kangaroos live in a wide variety of habitats and some live near water most of the time. But some species, like the red kangaroo, can live in areas without much water. We call these “xeric” (pronounced zer-rick) environments. But the red kangaroo has adapted to these xeric places.

They drink less water than most kangaroos, and their urine is more concentrated so they will lose less water. They also look for food mainly at night or during dusk or dawn to avoid being out in the sun during the middle of the day. Instead, they spend their days trying to stay cool in the shade of trees and bushes.

Some kangaroos, like the common wallaroo, can also avoid or tolerate dehydration during times when finding water is tough. In one study, a population of wallaroos survived an eight-month drought, with only a few signs that they may have been dehydrated.

Trying to save water can be hard when you live in hot places. As humans, we are able to sweat to help us cool off using evaporation, but this uses up a lot of our body water. Kangaroos, much like dogs and many other furred mammals, don’t really sweat. But they do have a trick up their… sleeves… to help keep cool. 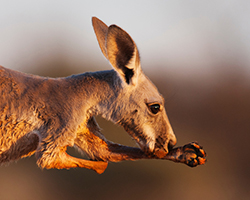 Kangaroos have very thin forearms, with short fur. If they lick their forearms, they can cool themselves off using evaporation. Click for more detail. (Image copyrighted by Jami Tarris, not eligible for reuse. )

Kangaroos have a cooling behavior. They will use their saliva to cool themselves off, licking their forearms to help lower their body temperature. In this more controlled way, they can still use evaporative cooling when they need to.

As grazers, food is usually readily available for kangaroos, but that doesn’t mean that life is easy. They, like all animals, still have to face the different challenges that come with living in any habitat. Even if they seem to hop through life without a worry.

Karla Moeller. "The Life of a Kangaroo". ASU - Ask A Biologist. 20 August, 2020. https://askabiologist.asu.edu/kangaroo-survival 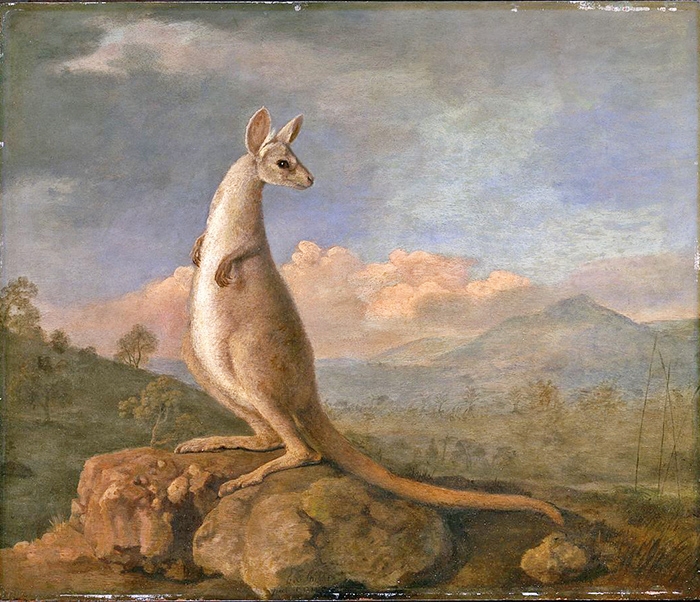