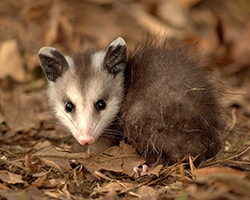 It’s early in the morning, and the sun has just started to peek over the hills, when you hear something in the yard outside. Your trash can has fallen over, and something is digging through your bags of trash. From the window, it doesn’t look like anything too big, so you decide to creep outside for a closer look. You peek over the edge of the can—now laying down—and see a large, almost rat-like creature searching for food. But it’s not a rat at all. You’ve found an opossum, the only marsupial that lives in North America. North America is likely where all marsupials, including kangaroos, evolved.

Marsupial evolution began over 90 million years ago, between the times when crocodiles and snakes came about. This was long before dinosaurs like the T. rex and Triceratops evolved. While the first marsupials likely started in North America, many of them died out. Some moved into South America, and many groups changed and adapted to new environments. Over 100 types of opossums and shrew opossums live in South America today. There is even one tiny opossum-like animal lovingly known as the “little monkey of the mountain.”

But back to our trek across four continents… About 55 million years ago, a group of marsupials crossed the land bridge between South America and Antarctica (which was much warmer then) and kept going. They made it all the way to the land that is now Australia, before the southern continents separated. Those marsupials evolved into many different groups and species. About 15 million years ago, kangaroos started to appear. Their ancestors were opossum-like creatures that lived in the trees. Many types of species died out over time, but today, around 250 species of marsupial live in Australia. Over 50 of these are kangaroos.

As land masses shifted over the last 100 million years, various land masses connected and split. Land bridges formed between the continents we now recognize, and many animals were able to travel between lands. Image by Mannion, P.D., in "The latitudinal biodiversity gradient through deep time," Trends in Ecology and Evolution.

The red kangaroo species you’d likely recognize today started to evolve from other kangaroos around three million years ago. But the story between 15 million and 3 million years ago is one full of twists and turns. Their ancestors moved out of the trees and onto the ground. They became more diverse as grasslands expanded. And they picked up a way of moving—hopping—that is very efficient. But the reasons for why this way of moving became so successful for them are still unclear. 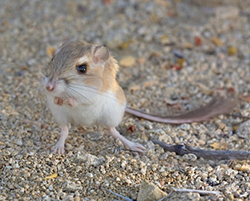 Among rodents, like this kangaroo rat, being good at hopping on two legs makes you more likely to avoid being someone's dinner. For kangaroos, hopping may have evolved because it is a very efficient way to move. Image by  Alan Harper via Flickr.

Scientists have three main ideas as to why hopping may have evolved in kangaroos and a few other groups of mammals. Two of these likely relate to smaller kangaroos and the ancestors of kangaroos.

First, hopping can help animals escape from predators. Rodents that can hop on two legs are caught by predators less often than rodents that don’t hop. Second, hopping allowed the arms to be freed a bit during moving, and over time, in some species they evolved to be better at handling food. And last but not least, it’s a very efficient way to move.

However hopping came about in kangaroos, it’s likely that it is still so successful because it is an efficient way to move. Especially for kangaroos living in deserts, where water and quality food can be harder to find, moving efficiently is important. While there are still a lot of questions about kangaroo evolution, we do know that they now live far away (leaps and bounds, you might say) from where their ancestors first evolved. 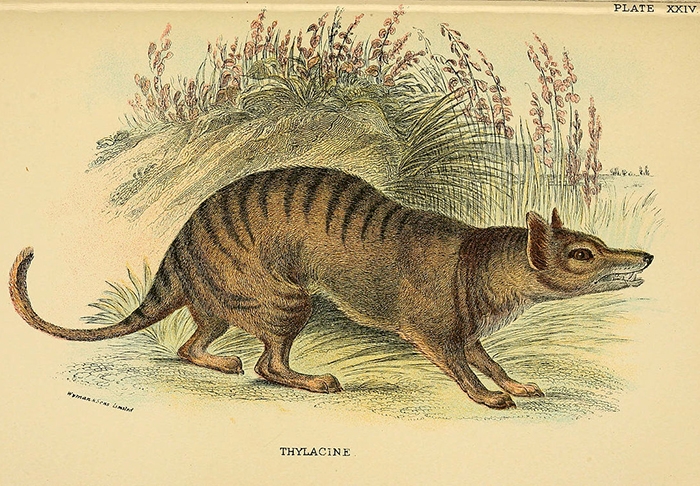 Many different types of marsupials have existed previously, but gone extinct. This drawing is of a Thylacine, a carnivorous marsupial that went extinct in the 1930s.