The Life and Death of a Fig Wasp 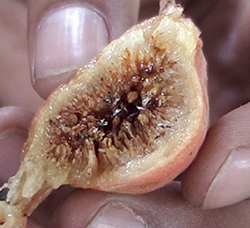 Look closely and you can see the tiny fig wasps inside this Ficus racemosa fig.

Would you be happy if your favorite fruit came with a prize inside, like some boxes of cereal?  Would you still be happy if that “prize” was a very tiny, dead wasp? While most of us don’t like insects in our sweet treats, the monkeys, bats, parrots, and other animals that eat a lot of figs don’t seem to mind. And that’s a good thing, because every fig in the rainforest ripens only after a wasp dies inside.

A fig wasp’s life begins and ends in… you guessed it, a fig. A young fig wasp female leaves the fig she was born in and searches for a fig in which to lay her eggs. She’s shorter than an eyelash, but she will fly as far as 6 miles to find a tree with flowering figs.

A wasp finds a flowering fig by using her sense of smell. When she enters through the small opening, her wings and antennae are torn off.

A flowering fig is not easy to spot by sight. Unlike the bright, colorful flowers you see in a garden, fig tree flowers are hidden inside hollow balls that will ripen into figs. This means the fig wasp must use her sense of smell to find a tree with flowering figs.

When she finds a fig with flowers, she squeezes through a tiny opening to get inside. The opening is so small that when climbing in, the wasp tears her wings and antennae. This means that she will never be able to leave. She lays her eggs and lives the rest of her short life inside that tiny fig.

Her eggs grow inside the fig flower and hatch several days later. The newly hatched wasps mate with other wasps that were born in the same fig. After mating, the males dig a hole in the fig that allows the females to fly out and find new figs. The males do not have wings, so they cannot leave, and die inside the fig in which they were born.

Why You Need Wasps to Make Fig Fruit

Figs and wasps depend on each other to reproduce, so you can't have one without the other.

Just as the fig wasp depends on the fig tree to complete its life cycle, the fig tree is counting on the wasp. Like most plants that reproduce using fruit, the fig tree’s fruit ripen only after its flowers are pollinated with a grain of pollen from another tree. But with the flowers hidden inside the figs, how does the pollen ever get to the flower?

Figs and Wasps: Together Forever

As you now know, fig trees require fig wasps to make new trees, and fig wasps require fig trees to make new wasps. This is an example of a special relationship that biologists call an “obligate mutualism.”  In an obligate mutualism, neither species can survive without the other. So it seems that if monkeys, bats, or parrots want wasp-free figs, they are simply out of luck. 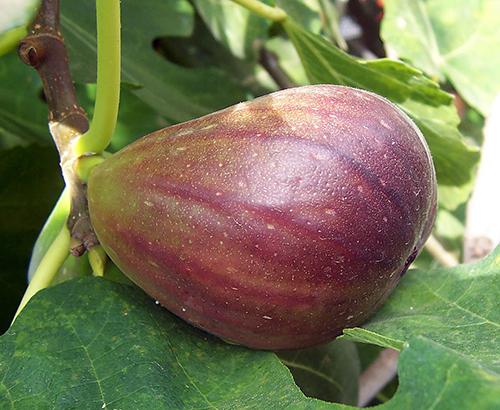 Figs can be found on all continents except Antarctica.