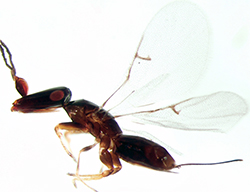 Fig trees depend on female fig wasps like this one to pollinate them.

Fig trees depend on the fig wasp females to deliver the pollen the trees need to reproduce. But how can the trees make sure the wasp carries enough pollen to the next fig? Different fig species use different strategies to solve this problem.

The easy solution is to pack the fig full of large, pollen-producing flowers. In these figs, the wasps have no choice but to brush against the flowers, which cover the wasps with pollen as they pass. It’s messy, but it works. 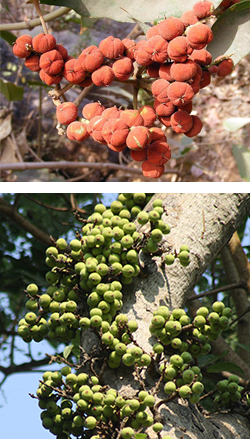 The wasp brings pollen to the fig so the tree won’t drop it.

In other fig species, the female wasps carefully gather pollen into special structures on their bodies before they take off. This system benefits the fig tree because it can make less pollen if the female wasp is purposefully collecting it.

But why does the tiny female fig wasp take time out of her short life to help the fig? Animals don’t do favors for other species just to be nice.

Scientists don’t know for sure, but two ideas are supported by evidence from experiments. The first idea is that fig trees will drop figs that are not pollinated. The wasp doesn’t want the cozy nursery she has selected to fall to the forest floor before her babies hatch, so she brings pollen to that fig so the tree won’t drop it.

The second idea is that a fig tree puts more sugar and other nutrients in pollinated figs than in unpollinated figs. If this is the case, the female wasp brings pollen to the fig so that the fig tree will provide more food for her babies that are growing inside.

Additional images via Wikimedia Commons. Image of wasps on fig via JMK. 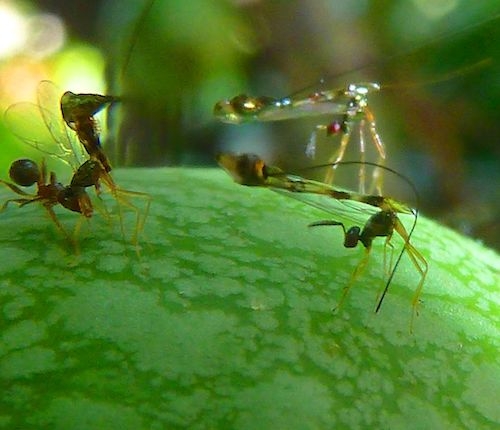 Tiny fig wasps will fly up to 6 miles to find a ripe fig in which to lay their eggs.