Ecosystem Management: the use of knowledge about the environment to solve problems that arise between humans and nature.

Marine: living in the ocean.

You hear ruffles in the long, green blades of grass. A small weasel-like animal with feathers in its mouth appears. You recognize its small body and long tail…it is a mongoose. Behind you, on the beach, you spot another one, kicking brown sand up into the air as it digs for turtle eggs. 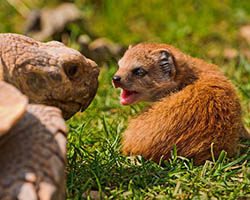 This may seem like a cute interaction, but the mongoose is a problem for many species on Hawaii. Click for more information.

The mongoose is creating many problems on the islands of Hawaii. Like the people who visit Hawaii for vacation, the mongoose travelled there. This species of mongoose is from Asia and it is not a welcomed visitor. It eats native birds and turtles on the island.

The residents and scientists of Hawaii are worried that the mongoose might even endanger some of these species. So how did the mongoose end up in Hawaii?

In the 1800s, Hawaii had a large sugar cane industry with many sugar cane plantations. The plantation owners were upset because the rats were eating and ruining the sugar cane stalks. As a result, the farmers decided to bring the mongoose to Hawaii to eat the rats and protect their crops. The farmers soon realized that the mongooses were not eating the rats.

You see, the mongoose is diurnal (active during the day) while the rats are nocturnal. In the end, the mongooses ate some rats, but other rats continued to eat the sugar cane. Now the mongooses eat the native birds and turtles. 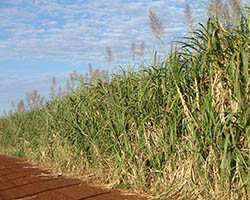 Mongoose were introduced to Hawaii to try to protect the sugar cane crops from rats. Click to enlarge.

The example of the mongooses in Hawaii shows the importance of understanding the world around us. Ecosystem management uses knowledge of the environment to solve problems in a way that is good for people and nature.

It's hard to try to fix these problems without studying the ecosystems in which they occur. Scientific information allows for people like the sugar cane plantation owners to make better, informed decisions. For example, how could things have been different if the plantation owners had asked biologists to solve the rat problem?

The biologists likely would have watched the rats and noticed that they are nocturnal, have nests, and have a good sense of smell. They would have researched the rats’ habitat, eating habits, water source, and predators. 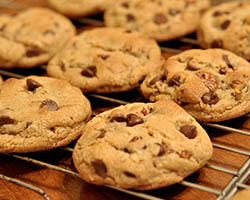 Just like recipes vary for different cookies, the way to manage ecosystems vary depending on the habitat. Image by Kimberly Vardeman.

Such information would have helped them understand that mongooses weren't a good solution, but that rat traps may have been. They may have even been able to predict the negative effects that introducing the mongoose has had on other parts of the ecosystem. What would happen in a different ecosystem?

Ecosystems are similar. Each ecosystem has similarities to others but they need different rules for their unique challenges. 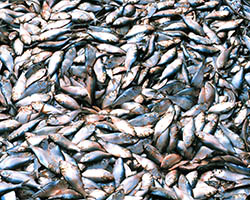 Whether caught for pet trade, food, or fertilizer, over fishing is a huge problem in marine ecosystems. Click to enlarge.

In marine ecosystems, biologists study different zones in the water and the organisms that live there. Sometimes, they learn information that can help people be more responsible when they use the environment. For example, people can fish too much or with harmful methods and can cause problems for entire ecosystems.

In coastal East Africa, fish populations of the humphead wrasse are declining as they are collected for the pet trade. These large fish live in reefs, so when people catch them, they often harm the reefs themselves. They are also taking too many of the wrasses out of the population.

Biologists may tell the fishers that they cannot fish in certain areas because the fish population there is too small. The fishers should follow the recommendations, because their jobs depend on the fish. 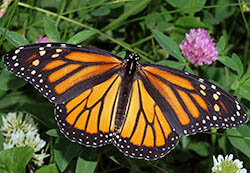 Herbicides are harming monarch butterflies because they are killing the milkweed plants monarch caterpillars depend on. Image by Kenneth Dwain Harrelson.

If we move to farmland, a terrestrial ecosystem, there are often problems with chemicals and topsoil loss. Farmers use chemicals to keep weeds and pests out of their fields. Unfortunately, they also keep wanted plants and insects away.

Why bother? Butterflies are important pollinators that help humans grow crops, so we want to make sure we don't hurt butterfly populations.

Nature is beneficial for humans, and often in ways you may not even realize. Ecosystem services are the benefits that we get from nature. Pollination is an example of a service provided by the ecosystem that benefits humans. 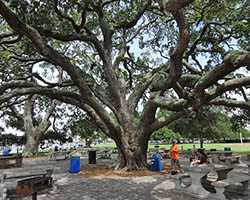 Ecosystem services are the benefits people get from nature. Click for more information.

You and everyone around you are part of an ecosystem. We live in ecosystems, use resources from them, and rely on their services. If we are not careful to protect the ecosystems we are in, then we can create new problems. 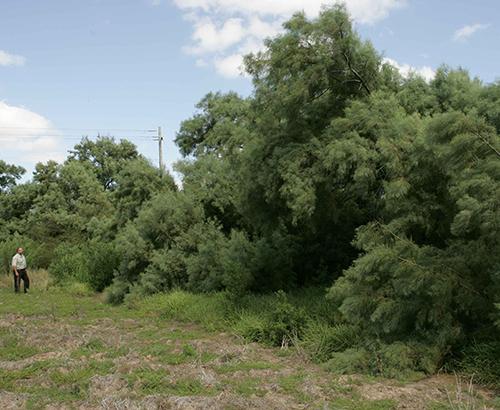 Salt cedar, or Tamarisk, is considered a harmful species by many people in the United States, where it was introduced in the 19th century.