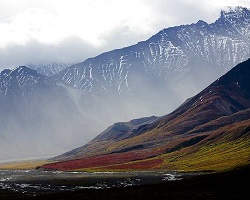 Though tundra may look barren, like this spot in Alaska, the tundra is a very diverse biome. Click on the image for more detail.

You shiver and shake. The air is crisp and chilly. Closing your coat tighter, you watch your warm breath make moist puffs in front of your face. We’ve all experienced being cold. But our ideas of cold are very different.

Where you live, the winter may be a season that comes and goes. But in the tundra, summer is the only season when air temperatures creep above freezing. Freezing is the temperature at which water turns into solid ice (usually 32 degrees Fahrenheit (°F) or 0 degrees Celcius (°C)). In the tundra, the water and the ground remain frozen year-round.

Imagine living in a place always cold, frozen over, and covered in a layer of frost. Luckily, you can probably escape the cold weather in your heated house with some hot cocoa. But living outside in a biome like that is something entirely different. As you’ll see later, the bitter tundra creates many challenges for animals and plants because not only is it frigid, it’s dry, too.

Despite the extreme conditions, life found in the tundra is very diverse, which makes the creatures here even more impressive. 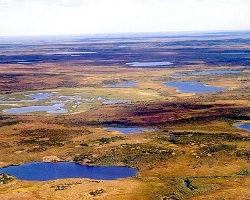 This treeless plain, or tundra, experiences cold temperatures and high winds. In most places, the top layer of soil is permanently frozen, which is why we call it permafrost. Image by Dr. Andreas Hugentobler.

Tundra means “treeless plain.” It’s the youngest biome on earth, dating back 10,000 years. Yep, that’s considered young in terms of the age of the Earth. Through all that time, life in the tundra has adapted unique features to cope with the harsh wind and cold.

Summer temperatures in the tundra range from 37 to 54°F. These are temperatures most people would consider to be winter and spring weather. Summer gives plants and animals, like sandhill crane and caribou, roughly 50 to 180 days to grow and breed. In the winter, it dips down to an average of -29.2°F, and winds can reach 30 to 60 mph. That’s almost as fast as a car on the highway. No wonder life in the tundra is tough.

Looking out over a vast plain toward a distant blue mountain, you can see past the brushy vegetation that’s lying low to the ground. The sun is setting, throwing golden colors across the sky. With a soft crunch, you step forward and break the penetrating silence and stillness around you. Getting only 6 to 10 inches of precipitation per year, this place is like a cold desert. With so little precipitation, you’re not walking on snow. Instead, most of the tundra's ground is made up of a barren, frozen soil called permafrost.

Getting in on the Action

Across the landscape of mosses and grasses, the animals are nowhere to be found. Wait! Yelp. Flap. Out of a patch of shrubs, a raven takes to flight as an arctic fox emerges from the grass, looking upset about his lost meal.

Arctic hares show us the advantage of camouflage. Click for more detail.

The more you explore of the tundra, the more life you notice. It’s sometimes hard to see, but there are lots of plants and animals that live here. Small mammals, like snowshoe hares, are tucked away in quiet hillside burrows while a ptarmigan, a large bird, gnaws on berries and twigs. Across the horizon, spots of color from the sunset – pink and orange hues – make the chill a little more bearable. But where exactly are you?

Where in the World Is the Tundra?

Shown here in green, the tundra is mostly in the northern hemisphere. Click to enlarge image.

Tundra covers 20% of the earth, most of which is in the northern hemisphere from Greenland and coastal zones of the Arctic to parts of Alaska, northern Canada, and northern Russia. These areas are the coldest and driest in the world.

In order to know what these places all have in common, we have to understand the earth’s orientation to the Sun. The tundra’s location at the poles is important because in these locations far from the equator, the sunlight is less intense and causes the temperatures to plummet.

Here we see why land closer to the poles get less warmth from the sun and why summer is warmer in those areas. Click for more detail.

Less sun means less heat and shorter summer seasons. In fact, during the winter, the sun hardly reaches these northern locations, and weeks go by without any sunlight at all.

Days get shorter and shorter as winter wears on until our planet revolves further along its circular path around the sun. Summer in the tundra begins when the Earth is angled so the Sun’s rays reach closer to the poles. 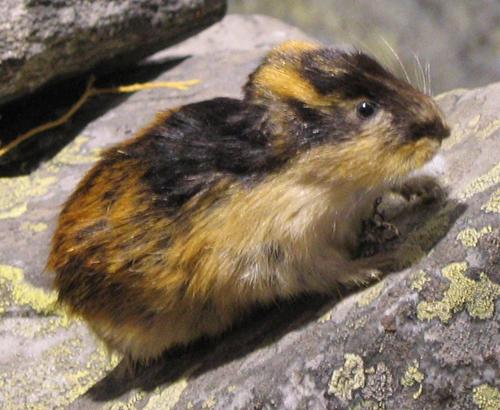 The tundra may seem empty, but it is filled with all kinds of colorful creatures like this lemming.