Autotroph: producers that get nutrients by harnessing energy directly......more

Plants of the Tundra 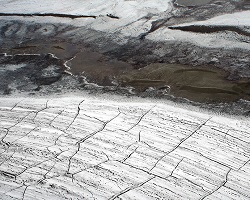 Permafrost is a layer of frozen soil, often made of rotting plants mixed with gravel and other ground materials. Permafrost is found throughout much of the tundra. Image by Brocken Inaglory.

For vegetation, many aspects of the tundra make growing big in size a challenge. Recall the tough, frosty ground you were trekking across? It’s called permafrost, like permanent frost.

The ground is called permafrost if it has been frozen for longer than two years. In many areas, there can be a buildup of organic matter over time in areas where the ground freezes. When this happens, the ground is compacted and frozen but never broken down.

If we look deep in the ground, we find that some of the layers of permafrost never thaw. The permanent ice in the ground can go as deep as almost 5,000 feet.

The top of the mixture of soil, gravel, and finer materials are frozen for the majority of the year since the temperatures don't increase high enough for it to thaw. But during the warm summer, the ground can thaw in some areas down to 13 feet deep. This gives plants a chance to grow in the tundra, but the growing season is short and stops when the ground freezes again.

The soil of the tundra is also nutrient poor, so it lacks nitrogen and phosphorus – two important elements plants need to grow. This keeps the plants small and makes plant growth slow. 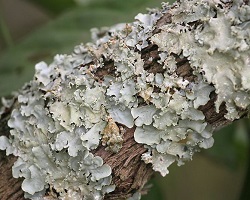 Because permafrost won't let roots grow very deep, plants that are shorter and need little to no soil are most efficient. Lichens, which are part fungus and usually part algae, don’t need extensive root or water-transportation systems. Image by Alex Proimos.

Though plants don’t grow very high or very fast when the soil is limited in water and nutrients, some adaptations can help with this.

For example, tundra plants are able to perform photosynthesis at low temperatures and low light intensities, unlike autotrophs in other parts of the world.

Soil is really important in any ecosystem, and the permafrost in the tundra is no exception. When the ground isn’t completely frozen solid, water can seep into the soil just enough to penetrate the top layer.

The tundra only gets a small amount of precipitation each year, but plants in the tundra are specially adapted to only need a small amount of water to germinate and grow.  Plants absorb what they can with their short root systems. 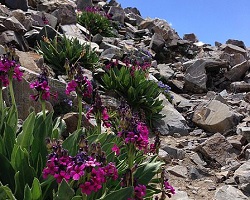 Colorful vegetation, like this Parry's primrose, blooms in summer on high elevation slopes. Image by Famartin.

With little sun, water evaporates slowly, making more available for plants or animals to use. Other non-animal organisms in the tundra that need a little water are microscopic bacteria, as well as algae and fungi.

The tundra is also a windy place. Plants will often grow in groups, as plants sheltered from the whipping winds are more likely to survive.

Animals, plants, and people have relied on the permafrost to stay frozen. What happens when temperatures rise? The permafrost melts. Recently, this has caused problems where there are buildings on tundra landscapes. They start to sink because the hard ground they once rested on un-freezes and gets softer. 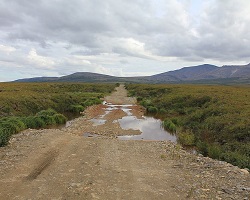 Melting permafrost can even affect roads. Click for more detail.

Warmer climates globally mean animals and plants can move outside of their usual range. Some species that don’t normally live in the tundra have moved farther and farther north and invaded areas of tundra because it’s getting warmer.

An even bigger problem is that carbon is released when the permafrost melts. Carbon is an element that makes up all living things, including plants. The dead plant material stored in permafrost starts to decompose in warmer-than-normal temperatures. That carbon turns into a gas and enters the atmosphere.

A lot more carbon in the atmosphere may have an effect on the Earth’s climate. You see, the tundra is a very sensitive place.

Despite all the features that make the tundra seem like an unfriendly place, there is diversity. 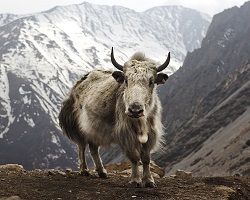 You can find 1,700 kinds of plants, like low shrubs, sedges, reindeer mosses, liverworts, and grasses. Four hundred varieties of flowers, such as crustose and foliose lichen, are also found in the arctic and subarctic. But compared to other biomes, that’s actually not a lot, making this a low-diversity biome.

Just as life for humans would be difficult in the tundra, species from the tundra couldn’t live without it or in any other biome. They’re adapted to the unique features of the tundra, which makes it important for us to help the biome persist. 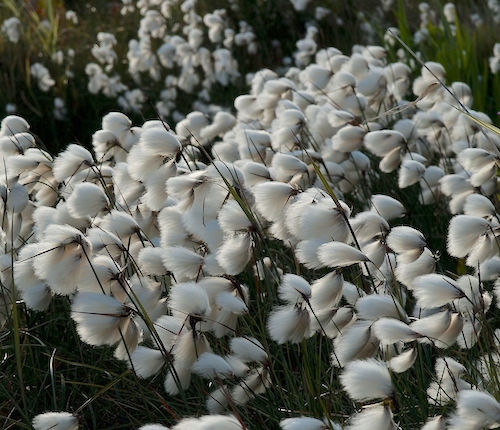