Germs: include bacteria, viruses, and anything that isn't supposed to be in our bodies.

Lymph: a fluid that circulates through your body, helping to fight infections.

T-cell: cell that activates a response from the body's immune system.

How the Body Repairs Itself

Ouch! You just got a paper cut on your finger. What happens now? Besides the sting you are feeling from the cut, there are germs on that paper that are preparing to invade your body. For your immune system, this means war.

Before you jump in to learn about how our body defends and repairs itself, take three minutes to watch Viral Attack. The movie introduces you to the cells that battle against germs like bacteria and viruses. After the show, you can dive into the story and read about each cell. 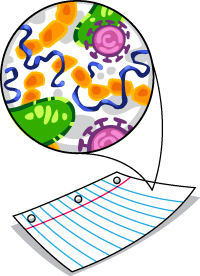 An illustration showing germs on paper. As soon as the paper cuts into the cells of your skin, your body springs into action. First, blood cells called platelets join together at the paper cut and form a clot to stop the bleeding. The platelets then release chemicals called cytokines into your bloodstream. Cytokines attract the attention of certain cells to start healing your cut. They also alert your immune system to scan for infection in the injured area. You will notice the injured area swelling and getting red as all the cells that the cytokines called rush to the scene. This swelling is called inflammation.

As soon as the paper cuts into the cells of your skin, your body springs into action. First, blood cells called platelets join together at the paper cut and form a clot to stop the bleeding. The platelets then release chemicals called cytokines into your bloodstream. Cytokines attract the attention of certain cells to start healing your cut. They also alert your immune system to scan for infection in the injured area. You will notice the injured area swelling and getting red as all the cells that the cytokines called rush to the scene. This swelling is called inflammation.

As the germs from the paper begin to attack your body, several different immune cells also come to help fight them off. There are cells that hang out just beneath your skin and wait for germs.

These cells are called neutrophils and macrophages. Neutrophils are a sort of jack-of-all-trades white blood cell. They can defend against invaders by eating them, firing anti-microbial proteins at them, or by setting web traps outside of the cells, to catch and kill them.

The macrophages are "big eaters" that function like dump trucks. They go around underneath your skin and collect all the "garbage" that isn’t supposed to be there. The "garbage" can include damaged cells or bacteria that can cause infection.

The lymph system includes the organs and vessels shown here.

Neutrophils are the most common white blood cell in your body, so an invading microbe is most likely to meet a neutrophil first. Neutrophils start fighting the invaders, and send off signals to attract other neutrophils and other cells.

Macrophages also come into contact with the invader pretty quickly. They start eating the invaders that they can, and they report their findings to the lymph nodes.

Two types of cell defenders, inactivated T-cells and B-cells, live in your lymph nodes. Here, they wait for a chain of communication to begin.

The macrophage has to report its findings to a dendritic cell that is also waiting inside the lymph node. The dendritic cell then reports the information to the T-cells and B-cells. Then these cells can activate, and jump into action.

The lymph system is a special route through which immune cells can move around the body.

The major parts of this system include the lymph nodes, the thymus, spleen, tonsils, and bone marrow. In these organs, immune cells grow, multiply, or are recycled, keeping the immune system running. Lymphatic vessels run alongside your veins, delivering immune cells throughout the body.

Neutrophils have many ways to try to fight off an attack.

At the start of any infection, all invaders are treated the same. Macrophages can eat individual germs, but usually aren’t able to destroy all of the germ invaders, so they have to go get help from other cell defenders. After a macrophage eats a germ, it takes the most unusual pieces of the germ, called antigens, to your lymph nodes. Here it meets the dendritic cells again. Dendritic cells will take the antigens (like ID tags) from the macrophages and show them to the inactivated B-cells or helper T-cells.

The neutrophils also try to stop the invasion quickly, but they also call for back up. While swallowing some invaders and spraying others with chemicals, neutrophils send chemical messages to attract more cells to the wound. 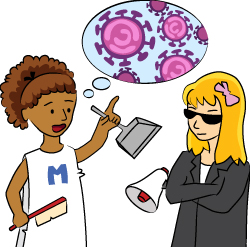 The macrophage tells the T-cell what it found.

One of the other first defenders, a type of T-cell called the helper, acts like the “commander” of your immune system army. When the macrophage enters the lymph node, it finds the dendritic cell and reports what it found on its patrol of the skin.

The message moves again, up the chain of command. The dendritic cell reports the invaders to the inactivated helper T-cell commander. The helper T-cell now knows what kind of invader it's dealing with. It seems a war is needed. The T-cell activates into a full-fledged commander!

The T-cell makes a plan of action.

If the number of invaders is very, very small, sometimes the neutrophils and macrophages can take care of it on their own. This can stop a major infection from starting. But, once the macrophage presents information to a dendritic cell, the commander has to be told. A plan of action must be made.

Sometimes, the danger is great. During times like this, the body has special fighters. Just like wrestlers come in different age and weight classes to match an opponent, some T-cells are made for certain germs. The special fighter T-cells in your immune system are called killer T-cells. The helper T-cells can go into the lymph node and find the one killer T-cell matched to the invader and call them into the fight. 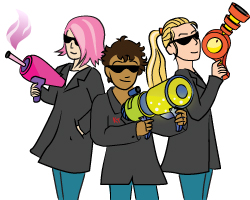 T-cells to the rescue!

The macrophage shows the ID tags (antigens) from the invader to an inactivated killer T-cell. This cell then activates and makes more and more copies of itself. This army of killer T-cells will follow the path of cytokines to the injury and begin the full-scale attack against the germs.

These activated killer T-cells scan all the skin cells around your paper cut. They try to find the special antigen that marks invader cells. The antigen can even alert them to an invader if its hiding inside of one of your skin cells.

Once that antigen is found, the killer T-cells shoot out cytotoxins that destroy the antigen and any skin cell it has infected. The macrophage then comes and gobbles up the dead, germ-filled skin cells to keep your system clean. 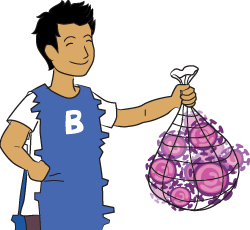 Finally, depending on the type of germ, the helper T-cell can ask the B-cell to join in the fight. This last defender, the B-cell, is important because it can trap, or mark, the germs that haven't yet infected a cell.

The B-cell shoots out antibodies, which we can think of as nets. The nets are called immunoglobulins, and they look like the letter “Y”. Germs are caught in the fork of the “Y” and neutralized so they can’t infect your body.

Just like the killer T-cell, the B-cell will make more and more copies of itself in your lymph nodes before it heads to the infection. When we feel swollen lymph nodes, it’s because our activated B- and T-cells are making armies to fight germs! 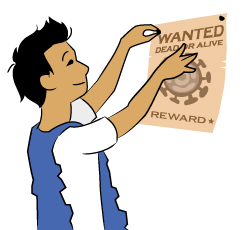 Germs that T- and B-cells have fought off successfully are remembered so they will be easier to fight in the future.

When all germs are destroyed, the battle is over. The B- and T-cells go back to your lymph nodes, and the macrophage returns to patrol the skin, looking for new infections. The B- and T-cells that have fought the infection in your skin now have experience fighting those specific germs so they become memory cells.

Memory cells give your body a great advantage if you get infected by the same germs. The memory B- and T-cells get a huge head start and can build their cell armies in half the time during the next germ invasion.

For more information on how the immune system battles invaders in the body, visit Viral Attack.

About the author: Kimberly Repp is a local government public health epidemiologist in Oregon and a graduate of Arizona State University. Her research has shown that surfaces like bathroom counters can spread disease – even if they don’t look dirty. So be sure to always wash your hands. She also teaches at the Health Professions graduate campus at Pacific University in Oregon. 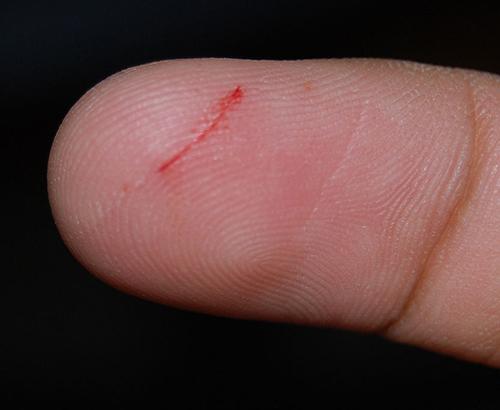 Beneath a fresh paper cut, a whole war is just beginning.

If you like this story, check out our Viral Attack comic book.