Bask: to lay in the sun or in warmth, often to change body temperature.

With a name like monster, you may think Gilas must be lean, mean, eating machines. But they actually only spend a part of the year looking for food. Gilas have very seasonal behaviors—things they do during certain parts of the year, but not others. Let’s take a look at a chunk of Gila monster time.

A Year in the Life of a Gila Monster 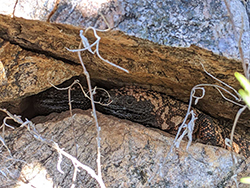 During the winter, in some locations, Gila monsters can be spotted near the edge of a crack or a burrow, getting a bit of warmth. But these Gilas aren't always alone. Click for more detail.

During cooler months of the year in Arizona (from end of October to beginning of March), Gila monsters don’t do a lot. They “overwinter” in their burrows. Overwintering isn’t exactly like hibernating as they don’t really enter a deep sleep, but it does mean they are inactive most of the time. If there is a really beautiful, warm day though, they might go to the edge of their burrow to bask.

For Gilas, winter is basically just a long, cold period with no food and little activity. As soon as spring temperatures warm up, Gilas do a lot of basking during the day and start searching for food. Because they raid the nests of other animals, Gila food is only available during certain seasons. Therefore, they need to store plenty of fat and water to get them through the hot, dry season (late spring through mid-summer) when both food and water can be non-existent. Near the end of May, they also use up a lot of this energy during the mating season. 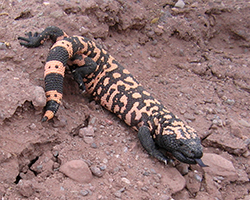 Male Gilas start to seek out mates in late May each year. Image by Roger Repp.

In mating season, males go out in search of females and may even wrestle each other to try to win a mate. They use their bodies and tails to try to overpower one another and will even bite to gain an advantage. Gilas mostly mate in May, and then they go underground and mostly wait for the dry summer. Very little activity occurs in June. During this time, Gilas are hidden away in their burrows, reducing the water loss that would occur if they were more active.

When the monsoon hits (usually in early to mid-July), their activity explodes. Gilas get enough to drink, and there is plenty of food around for them to find. But, daytime temperatures are extremely hot. Gilas work around this by switching their activity to mostly at night (nocturnal) and at dusk or dawn (crepuscular).

During late July, some females are ready to lay eggs. They move around most evenings, looking for a good nest. Gilas don’t make their own burrows—they modify the burrows of other animals. After finding a good nesting spot, females lay about four to eight eggs. Then, their job as parents is over—they leave the nest while the eggs develop.

For the rest of the monsoon season, adults will try to save up enough fat and water stores to get them through autumn and winter. They search out active nests on or below ground where they can find young mammals or eggs to eat. Their activity starts to quiet down in September, soon after the monsoon ends. In September, food becomes scarce again and temperatures start to cool down. 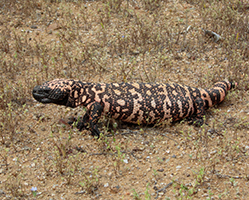 When you see Gila monsters outside of their burrows, you almost always find them alone. Click for more detail.

Meanwhile, the females’ eggs that were laid in July have almost fully developed. They should be ready to hatch in late October or early November. The hatchlings, however, will stay inside of their burrows (but out of the eggs so they can defend themselves) until the next spring or early summer. At that point, temperatures warm up enough for them to become active. With the warm temperatures, other smaller species of lizard start to mate and lay eggs. These tiny eggs are important food for juvenile Gilas. With enough warmth and food available, the little Gila monsters finally leave the burrows in which they hatched.

Learn more about this Gila monster behavior at our Top Question, Can Gila Monsters Climb Trees?