Two baby cottontail rabbits are nestled in the shade of a brittle bush. They stay perfectly still, hoping they won’t be noticed. But a Gila monster has already picked up their scent. The Gila slowly works her way toward the hiding spot of the rabbits. As she moves, she flicks her tongue every few steps, and her tail is raised behind her, parallel with the ground. 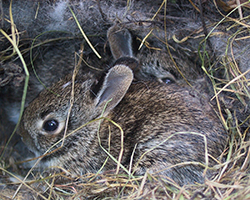 Two baby bunnies in a nest. Click for more detail.

She slows near the bush, and her tongue flicks faster. She knows she is close. But as she starts to work her way into the bush, the rabbits realize they are in danger. They are just barely big enough to hop off out of danger, and they escape just in time.

Gila monsters find delicious what most people find adorable. They feed on the young of other vertebrates, like kangaroo rats, rabbits, or even the eggs of quail and tortoises. And young Gila monsters that are too small to eat these feast instead on the eggs of other, smaller lizard species.

Other reptiles that eat rodents or rabbits are often what are called sit-and-wait predators. Rattlesnakes, for example, will select a spot along a trail that their prey use and will sit there, waiting for something they can eat to pass by. Gila monsters, however, actively search for their food. They explore the land and wander into burrows, sniffing out prey hidden on or below the ground in nests. 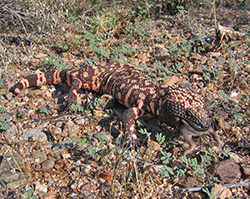 When Gilas find a meal, they stuff themselves with as much food as they can hold. Sometimes this can be about a third (~30%) of their weight. If an adult human ate that much, it would be like eating two to three turkeys in one sitting! Being able to eat so much at a time is important for animals that store a lot of energy. Gilas need to store fats so they have enough energy to get through the long parts of the year when they can’t find food. They have space to store these fats in their tails, like other lizards do, but also in their abdomens. These fat stores are important for them to live through the winter, as well as the dry, hot summer.

Gila monsters may go for months without eating a meal. Then, they might eat a huge meal that results in the need to process a large amount of nutrients in a short amount of time. Because of this binge-feeding lifestyle, scientists thought Gila monsters, as well as their cousins, the beaded lizards, might have proteins that could be helpful to human health. They thought these could be especially helpful for treating diseases associated with the processing of food (or energy). 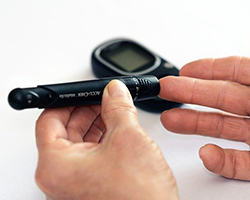 Gila monster proteins are now being used to help people with diabetes regulate their blood sugar levels. Image by Photo Mix from Pixabay.

In most animals, including humans, blood sugar is a very changeable thing. Every time we eat, our blood sugar rises. Our bodies release hormones that help us take up and use or store these sugars. But sometimes our bodies aren’t able to process blood sugar, making it hard for us to use the sugars. This situation can cause the disease diabetes.

Researchers found a special protein in beaded lizards that can help regulate blood sugar in humans. A similar protein in Gila monsters proved to be even more helpful. This protein is called exendin-4. Scientists now make a molecule similar to exendin-4, called exenatide (often known by its trade name Byetta).

Byetta is used to manage blood sugar in humans who can no longer manage it very well on their own. It’s so useful that you might even say Gila monsters are monster helpers for diabetes and human health. But the oddest part of the story is that exendin-4 doesn't regulate blood sugars in Gila monsters. Researchers are still working to understand its function in these animals. 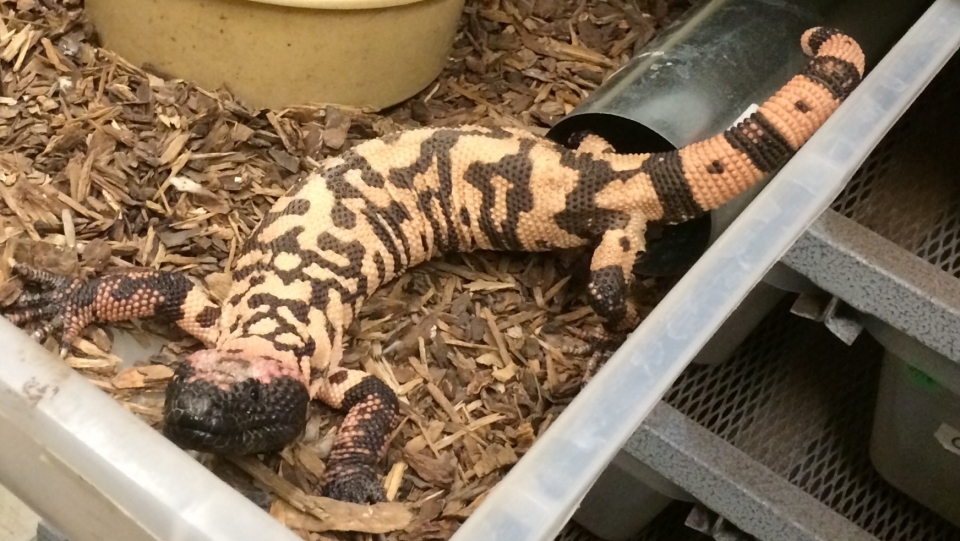