Out in the hot deserts of Arizona lives a creature with bumpy orange and black skin, long claws and a venomous bite. If you happen to go on a hike on a cool spring morning, you just might be lucky enough to spot one of these monsters slowly strolling across the sandy desert floor, searching for its favorite food — eggs. They love to crack them open and slurp out the gooey insides with their long tongues. 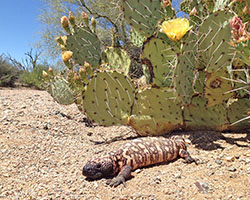 Finding a Gila monster in the desert is a rare treat. Click for more detail.

But don’t be afraid if you see this monster. Despite having “monster” as a name, they are actually quite shy. They only bite if someone tries to touch them or pick them up.

Lately, ASU biologist Melissa Wilson Sayres’ mind has been teeming with monsters — Gila monsters, that is.

She is interested in understanding the recipe for what makes the Gila monster so unique. Soon, she will be the first person in the world to see the key ingredients — the entire length of what a Gila monster’s DNA looks like.

On her computer, a Gila monster genome will look like a series of the letters A, T, G, and C written over and over in different orders, in a unique pattern. Getting the full sequence of DNA letters will help her find new clues into Gila monster life. Melissa understands the code and will be able to use it to try to understand how Gila monsters grow, live, and survive in the desert.

Gila monsters are very unique lizards. They survive in a sometimes harsh desert habitat, but in a very different way than most lizards. They can take one big drink of water, fill their bladders up like a canteen, and survive for up to two months without another drink. Likewise, they can feast on a big meal and store the food as fat in their big bodies and tails.

They also escape the hot surface of desert sands by spending the hottest times of summer in underground holes, called burrows. Because they spend much of their time in burrows, they can be very difficult to find in the desert, so scientists don't know how many there are. One way to find out if Gila monsters are in danger of going extinct is by looking at their DNA. 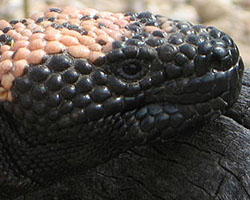 A protein in Gila monster venom is being used to treat diabetes. Click for more detail.

Melissa can use their DNA to see how similar one Gila monster is to another one. It may also help them uncover ways that Gila monsters deal with problems that humans may also experience, such as changes in blood sugar levels. Scientists have already used Gila monster spit to come up with a new treatment for the human disease diabetes.

All of the Gila monster DNA is spooled up in 36 chromosomes. Melissa is particularly interested in the DNA in two of the chromosomes. These two chromosomes are responsible for determining the sex of the lizards. If a Gila monster has one large and one small sex chromosome, it is female, and if it has two large chromosomes, it is male.

Getting Lots of Genomes

Sequencing the Gila monster genome will give Melissa a new chance to make important comparisons between the DNA of different animals. Before the new Gila monster project, Melissa had always studied mammalian genomes. Most of her research focuses on studying sex chromosomes in mammals, including humans. 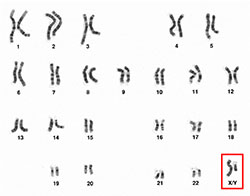 This is a human male karyotype, which is an image of all the chromosomes of that individual. Click for more detail.

In one project Melissa looked at the DNA from more than 1,000 men from all over the world. She looked closely at the male Y chromosome (found in DNA from the nucleus of a cell) and special DNA from the mitochondria, which is the powerhouse of the cell. While your nuclear DNA comes from both your mom and your dad, mitochondrial DNA is passed down only from your mom.

Using a computer and math programs to model how the DNA changed, Melissa was able to determine that, around 4,000 years ago, the human population had thinned out and was in real danger at one point. She saw this from a loss of some unique DNA. This is called a population bottleneck. For the first time, the story of human history and more recent population expansions across the globe could be read from human DNA.

Melissa also used DNA, math, and computer programming to show that although most human females have two large XX chromosomes, and most human males have one large X and one small Y, that is not always the case. Although we know a lot about DNA, there is so much more that we don’t know. And when it comes to sex chromosomes, Melissa is on the case. 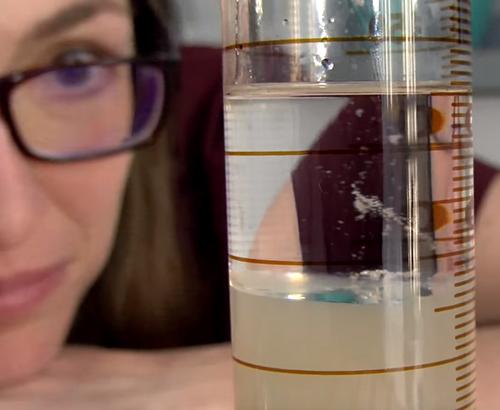 Want to do a bit of DNA studying too? Visit the Seeing DNA activity to find out how to get DNA out of a banana.