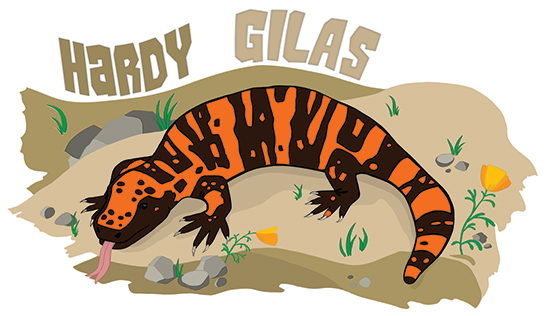 Bladder: a body organ that holds urine before it exits the body; not all animals have bladders, and some animals can reabsorb liquid from the bladder...more 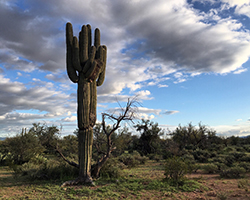 A saguaro is a type of tall cactus is found in many parts of the Sonoran Desert. These cacti can take years to grow just a few inches. Click for more detail.

Saguaros line the horizon as you hike through the desert near Tucson, Arizona. You step over a cactus skeleton, take a detour around a spiny-looking tree, and come to the dry wash where a stream sometimes flows. As you pause to find the easiest way down into the wash, you see some movement out of the corner of your eye. Nearby, an orange and black lizard that is over a foot long is slowly walking across the wash, its tail held above the ground.

You’ve spotted a Gila monster, a venomous lizard of the Sonoran Desert. You watch quietly as the Gila monster stops to flick its tongue at the entrance of a small hole in the wash. It uses its small but muscular arms and long claws to dig up sand as it searches for its food. Gila monsters feed on young animals that live in nest on or under the ground. 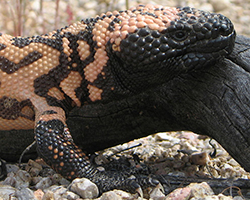 Walking around the desert looking for active nests may seem like a really hard way to find a meal. For humans, it would be. But Gila monsters and their ancestors have found food this way for around 100 million years. They have a great sense of smell, and they have sharp teeth and venom to help protect them while they search for food. Their ancestors may have been digging up nests during a time when dinosaurs roamed the Earth. It’s no wonder that watching their behavior makes you feel like you are looking into the past.

Imagine living in the desert hundreds of years ago. Most of the animals you came across were colored for camouflage—they blend in to the sandy, brown surroundings. What would you think if, one day, you stumbled across an animal that was orange and black? And it was not only surprising in color… if you came near it, it would hiss at you and open its mouth to show off sharp teeth and a dark tongue? 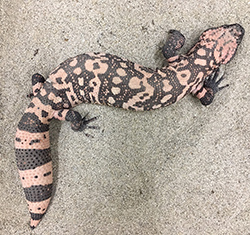 A Gila monster's orange and black coloration can do two different and important jobs. Click for more detail.

With such unusual colors, you might think you had come across a magical or especially dangerous animal. Legends began to spread about these “killer” lizards, how they spit venom, and had killed many people. Some indigenous peoples believed the Gila monster could control the weather, bring good luck, or cause sickness. While some of the legends remain untested, we do know that Gila monsters are not dangerous if you leave them alone.

Even if a Gila monster bites someone, their venom is not as dangerous as rattlesnake venom. It is usually only dangerous in the rare case that someone is allergic to the venom. Though Gila legends are interesting, the ways they survive in the desert may be even more legendary.

Gila monsters have some impressive adaptations for desert life. Their bladders act like built-in water bottles, they can store fat in their tails to use for energy, and they can eat huge meals in one sitting. They also change the time they are active throughout the year and use underground burrows to avoid the worst of the summer heat.

Gilas don’t have sweat glands the way that we do, but they lose water across their skin, which also helps them cool down. When they are aboveground, they have orange and black colors that act as both camouflage and as a warning to predators: “Beware! We have a painful, venomous bite.” 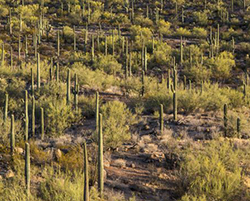 Survival in the desert is a challenge for many plants and animals.  Image by Bob Wick, BLM.

Even though Gilas have all of these great adaptations and strategies to survive in the desert, they may still be in danger. Humans build cities and homes on Gila territory, shrinking the land they have available. Many people are also frightened of Gila monsters and may hurt them if they see them. Additionally, survival may become more difficult due to climate change.

Gila monsters rely on the water from both spring and monsoon (summer) rains in the Sonoran Desert. Many animals are already pushed to the edge of their ability to survive the long hot, dry season. Climate change may cause the timing and length of that season to change. If it gets any longer, these bumpy monsters may have a rough time surviving. 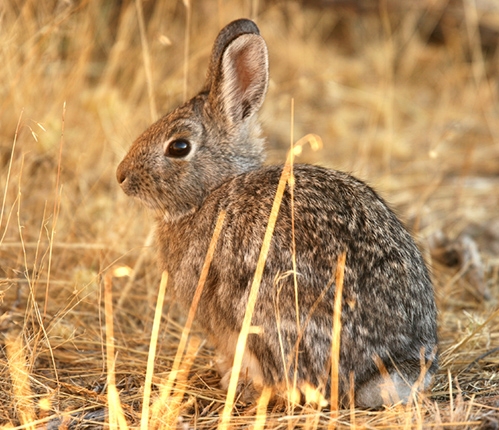 Gila monsters feed on baby animals that nest on or under the ground. This might include baby rabbits, mice, rats, bird eggs, or other nestlings.