Gravity: the attraction of one body to another. Gravity gives objects weight and causes them to fall to the ground if dropped... more

Microgravity environment: an environment where there's almost no gravity so things look like they're floating.

How is a Low-Gravity Environment Created?

A space shuttle could travel from San Diego to New York City in less than 10 minutes!

When we think of astronauts, we often picture people in suits floating in one spot in space. In reality, astronauts are usually in space ships that are in orbit around Earth, traveling extremely fast. Earth’s gravity pulls space ships down towards the ground, but since ships go as fast as 17,320 miles per hour (or 27,870 kilometers per hour) they stay in space. At this speed, you could travel from San Diego, California, to New York City in less than ten minutes. 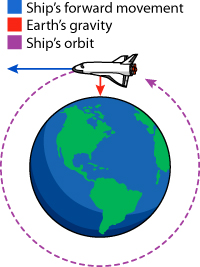 As gravity pulls the space ship towards Earth, the speed of the ship keeps it moving forward, and these movements combine until the shuttle is traveling in a circle. As Earth is a sphere, travel in this circle lets astronauts fly around the Earth. So when someone is flying in orbit, they are basically falling all the way around Earth.

Since everything inside the spacecraft is falling at the same rate, there is very little gravity, and everything floats. This allows people to swim through the air, hold a hand-stand as long as they want without sweating, or have a slow-motion game of catch. This is called a microgravity environment because gravity still has an influence, but it is so small it is nearly impossible to measure.

Read more about: Spaced Out Physiology 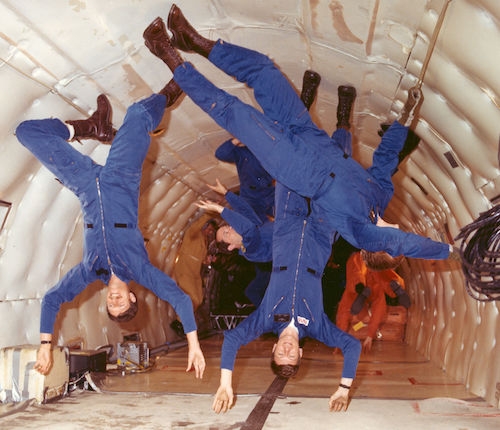 Astronauts training onboard the NASA KC-135 (vomit comet) experiencing weightlessness. The plane flies on a special path to produce periods of microgravity.