Electron: an important type of atomic particle that has a negative electric charge.

Have you ever wished you had x-ray vision? Well, wish no more. Today, we will give you the power of x-ray vision...but only to look at the inside of a beetle. 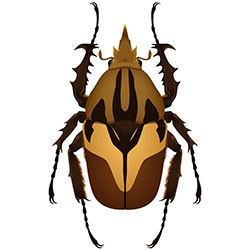 Watch the x-ray video below to see x-ray images from the side (lateral) view of a female Dicronorrhina derbyana beetle. You can find additional x-ray videos at the bottom of the page. If you've already played with the Beetle Dissection tool, try to identify some of the same tissues you've already seen. Or you can view this before dissecting the beetle to learn a little about what you will see in the dissection. You can also work through the x-ray dissection worksheet as you watch.

In the video, below the x-ray images, you will see a 3-D version of the beetle that was created using x-ray images. A line will travel through the beetle as you view the movie. This line shows the layer of beetle you are viewing in the x-ray. Every new image is a new layer of the beetle. Thousands of images (layers of x-rays) were used to build these beetle videos.

You can toggle slowly through the videos by selecting and controlling the location of the sliding box. Pay close attention to the brightness of different parts of the beetle and how its structures change throughout the body. How can scientists use these images to learn about beetle anatomy and physiology? How could images like these be useful for learning about other animals and objects?

Why are X-rays Important for Science?

X-rays are important tools for scientists. They are used to view the insides of organisms and to monitor the health of animals and humans. They also help biologists learn how the parts of animals fit together. You are most likely familiar with x-rays at the dentist’s or doctor’s office. These x-rays take images focused on your teeth and bones to diagnose unhealthy teeth or broken bones. However, there are also other types of x-rays. The type of x-ray images that Ask A Biologist scientists used to view beetles are called High Resolution Micro Computed Tomography, or MicroCT.

CT may sound familiar, as you or someone you know may have received a CT scan (also called a CAT scan). These tests are used to view tissue in humans and some other animals. MicroCTs use the same technology, but on a much smaller scale, to get images of tiny organisms, like these beetles. 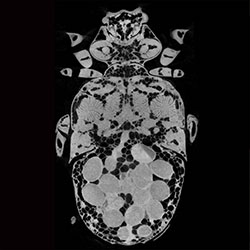 X-ray imaging usually lets you see the tissues inside of an organism or other object.

The energy in x-rays allows them to pass through materials, like body tissues. X-rays enter materials in focused beams of electrons. The electrons travel through the air until they hit a material, like body tissue. A material will absorb the x-rays better or worse, depending on the types and densities of atoms found within the material.

High resolution MicroCT stands for Micro Computed Tomography. It is also known as Microtomography or just High Resolution Tomography. MicroCT is a technology used by scientists, engineers, and doctors to visualize structures ranging from oil wells to fossils and body parts. 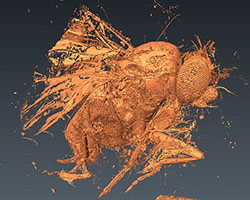 An image of a fossilized fly made with Micro CT. Click for more detail.

To use MicroCT, an x-ray beam is directed at a structure. That structure absorbs some amount of x-ray energy depending on its density, or the amount of tissue that is in an amount of space.

In the case of the beetle, most of the x-ray passes through the beetle’s body to a sensor, which is like a fancy digital camera that can “see” x-rays. Denser tissues absorb more x-rays than less dense tissues, so fewer x-rays pass through, and the dense tissues appear lighter in these images.

The sensor surface receiving the x-ray information creates a digital version of the image created by the x-rays that pass through the beetle. This sensor delivers that information to a computer, which stores the image. Then the beetle is rotated a tiny amount (1 degree) and another x-ray picture is taken.

The beetle in the video above was rotated and x-ray pictures were taken 180 times. A software program converts these two-dimensional images into a three-dimensional model. The “micro” in MicroCT comes from the ability to see very tiny structures in the range of micrometers. That sounds really small, but just how small is it? Well, there are 10,000 micrometers in one centimeter!

The three-dimensional models created by MicroCT can be viewed in different ways. In the image below, the information has been reversed, so that the denser structures appear darker. The image was colorized, meaning color was added.

A Micro CT image of abdominal air sacs that has been reversed, so the denser structures are lighter. Click to enlarge.

MicroCT Versus Other X-rays

MicroCT differs from “normal” medical or dental x-rays because it allows us to see very small structures and build 3-D reconstructions, or models, of them. This is because MicroCT uses many high-resolution images.

Normal x-ray radiographs are the x-ray images produced by doctors when diagnosing broken bones. As with MicroCT, the x-rays are directed at the body. The denser structures (such as bone) absorb more x-rays. Some x-rays pass through the body and are absorbed by the sensor. Your bones appear bright in these x-rays because bones absorb a lot of x-ray energy. 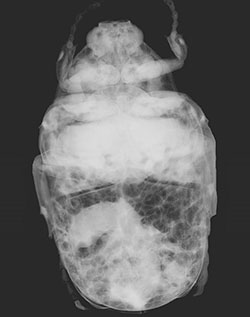 An x-ray like the ones you get at the dentist make it difficult to see structures in detail. Click to enlarge.

However, in any single normal x-ray radiograph, it can be difficult to see structures. It's difficult because x-rays pass through multiple structures within a body, and each structure may have a different density. This beetle x-ray is similar to a radiograph you may get at the doctor’s office. Notice how fuzzy it is compared to the MicroCT images on this site.

What Can we See with MicroCT?

MicroCT allows us to see many tissues of an animal’s body that have different densities. Tissue density is the amount of tissue packed into a specific amount of space. Tissues like bone have very high densities and appear brightest, while tissues like muscle appear less bright. Air spaces are the least dense and appear black.

When is MicroCT Useful?

MicroCT is a useful tool because it allows scientists to see structures in animals that are very difficult to view with other methods. For example, air sacs and tracheae often collapse when insects are dissected. You can view this in the beetle dissection.

Air sacs, tracheae, and other structures can also be very tiny and easy to miss with other methods. MicroCT allows scientists to trace them through the body or other structures to build models, like this one, of the flight muscle tracheal system of the fruit fly. When these models are viewed in 3-D, we can move them around and look at structures in new ways to learn more about them.

Beetles were scanned using a SkyScan1172 micro-CT scanner equipped with a Hammamatsu 1.3Mp camera and Hammamatsu SkyScan Control software (SKyScan NV 2013) at Virginia Polytechnic Institute and State University in collaboration with Jake Socha. Julian Wagner, an undergraduate at ASU, did much of the work to create these movies. The National Science Foundation funded this project. 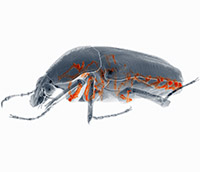 What do you think it would be like to have x-ray vision? Would everything get jumbled together or would features like airways stand out (shown here in orange)? Sneak a peek inside of beetles with special x-ray technology.