How are Insects and Humans Similar?

Humans and insects have very different bodies. But there are many ways in which the two are actually very similar. Because of these similarities, studying insect physiology is helpful for medicine and agriculture.

How much of your DNA do you think is the same as a fruit fly's? Would you have guessed 60%? That's right, 60% of the DNA code of fruit flies and humans is identical. That means that most human genes and insect genes are the same and function very similarly. 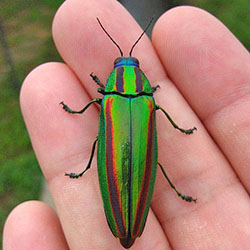 Chrysochroa fulgidissima, or the "Tamamushi" beetle, has more in common with humans than you might think. Image by Brian Adler.

Most of the enzymes made by insects and humans are also very similar. Muscle and nerve cells also work alike in humans and insects. We both have brains, hearts, digestive tracts, reproductive organs, and muscles that do more or less the same things. Humans and insects all require oxygen and food and they all produce wastes.

The anatomy and physiology of insects and humans are similar in many ways. All animals have organs that have different jobs within the body. Each of these organs is made of groups of different kinds of cells.

Some of the organs that both insects and humans have are made up of the same types of cells. For example, beetle skeletal muscles are composed of muscle fibers that have the same structure and function as human skeletal muscles. Fat body is distributed throughout the body of both insects and humans and this tissue is made up of lipid cells that sometimes also produce hormones.

The beetle brain is composed of many thousands of neurons that carry information using chemical and electrical signaling, as they do in the human brain. Insects also age and they can get diseases like cancer. You can find similarities between insects and humans in almost every body system, from cells to tissues to organs.

Insects and humans also have similarities in how they relate to each other. Like humans, many insects give gifts or sing for potential mates. They also fight for territory. In social insects, as in humans, different individuals do different jobs. Armies wage war, queens give birth to all of the workers of a colony, and insects can work together to build large structures.

How are Insects Different from Humans?

It sounds like we have a lot in common with insects. So what are the differences besides body size and shape? Let's take a closer look. 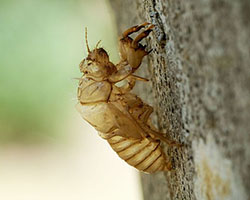 Insects have a strong exoskeleton, which is molted as they grow. Click for more detail.

Instead of depending on bones for support, insects have a strong exoskeleton. While humans have lungs, insects breathe through air-filled tubes called tracheae that are found in different places on the body.

To deliver oxygen, humans use proteins in the blood. In insects, the tubes that allow oxygen into the body actually continue to get smaller and smaller, and pass alongside most cells in the body. Oxygen is delivered as a gas through the tracheae rather than dissolved in blood and bound to proteins (hemoglobin).

The nervous system of insects is spread out through their bodies, with several ganglia (small brains) and large nerves in different regions of the body. In humans, the brain and spinal chord are the central command centers.

Insect hearts are long open tubes instead of four-chambered pumping organs. Humans have kidneys that filter wastes out of their systems and help control water levels in the body. The Malpighian tubules and hindgut perform these same functions for insects.

Some organs are very different between humans and insects, like the heart. On the left is a human 4-chambered heart (just after a heart transplant) and on the right is the enlarged image of a long thin tube heart in a beetle. Human heart image by Vasily I. Kaleda; beetle heart by the Harrison lab.

The human liver removes toxins from the body. Insects do this with a widely distributed tissue called fat body (which acts like a liver in addition to storing fat and carbohydrate molecules).

Insects have compound eyes with many facets; humans have camera eyes with a single pupil each. Insects smell odors using their antennae while humans smell with their noses. Insects can taste with their feet as well as with their mouthparts, and some can even use their wings to taste.

How Do Scientists Study Insect Anatomy and Physiology?

Most insects are so small, it's tough to imagine all of those similar parts inside such a tiny body. How can we know all of these things are going on in something that is so small? 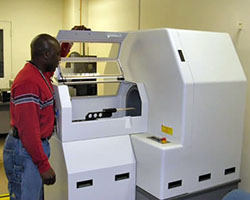 Special microscopes and advances in x-ray imaging let us see what is going on inside of these tiny insects. Micro-techniques allow measurements of most chemicals and functions of insect systems. This means insects are important to study, even with their small size. Because insects are small, it is also pretty easy to change the food they eat, their temperature, and other conditions in experiments. Some insects, like fruit flies, are excellent “genetic model organisms,” with genes that can be easily changed.

So… do you want to see inside of an insect? Check out our virtual Beetle Dissection, where you can look inside a beetle, right at your computer. Then, you can take a step further and look at images made with MicroCT (CT = computed tomography). These images allow scientists to create 3D digital models of insects based off of the densities of different tissues in insect bodies. This creates differences in brightness and contrast that show the outlines and borders of body structures. 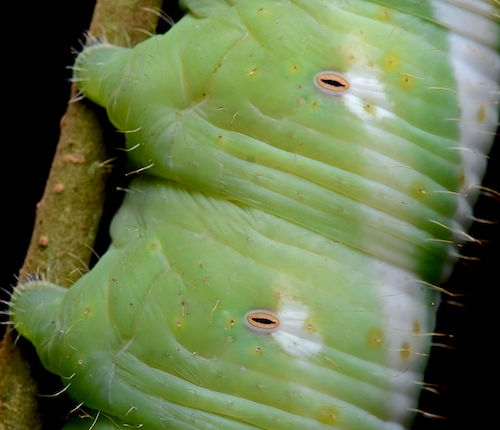 Insects and humans have a lot of similarities, but their breathing systems are very different. The small dark ovals on this caterpillar are spiracles.

For more on how insects breathe, visit Big, Big Bugs.