Abiogenesis: another word for the origin of life. It means something alive being made from something that isn’t alive...more

Monomer: a molecule that joins with other monomers to make a bigger molecule called a polymer.

How Did Life Begin?

If you’ve ever made a volcano for a school project you might remember how mixing simple kitchen items can create an explosion out of nowhere. When you bring together different molecules, sometimes they react and change, just like a homemade volcano.

A long time ago on Earth, over 4 billion years ago in fact, some molecules combined and made something that wasn’t just different, it was alive. This incredible event was called abiogenesis, which means ‘life from nothing’. It changed our planet forever. 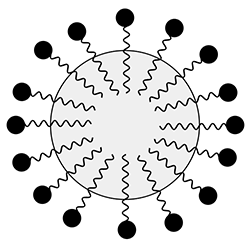 Cells had to develop through many stages before they were cells. One early stage, like this drawing, is of an oil bubble called a micelle. Later, molecules that could copy themselves found their way into a micelle. That may have been the earliest "cell."

The first living things were very simple, probably just a few molecules inside a cell that could copy themselves. Eventually they evolved and some became bigger and more complicated like plants and animals. We still don’t know what exactly caused life to appear. Astrobiologists hope that learning how life began on Earth might help us understand if this could happen on other planets. Let’s take a look at what you need to make life and at some theories about abiogenesis.

The Building Bricks of Life

When you build something out of LEGO bricks, you stick lots of smaller bricks together to make a more complicated product. Creating a living cell is similar. To start off, you want lots of organic compounds. These are molecules with carbon in them that help make up cells. Most of the more complicated molecules used by living things are made of organic compounds. However, scientists don’t think there were any of those on the very early Earth. This means that they must have been made later on. In 1952 Stanley Miller and Harold Urey showed that you could form organics by re-creating some of the conditions of the early Earth. They heated up certain gases and ran electricity through them like lightning in clouds. This experiment was a thrilling peek into how abiogenesis might have started. 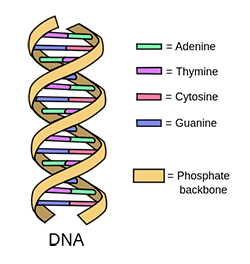 DNA is a polymer. It’s made of lots of smaller molecules called monomers that stick together using. The different colored ‘rungs’ of the DNA ladder in this picture are the nucleotides. Image by Forluvoft.

Once you’ve made organic compounds, you can combine them with each other to make bigger things, like sticking LEGO bricks together. The smaller compounds (like single bricks) are called monomers.  When those bricks join together, they are called polymers. For instance, amino acids are monomers, and they can stick together to form proteins, which are polymers. Proteins help to build cells, which then can form more complex living things. The DNA that tells your body what to do is also made from monomers called nucleotides. You can see how it takes lots of steps to get from the chemicals found on Earth several billion years ago to the world we know today.

The X Factor That Started Life

Lots of reactions only happen under certain conditions, like how a cake needs to be cooked to turn from raw batter to a delicious treat. So what was the special ingredient that helped get life going? Scientists aren’t sure yet and this is one of the big questions about abiogenesis.

Some researchers think that amino acids in water might have splashed on hot lava to make proteins. Alternatively, clay is known to speed up the chemical reactions that join DNA together. It can also shape the outside of cells which is an important feature. Another theory is that hydrothermal vents under the sea gave off enough chemicals and heat for things to get going.

A different suggestion is that the building blocks of life might have actually arrived from outer space. We’ve found amino acids on meteors, so one of these might have hit the Earth and started everything. As you can tell, there are lots of different ideas about how life might have begun. 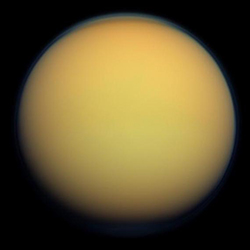 This is Titan, the largest moon of Saturn. It looks smooth and orange but really it has a rocky surface, its thick atmosphere just makes it seem smooth. We know it has lots of the organic compounds needed for life to form. That makes Titan a good place for astrobiologists to learn more about the early Earth. Image by NASA/JPL-Caltech/Space Science Institute.

Without getting in a time machine it’s hard to know exactly what happened. That’s why scientists try to recreate these reactions in their labs to see what happens.

It might also help to visit somewhere in space that resembles an early Earth. Titan, one of Saturn’s moons, has lots of organic compounds and a thick atmosphere. Because of these conditions, it could be a good place to study what chemical reactions are happening. For now, abiogenesis remains a mystery, but it’s an exciting one to try to solve. 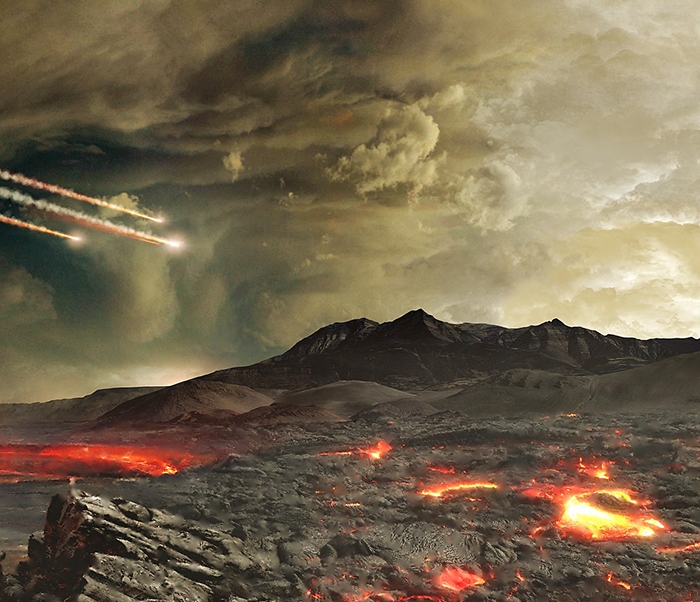 What did Earth look like when life began? This image shows a volcanic, hot Earth, showered by rocks from space.

How Did Life Start on Earth? | Ask A Biologist
Skip to main content