Can Marine Algae Change with the Climate?

Acidic: a solution that has extra hydrogen ions, or that contains substances that will easily lose hydrogen ions. ...more

Neutral: not acidic or alkaline; a balanced material that is not very reactive....more

Photosynthetic efficiency: the portion of light energy that a plant absorbs which it turns into usable chemical energy....more

You’re doing your homework and your stomach starts to rumble. You make your way to the kitchen to make a delicious grilled-cheese sandwich. You grab two slices of bread, cheese from the refrigerator, heat up the stove and prepare a delicious meal. Ahhh, now you feel great and can continue with your school work. 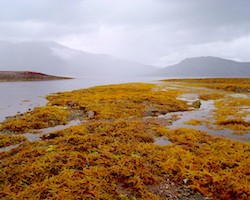 The intertidal zone is the area along a body of water that is exposed for part of the day during low tide. Image by Hugh Chevallier.

Algae living in the intertidal zone get hungry too. They are able to make their own food by combining light from the sun with carbon dioxide and water. This process is called photosynthesis. And just like you, algae need the energy to survive.

In the PLOS ONE article, “Effects of Ocean Acidification and Temperature Increases on the Photosynthesis of Tropical Reef Calcified Macroalgae,” scientists studied how climate change could affect algae living in marine ecosystems.

Algae are important in marine environments. They are at the bottom of the food chain, meaning many ocean creatures eat algae as their main source of food. To get the energy algae need to survive, they use carbon dioxide for photosynthesis. Yet, too much carbon dioxide in the ocean causes the water to become acidic, a process called ocean acidification. This could be very harmful to algae and other ocean creatures. 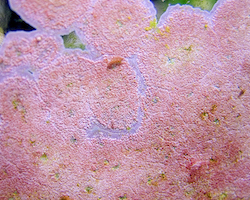 Some algae can help balance ocean acidification, by removing carbon dioxide from the water. Image by FalsePerc.

It’s important to understand how these changes affect algae, because some algae help balance ocean acidification. Algae can release enzymes into the water that can help quickly break down carbon dioxide into bicarbonate ions. The algae can then take up these bicarbonate ions and use them for photosynthesis and calcification. Calcification is the buildup of calcium carbonate (what shells are made of). This material allows these algae to have a hard texture, resembling a rock. This is why the algae can be called ‘calcifying’, because they are able to produce calcium carbonate from bicarbonate.

Climate change is causing carbon dioxide levels and the temperature of Earth to go up. Scientists predict ocean acidification and higher temperatures will be a problem for marine ecosystems in the future. An important step to understanding this problem is to know how algae may react to the expected changes. 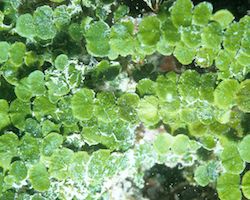 One of the species the scientists tested is quite similar to this species of calcifying macroalgae (Halimeda copiosa). Image by NOAA.

Carbon Dioxide: How Much is Too Much?

Scientists wanted to know how different species of macroalgae responded to an increase in carbon dioxide. They grew algae in tanks in which they could control the conditions of the water. They used four different treatment groups of varying carbon dioxide levels for each species, with four tanks tested per group.

In all tanks, the scientists measured how much of the calcifying enzyme the macroalgae produced. They also measured how these conditions affected efficiency of photosynthesis.

It’s Getting Hot in Here Now

Although these temperature increases do not seem high, they can make a huge difference to anything that lives in these waters. Imagine it’s a hot day and you’re studying for a test when the air conditioner stops working. At first, it does not affect your ability to study. But as the temperature increases by a degree or two, it can cause you to start sweating and slowly lose focus on what you are studying. If ocean temperatures increase too much, the algae will likely be affected. 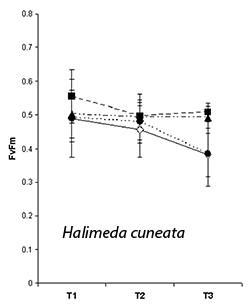 Only one species showed a difference in photosynthetic efficiency with a one degree increase in temperature. Click for more detail.

The Fate of Calcifying Algae

Some species of calcifying algae are not doomed with climate change. Imagine the algae that live on the part of the beach right along the water. Sometimes they are covered in water, other times they are exposed to the air. They are used to experiencing change in their environment. This may make these algae better at adapting (or changing between generations) to future conditions.

These experiments showed that, independently, temperature or acidic conditions expected with climate change did not harm these algae. Despite increased temperature or increased carbon dioxide, these algae species still made enough energy to survive. This means there may be hope for some species of algae. However, not all species of algae are this lucky, and many may be affected more seriously by climate change.

Colleen Musialski. (2018, May 15). Can Marine Algae Change with the Climate?. ASU - Ask A Biologist. Retrieved January 27, 2023 from https://askabiologist.asu.edu/plosable/algae-ocean-acidification

Colleen Musialski. "Can Marine Algae Change with the Climate?". ASU - Ask A Biologist. 15 May, 2018. https://askabiologist.asu.edu/plosable/algae-ocean-acidification 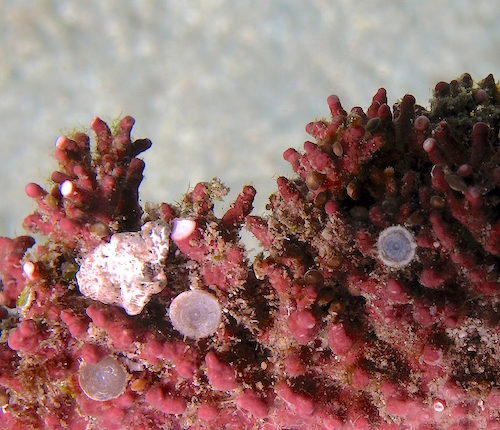 Some algae are called calcifying algae, because they create hard crusts out of calcium carbonate. These algae are important to reducing ocean acidification. But if temperatures and acidity start to rise, will these algae be able to survive?

Learn more about life in the sea by visiting the marine biome.