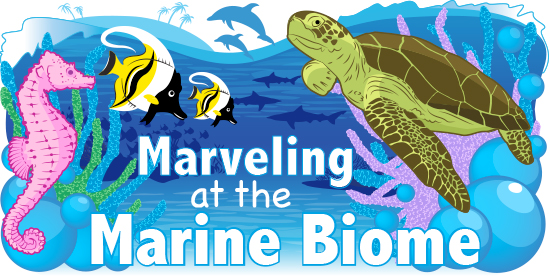 Mangrove: a type of leafy tree that lives along the coast. The mangrove's roots can survive in salty water.

Imagine a world no human eyes have ever seen. What sort of creatures might exist there? How could we even tell what was alive? No, I’m not talking about a distant planet or moon; I’m talking about the ocean – the marine biome. 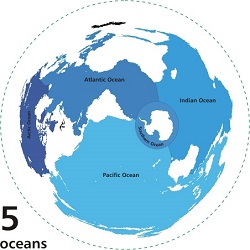 Most of Earth's surface is covered by the marine biome. Click for more detail.

The marine biome is the largest biome on Earth. It covers 71% of our planet, but we have only explored about 5% of its depths. Because the ocean is so big, scientists estimate that more than half of all species (or types of animals and plants) live in the ocean. Yet we can’t be sure how many that is because so many new species—over half a million—are still waiting to be discovered. That’s like grabbing a big handful of jellybeans from a jar and tasting less than half of all the flavors.

But the part of the marine biome we do know about is more than we can explain in one single biome article. That would be like grouping the other 8 biomes listed in this series together into a “land biome.” So, because the marine biome is so big and contains so much diversity, we decided to separate it into two marine biomes.

With an expanse as vast as the ocean, how can we divide it into two unique biomes? It turns out that as you get further and further from dry land, the ocean changes and so does the life within it. This is why we divide the ocean into a coastal marine biome and an open ocean marine biome. 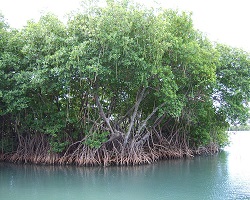 Most trees would die if their roots grew in saltwater, but not the mangrove tree. Click for more detail.

The coastal biome (which is also called the coast) is found near the shores, beaches, and sea cliffs where we stand and watch the waves roll in. This is where we find most of the environments we picture when we think of the ocean.  Here we could get lost in coral reefs, sandy beaches, mangrove forests, and fields of underwater sea grasses. Even though the coast is just a small sliver of the ocean, it is the more productive of the two marine biomes. This means the coasts hold more marine biodiversity, which provides food for many animals, including humans.

The open ocean stretches from the edges of the coast between the continents for hundreds of miles. This biome also dives beneath the ocean surface to the very bottom of the deepest ocean trench. As the largest biome, the open ocean covers over 45% of Earth’s surface. But compared to the coast, the open ocean is sparsely populated, almost like an ocean desert. 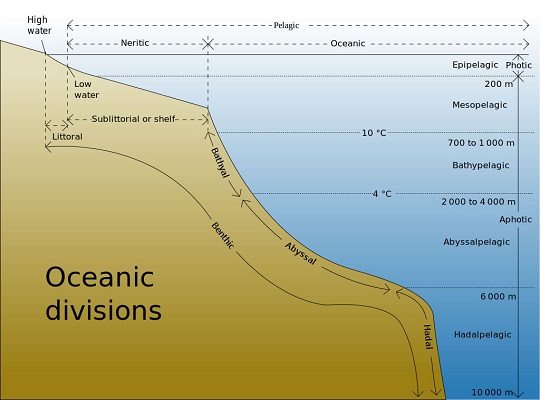 The ocean is a large place and can be divided up in many ways. Click for more detail.

The Well of Life 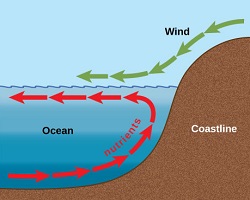 Upwelling happens when very cold water from the bottom of the ocean is pushed up to the surface. This carries nutrients up into the sunlight so that tiny creatures in the water can convert them into food. These creatures are eaten by fish, which are then eaten by birds, dolphins, and humans. Did you know that 90% of the seafood we eat is caught in the coastal marine biome?

Why does the water on the ocean floor have so many nutrients? The answer is kind of gross. When animals at the surface die or when they eat another animal, their bodies, leftover food, and poop slowly drift down, down, deep into the ocean. By the time these pieces get to the bottom, they fall to the ocean floor like snow. Scientists call this “marine snow”. Imagine sitting in eternal dark at the bottom of the ocean with animal pieces and poop constantly falling on your head.

How big of a role does the ocean play in your life? You might go surfing every day, or maybe you had fish on Friday. Maybe you live in the mountains and hardly ever think about the ocean. Even if you don’t think about the marine biomes every day, that doesn’t mean you don’t influence the ocean. Unfortunately this is often due to the things you throw away or dump down the drain. 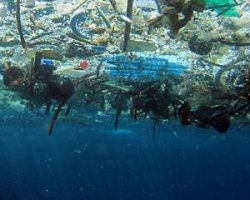 Plastics and other garbage can float on the surface of the ocean for years, eventually collecting into large groups of trash called marine garbage patches. Click to enlarge.

Chemicals can find their way into the ocean, like oil runoff from the street when it rains. Plastics are a big problem, too. Soda bottles, grocery bags, and Styrofoam can float down rivers or be blown by the wind for miles until they reach the ocean. Plastics can float for decades on the waves, or sink into the depths of the ocean.

Even though we have only explored a small section of the marine biomes, scientists think that we have influenced almost every part of it with trash and chemical pollution. Pollution ends up far away from where people live, so many people don’t see it. Much of the ocean is not owned or maintained by any countries or governments, though we get our food and oxygen from these biomes. So whose responsibility is it to maintain a healthy ocean? We all share that responsibility.

Read more about: Contemplating the Coasts | Observing the Open Ocean 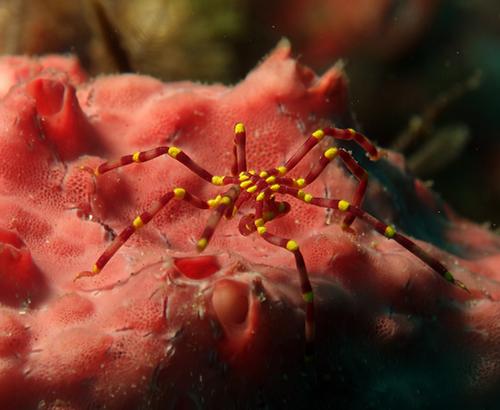 While this yellow-kneed sea spider feeds on other sea creatures, some sea spiders eat the dead matter that falls to the ocean floor like marine snow.