Debate: to discuss a question by considering alternative and opposing ideas

Validity: the best available estimation of the truth based on what is currently known.

X-chromosome: the sex chromosome, a thread-like molecule made of the chemical called DNA (deoxyribonucleic acid); females have two X-chromosomes, while males have one X-chromosome and one smaller Y-chromosome. 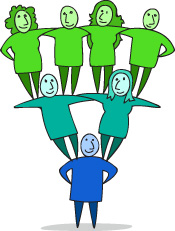 A reverse pyramid of people showing that to make progress, scientists depend on the work others in the past have completed.

While both Darwin and Mendel forged new fields in science—evolution and genetics—they stood on the shoulders of all the scientists who came before them. Men and women, who had devoted hours, weeks, and years to understanding the natural world. Both great minds came to conclusions so new and astounding that many refused to believe in their findings.

Science, like a caterpillar, often inches along, moving forward in small, incremental steps. Knowledge typically accumulates slowly. A scientist will present a new idea, often by publishing experimental results in a scientific journal. Scientists then debate the validity of this new concept, frequently by presenting more evidence that either supports or contradicts the prior finding. As additional evidence accumulates in support of a new theory, more scientists are willing to rethink their old beliefs in light of the new information.

The Danish geneticist Wilhelm Johannsen coined the term gene in his book on heredity in 1909, but at the time no one quite knew where genes were located. Johannsen lectured at Columbia University during this time, where Thomas Hunt Morgan bred thousands upon thousands of fruit flies, hoping to find a mutant.  Morgan’s goal was to study how traits are inherited. After two fruitless years of searching, he finally discovered what he had been seeking for so long—a male with bright white eyes instead of red. When he crossed his mutant fly with a normal female, he noticed that all of the male offspring were also white-eyed, but not the females. 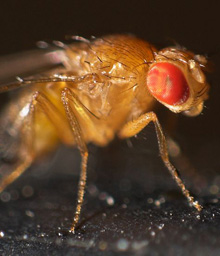 But there was still lots to learn. Chromosomes consist of DNA and protein. For many years scientists dismissed DNA as too small and unimportant, believing instead that proteins housed our genetic information. It took another three decades and a couple of nifty experiments before scientists established that genes were stored in our DNA.

Building on the earlier work of an English army doctor by the name of Frederick Griffith, a team of three scientists, Avery, MacLeod, and McCarty, showed that DNA was most likely the storage system of our genetic information. (See an animation of the experiment here: http://www.dnaftb.org/17/animation.html ) Many feel the trio of scientists should have received a Nobel Prize for their discovery, which proved to be a turning point in genetic research. They were nominated, but they never received this coveted award.

Scientists are often a skeptical bunch. Many still wanted more evidence. A further experiment by Alfred Hershey and Martha Chase in 1952 conclusively showed only DNA and not proteins were passed on to offspring. Scientists finally believed DNA was the key to our genetic inheritance.

Once we knew DNA was the blueprint for our genes, the race was on. Who would be the first scientist to solve the structure of DNA? The competition between rival research labs was fierce. Watson and Crick cracked the structure, but only after a colleague Maurice Wilkins from a rival lab showed them a crucial piece of evidence—an X-ray picture taken by biochemist Rosalind Franklin that demonstrated DNA existed in a spiral-like shape known as a helix. Watson and Crick published their findings in 1952 in Nature, the other leading scientific journal. They earned a Nobel Prize for their efforts. Rosalind Franklin would have been recognized too, except she died from cancer when she was 37 years old—the Nobel Prize is only awarded to living scientists.

To this day we are still discovering new details about our DNA. What was once disregarded as “junk DNA”—all the DNA that did not contain a specific gene—is now a hotspot for research, as scientists discover how it plays a role in turning genes on and off at just the right times. Scientists continue to advance our knowledge, one small step at a time. 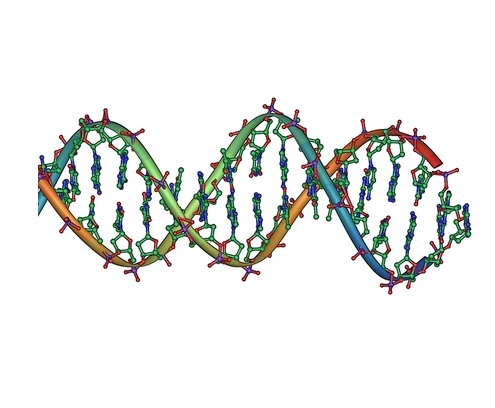 Many different scientists have contributed to our understanding of genetics and DNA.