Scorpions are of the class Arachnida and are considered relatives of spiders and ticks. As arachnids, scorpions have mouthparts called chelicerae (jaws), a pair of pedipalps (pinchers), and four pairs of legs. 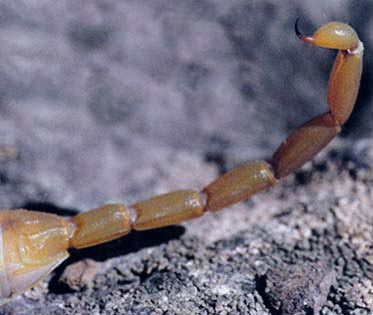 The stinger is called a telson. The bulb part of the telson, called the vesicle, contains a pair of glandular sacs that produce and store the components of the venom. The needle part of the telson is called the aculeus. It is similar to a hypodermic needle. Each venom sac is connected to the openings of the venom duct on the aculeus. The venom sacs are controlled voluntarily, so the scorpion can regulate how much venom is injected. 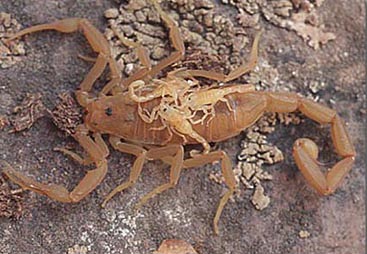 A scorpion can have as many as 100 babies in a single brood. They are born alive, not hatched from eggs like insects. When they are born, baby scorpions have a very soft outside shell, or exoskeleton. They crawl up onto their mother's back and ride there for 10 to 20 days until their exoskeleton gets stiff and hard. Then they crawl off and begin life on their own. 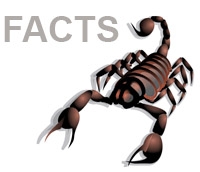