Lentic: a water system that does not flow, such as a lake.

Lotic: a water system with flowing water, such as a river.

Tributary: the area where a freshwater system such as a river or a stream meets a lake or another river.

Watershed: an area of land in which all the freshwater that enters (through rivers, rainfall, etc.) ends up in the same water system.

To Flow or Not to Flow 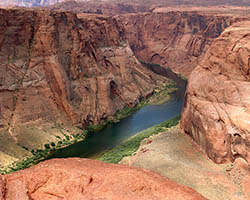 Water may flow in rivers or gather in lakes, depending on the landscape. Water can also affect the landscape, like in the carved canyons around the Colorado River. Image by Adrille.

Mountains and valleys, hills and basins. The structure of the land in an area has a lot to do with whether bodies of water are flowing (lotic) or stationary (lentic). Mountains or hills are steep, so they cause water to flow. Valleys and hills are deep and sometimes flat, causing stationary bodies of water. If we look inside each of these types of freshwater ecosystem, we will find that they are very different from one another.

You might think that a large pool of water would be pretty similar whether you're at the top or the bottom of it. But a few major differences exist across this change in depth. Lakes are split into 3 distinct layers based on temperature. You can imagine each of these layers as being similar to the layers on a pizza. Pizza has the lower bread level, the sauce in the middle, and the cheese and other toppings on top.

Let's take a look at these layers in a lake, starting with the bread, or the bottom. In a lake, the deepest layer of water (the hypolimnion zone; hypo- means under and limn- means lake) is usually the darkest and the coldest. Very little light reaches the bottom of deep lakes, so plants cannot even perform photosynthesis. Because of the lack of light, this is also called the aphotic zone. However, this layer does hold something very important: nutrients. Dust, debris, and anything that dies in the lake eventually sinks down to the bottom. This makes the lower level very rich in nutrients like iron and phosphorus. 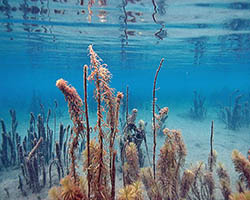 In a shallow area of Vad Lake, plants grow on the floor of the lake where they can still receive sunlight. Image by Mikhail Vedyokhin.

Now to the middle, saucy layer of the lake. The metalimnion zone (meta- means among) is warmer and gets more light than the lower layer. In fact, this layer is sort of a transition zone between the dark, cold bottom of the lake and the light, warm top layer. Here, the temperature changes the quickest as depth changes.

The top layer of the lake (the epilimnion zone; epi- means over) really is like the layer of toppings on supreme pizzas. Near the top of the lake, lots of light provides energy and warmth to this layer, which provides the right environment for a wide variety of creatures (toppings). With all the available light, this layer of the lake is also called the photic zone.

There is one time of year when these layers get a bit mixed up. In areas with cold winters, the tops of many lakes will freeze when the air temperature is low enough. Freezing happens at the top layer because it is closest to the cold air and because ice floats. Shortly before or after a lake freezes over, the temperatures of remaining water evens out a bit and the water and nutrients from the bottom of the lake will mix with the other layers. 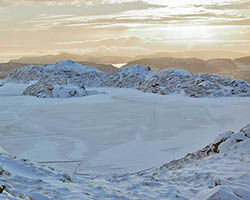 Lake layers mix it up a bit when lakes freeze over. Click for more detail.

When mixing occurs, nutrients spread throughout the water, a very important process for some of the tiny plankton that live in the upper layer of the lake. Mixing is especially important for the photosynthetic microorganisms at the top of the lake, because they are an important source of food for the entire lake's food web. Often during the cold of winter, animals in the lake (like turtles and some fish) will move away from the frozen upper layer and spend time resting in the lower layer of the lake.

There's another way to split up the regions in a lake, and this is often also used when talking about the ocean. Near the shore, where water is shallow, is called the littoral zone. Here, the nutrients that are found near the ground under the lake reach up into waters that have a lot of light. This provides a great place for plants and animals to live if they don't mind the movement of the water in small waves near the shore.

The middle area of the lake is known as the pelagic zone. The pelagic zone is much deeper than the littoral zone and most of it is usually low in nutrients. Additionally, most plants found near the top of the pelagic zone must be free-floating due to the distance between the water's surface and the bottom of the lake. 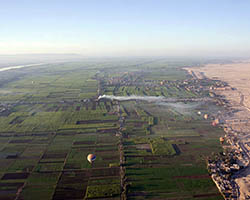 The Nile River is one of the most famous rivers in history, shown here within the Nile Valley. Click for more detail.

Unlike ponds and lakes, rivers and streams have flowing water. Since water is constantly flowing and mixing in rivers, layers do not form within specific sections of the river. Streams and smaller rivers, called tributaries, feed into larger rivers. This causes the amount of water in the river to increase. The water in rivers flows down from higher elevations to lower elevations, where it will eventually reach either a lake or an estuary (where a river meets the ocean).

Recent work is showing that streams may show some patterns though. Different streams in areas with similar temperature and rainfall patterns may show specific characteristics based on the conditions in the surrounding landscape.

Streams and rivers can also create unique structures such as canyons in their surrounding landscape. These structures are created by rivers slowly washing away the surrounding soils, causing the river to become deeper as soil is moved downstream. Rivers can also form meanders – an S-shaped curving back and forth of the flow of water through the landscape. This meandering works on a positive feedback system. This means that once a river starts to curve, that curve actually causes the river to curve more (the curve increases in size). 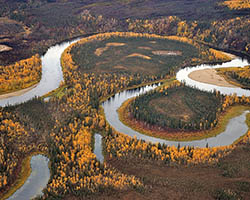 A large bend in a river can sometimes separate and form an oxbow lake. Click to enlarge.

Positive feedback occurs here because once a curve develops, the soil that erodes from the outer portion of the curve is often deposited on the inner curve. As the water flows through a deeper and deeper curve, even more sediment gets pulled away from the outer curve and deposited into the inner curve. As these curves continue to grow, they can eventually get to the point where they join together and cause an oxbow lake to form.

Wetlands are typically covered in vegetation and contain very shallow and stationary freshwater. Some wetlands will even completely dry out for parts of the year. The 3 main kinds of wetlands are bogs, marshes, and swamps. A wetland is called a bog, marsh, or swamp depending on the kind of vegetation that is present. Bogs have lots of mosses and peat. Peat is a large quantity of decaying plant material that is matted together almost like a birds nest. Marshes contain primarily soft, annual plants such as cattails and sawgrass. Swamps are forested wetlands, meaning they have lots of trees. There is also another type of wetland called a fen. Fens are very similar to bogs, but have water with higher levels of nutrients.

Wetlands are perhaps the most environmentally threatened ecosystem on earth and suffer from issues such as pollution, climate change, and habitat destruction. Destruction is especially problematic given that wetlands provide many important services to people and our planet.

Not only do wetlands house a wide variety of plant and animal life, but they play an important role in natural water purification, flood control, and protection from storms. Events such as Hurricane Katrina were made much worse by the destruction of the wetlands surrounding New Orleans. Large wetlands could have helped provide the city considerable protection and lessened the impact of the hurricane. 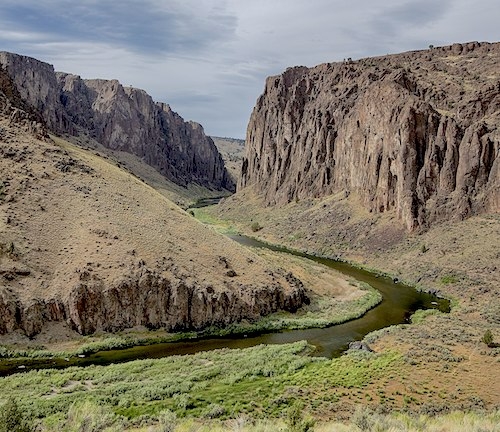 Rivers come in all shapes and sizes, like the winding Owyhee River of Oregon.