Exponential: to increase at a rate that continues to get faster as time goes on; these rates increase so quickly they require the rate to be multiplied by itself.

Moss: a flowerless plant that grows close to the ground and often resembles a fuzzy mat.

Temperate: an area that experiences fairly mild seasonal temperature variation (for example, a place that is warm in summer and snows in winter). 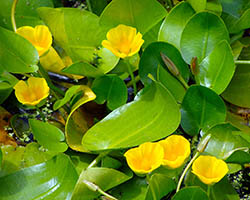 Plants aren't the only organisms that can capture energy from sunlight. Image by Renalle Ruana Pessoa Ramos.

When you think about photosynthesis, or organisms that can take energy from the sun and make it into food, you probably think about plants. Plants are the most commonly recognized producers. However, phytoplankton and bacteria can also be producers. 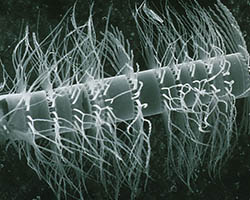 Image of a diatom created with an electron microscope. Click for more detail.

But what exactly is phytoplankton or algae? The term algae stands for many different types of producers that include bacteria, green algae (an evolutionary ancestor of plants), and diatoms (single-celled organisms that can either live individually or as part of a colony). Some diatoms are free floating (like phytoplankton), where they move through the water with very little control over their movements, but some male diatoms also have a flagellum, a whip-like tail, which they can use to move around. Additionally, many unattached planktonic algae also have a flagellum to help move around water. 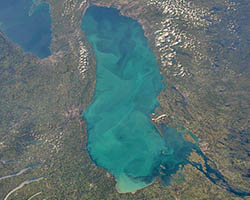 A massive plankton bloom in Lake Ontario, one of the five Great Lakes. Click for more detail.

Human activities, such as pollution, can result in a plankton bloom. These plankton blooms occur when cyanobacteria or blue-green algae grow at exponential rates, causing all the oxygen to be sucked from the water. This results in a "dead zone" where animals cannot live.

The loss of oxygen in these dead zones can occur even though blue-green algae produce oxygen, because of the huge amounts of blue-green algae that exist within these blooms. When these algae die, oxygen is used to break down and decompose their bodies. This breakdown of the dead algae is what sucks all of the oxygen out of the system.

Many lakes and rivers have plants that are attached to the ground beneath the water and grow to either near or past the surface of the water. 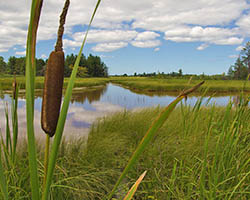 Many rivers and lakes have marshes along the edges. Image by Seney National History Association.

In temperate marshes, lakes, and stream edges you can see attached plants such as reeds, watercress, and bulrushes.

In tropical marshes, rivers, and lake edges you can see different attached plants such as reeds and water lilies.

Estuaries are where fresh and salt water meet. These habitats can contain various grasses such as eel grass and widgeon grass.

In deep regions of lakes, you can find willow moss and various kinds of worts, such as quillwort and stonewort. Ponds and slower streams can support water lilies, pond weeds, coontails, and milfoil. 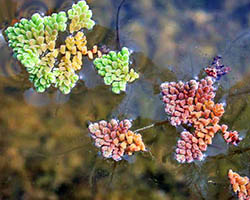 Some plants float on top of the water. Click for more detail.

Additionally, some plants are not actually attached to the ground at all. Instead they just float on the surface of water and have roots that dangle freely in the open water.

Decomposers – Taking Out the Waste

Microbes and fungi all help break down the dead plant and animal life that falls to the floor of rivers and lakes. By eating dead plants and animals, decomposers are breaking this dead matter back down into its most basic nutrients. Phytoplankton can then take in these nutrients and use them to grow and restart the circle of life. 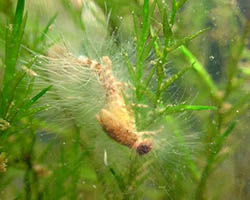 Water mold is a microorganism that breaks down dead materials. Image by TheAlphaWolf.

Bacteria are tiny single-celled organisms that can exist in very large numbers in the soil, and to a lesser amount in the water, of freshwater systems. Bacteria are one of the main types of organisms responsible for breaking down dead matter in freshwater systems. However, if bacteria reproduce to higher than normal levels, it can result in a health hazard for both humans and animals that are exposed to the water.

Fungi also take part in breaking down dead matter. You can find various types of fungi such as water molds, mildews, and yeast in freshwater systems. And despite fungus’s appearance and people’s initial beliefs about fungi, fungi are now actually thought to be more closely related to animals than plants.

Jason Borchert. (2015, April 05). Producers and Decomposers of Freshwater. ASU - Ask A Biologist. Retrieved May 16, 2022 from https://askabiologist.asu.edu/producers-and-decomposers-freshwater 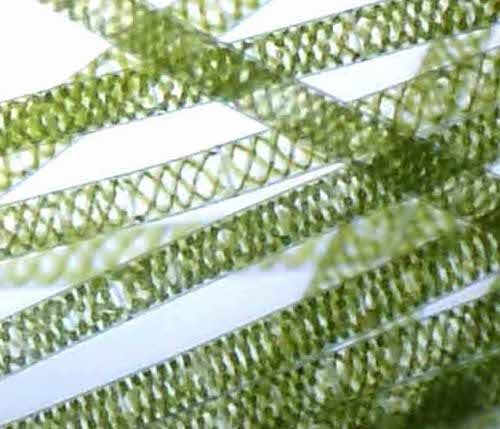 Green algae is also found in freshwater, where it performs photosynthesis.