Alpha predator: a predator that has no natural predators of its own as an adult, placing it at the top of the food chain.

Marsh: a freshwater habitat with shallow water that is interspersed with plants; marshes are closely associated with plants such as grasses and reeds.

Olfaction: a way of sensing the environment using chemicals. In humans, olfaction is the sense of smell. 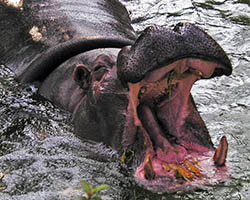 Hippos look intimidating, but not to the barbel fish. Click for more detail.

Under the surface of a lake in Africa, a fish swims inside of the big and toothy mouth of a large, water bound mammal – the hippo. This fish appears to be risking death, yet this hippo doesn’t seem to care. Why would this hippo not eat the fish or at least scare it away?

Hippos have a special mutualistic relationship with the barbel fish. This means these interactions are beneficial for both animals. In this case, the fish scrapes its mouth along the hippo's skin and even inside the hippo's mouth to get food. The fish removes parasites, food bits, and even small animals from the hippo's mouth, keeping it clean and healthy.

Though not usually through mutualisms, many of the animals in freshwater ecosystems are connected. The food chain starts with a producer, like microscopic phytoplankton. Phytoplankton can be thought of as very small, plant-like organisms that produce their own energy using sunlight. 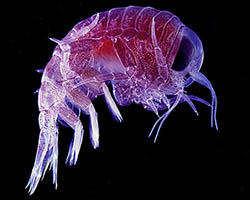 Then another organism, such as the animal-like zooplankton, eats the producer and obtains some of its energy. In many ways, zooplankton are like the phytoplankton of animals.

Zooplankton is then eaten by a larger animal and some of the energy is once again transferred to the new animal. This cycle continues until you eventually get to a large alpha predator, like a pink river dolphin, that typically does not have any predators as an adult. However, when they die, even the energy from these alpha predators will be harvested by decomposers and scavengers, such as bacteria, fungi, and crayfish.

Aquatic insects and filter-feeding fish are often the next step after zooplankton in the freshwater food chain. Mayflies, stoneflies, and aquatic beetles eat lots of plants in the water while giant water bugs can even catch small fish. Often when hatching season comes around, the adult forms of these insects are emerging in large numbers. When this happens, a feeding frenzy will occur as fish attempt to take advantage of all these available insect snacks. 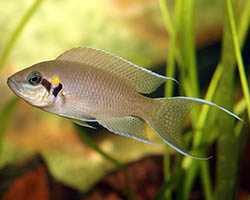 The animal most often associated with the freshwater habitat is the fish. Some of the more well-known fish are trout, bass, and bluegill. Most of these fish spend their entire lives in the same lake or river. But some are travelers, like salmon, a fish that spends its time in both freshwater and marine environments.

Large alpha predators, such as crocodiles and anacondas, sit at the top of many freshwater food chains. These predators, at least in their adult form, do not usually have to worry about other predators trying to eat them (with the possible exception of humans). These animals are the final step of the predator-prey relationship and the energy they consume won’t be harvested by other animals until they die. Then decomposers, like fungi, or scavengers, like flies and catfish, feed on them. 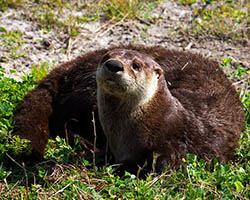 River otters are semi-aquatic, meaning they spend time in the water, but also on land. Image by U.S. Fish and Wildlife Service Southeast Region.

Lots of mammals like to hang out around freshwater as it is a valuable source of drinking water, food, and protection. Mammals such as hippos, otters, water buffalo, and muskrats all hang out in marshy areas and they are important to many of the other organisms that live there. Hippos eat grasses around lakes, keeping areas open and clear of vegetation. Hippos’ poop then serves as a valuable source of nutrients for the lake.

Birds such as ducks, herrings, egrets, eagles, and hawks might swoop down and grab fish out of lakes. Other birds such as grebes dive under water to eat fish using their wings to swim through the water.

Freshwater systems also provide an important water source for many land-based animals. Animals visit these lakes and rivers to obtain drinking water and in some areas you can see many unique cross-species interactions at these watering holes.

Some amphibians and insects spend the early stages of their lives living in freshwater systems before becoming mostly land-based animals as adults.

The rummaging around by some larger visitors, such as elephants and water bison, can even play an important role in helping to maintain shallow areas and keeping vegetation down. 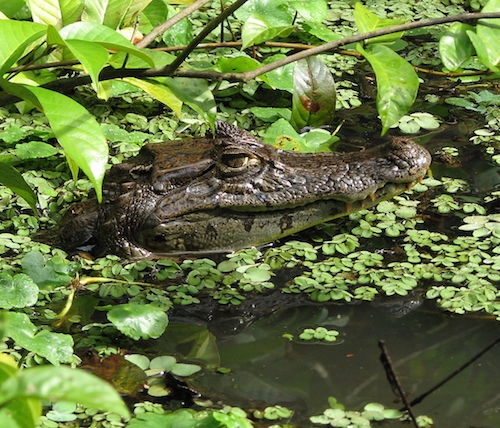 Some reptiles, like this caiman in Costa Rica, spend time both on land and in the water.