Derived: from a specific source (for example, derived savanna is caused by humans).

Edaphic: relating to the soil.

Flourish: to do well.

It’s All in the Season 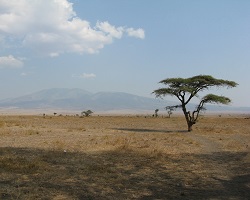 During the dry season, the grasses and other plants of the savanna begin to brown and die. Image by tommorphy.

If you traveled to the savanna in the wet summer season, you would have a very different experience than someone who had only visited in the dry winter season. The dry season typically begins with a series of violent thunderstorms that lead to strong dry winds.

These winds, combined with the dry weather, can often promote the quick spread of fires, which cause animals to flee the area. Plants begin to die or shrivel to protect from water loss through the long dry season. Rivers and lakes dry up. During this time, you would not see many plants or animals as it might not rain again until March.

However, when the rainy seasons begin again, a savanna looks very different. Many types of grasses flourish in the savannas and easily survive seasonal fires. 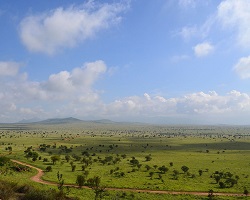 During the wet season, the grasses of the savanna are green rather than brown. Image by CT Cooper.

Because grasses grow so quickly and are so successful, there may only be one type in a given area. However, depending on the soil type, if you walk deeper into the savanna, you are likely to see many different types of grasses on your journey.

Rivers and lakes fill up again, and large trees, such as acacias, bloom. Animals return to graze on all of the plants that start to grow when the rains come.

You may wonder how an area is able to survive with such long dry periods. However, in order for the savannas to survive, they must have the long dry periods. If it rained all year, the savannas would become tropical forests, filled with trees and tall vegetation. For grasslands to survive, they need the dry periods that prevent trees from taking over. In many savannas a combination of seasonal fires and large numbers of grazing animals keep forests from growing up and taking over the habitat. 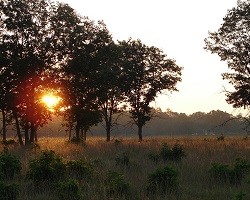 Savannas can be found in the American midwest, such as this oak savanna in Wisconsin. Image by US Fish and Wildlife Service.

All savannas are defined by the warm climate and dominance of grasses, but there are still different types of savannas. We mainly separate savannas into three types: climatic, edaphic, and derived.

Climatic savannas are defined strictly by the climate. Certain trees cannot survive because of the long dry seasons.

Edaphic savannas are defined more by the soil type. These savannas are typically smaller and can be found in any warm climate. The soil type is not deep enough or rich enough to support plants all year, such as on hills where the soils aren’t very deep.

There is one other type of savanna: one created by humans. These are known as derived savanna. Even a forested area can become a savanna if humans clear out all the trees and convert the land to grassland for their livestock. But this phenomenon may not be unique to humans. Parts of Africa have been converted to savanna because elephants have come through and eaten all the vegetation. 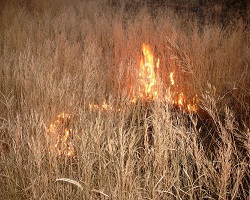 Seasonal fires are a part of life in the savanna. Image by Marco Schmidt.

Most birds and animals are lucky because they have legs or wings and can flee the fires. But some animals are drawn to the fires. Certain species of birds, such as the forked-tail drongos and Aplomado Falcons, flock to fires because all of the insects fleeing the fire provide them with a great meal. After a fire, all of the flame-roasted insects can also provide food.

Melinda Weaver. "Anatomy of the Savanna". ASU - Ask A Biologist. 26 May, 2014. https://askabiologist.asu.edu/anatomy-savanna 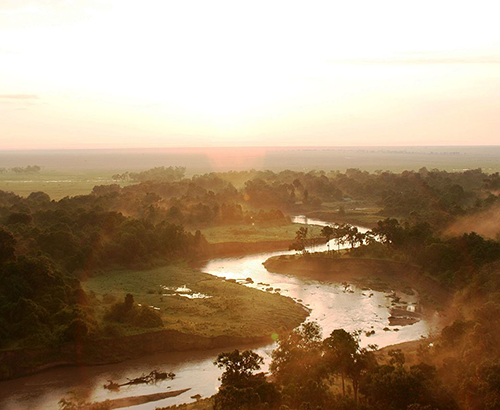 In Africa's Serengeti, water is a very valuable resource as the dry season approaches. Picture by Stefan Swanepoel.