Transitional: a state or characteristic of something that is changing. 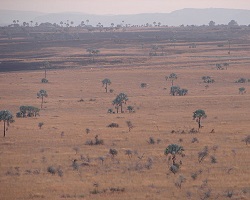 When you first enter a savanna, you may not even realize you've entered a new kind of habitat. You see patches of grass (some as tall as 10 feet), low-growing shrubs, and likely some trees that are widely spread out, but that’s about it.

In most types of savanna, you don't see lots of trees or other tall vegetation that dominates some biomes. And in the “winter” or dry season, when most of the plants die off or lose their leaves, you might not see much of anything at all. You would notice something distinct about the weather though. It’s pretty warm most of the year. In fact, savannas are defined more by their warm climates than by their vegetation.

Savannas are a transitional biome, not really a forest and not really a desert – just somewhere in between. This habitat is home to many different species of plants and animals around the world, and in Africa it is home to the largest land mammal in the world – the African elephant. If you have ever watched a television program about African wildlife, you are probably more familiar with the savanna than you know. More than 40 species of hoofed mammals and their big cat predators are at home in the African savanna. 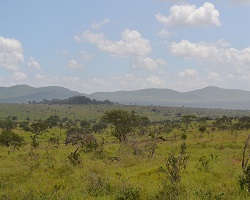 In the wet season, the grasses of the savanna are thick and green. Image by CT Cooper.

If savannas are just a transition from desert to forest, how do you figure out exactly what makes the habitat unique? Well, unlike grasslands, which are very similar, savannas are found in tropical climates and are defined by the seasons. They don’t have the traditional summer and winter seasons that we are familiar with in the United States. In the savanna, seasons are defined by how much rain falls. Because of this, they only have two seasons instead of four: wet and dry.

No matter what time of year you visit the savanna, you will want to bring shorts and a T-shirt because it rarely falls below 60° F (15°C), even during the season defined as “winter” in the northern hemisphere. Most of the year, it can get up between 80 and 100°F (27 to 37°C) – not the kind of winter weather most of us experience. This is the dry season. Savannas typically get very little rain – about 4 inches (100 mm) of rain – in the dry season, and they will often not get any rainfall at all for many months. This is a long time for plants to go without water, which is why you don’t see many trees.

However, the wet season gets lots of rain. The rain falls so fast and heavily at times that it is called the “monsoon season.” During this period, which lasts about six months, a savanna can get anywhere from 20-50 inches (500 - 1200  mm) of rain. This allows the grasses to grow thick and lush, creating a habitat where many different animals and birds can live.

Savannas are found on all continents except Antarctica. Click for more detail.

If you wanted to visit a savanna, where would you go? Because of their warm climate requirements, savannas tend to be found closer to the equator, which marks the halfway point between the north and south hemispheres of the earth. Because this area gets direct sunlight more of the year than the north and south extremes, the temperature doesn’t change much.

The most famous savannas are those of Africa because they are full of wildlife that people want to learn about, like lions and elephants. Nearly half of Africa is covered with savannas. But savannas can also be found in South America, Asia and even Australia. However, the diversity of plants and animals are not quite as high in other regions as in the African savannas.

Surviving in the Savanna 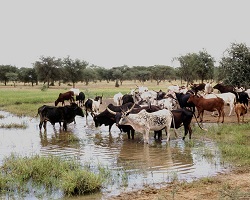 In many areas, cattle are allowed to graze in the savanna. Image by Marco Schmidt.

Because there isn’t always rainfall, the savannas have many fires and seasonal droughts. Thus, animals and plants must be able to adapt to the long dry seasons. Animals can do this by migrating, but plants must have other adaptations that allow them to survive long periods without water and the threat of fire, such as water storage organs and long roots.

In addition, many farmers bring their animals, such as cows and goats, to the savannas to graze on the plants. This can lead to over-grazing. With less vegetation, savannas can easily become deserts, creating new challenges for the plants and animals living there.

Melinda Weaver earned her PhD in animal behavior at Arizona State University. She is an urban ecologist, biology professor, and science writer. 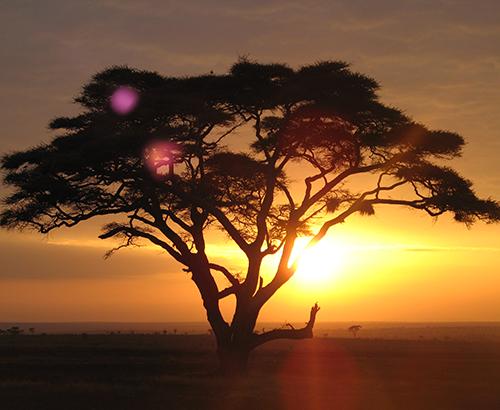 The Serengeti of Africa is one of the most well-known savannas.