Compete: to try to win.

Deplete: to use up a resource. 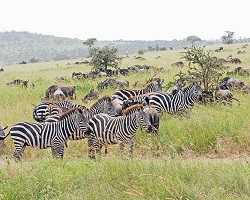 Savannas are home to a wide diversity of animals. The largest land mammal can be found there. So can the most deadly snake (the black mamba). The savanna is most popular to herbivores, which can dine on the diverse grasses found there during the wet season. There are more than 40 species of hoofed mammals living in the savannas.

How do they do this without reducing the plant supply? Well, each different mammal has its own preference for grass, allowing up to 16 different species of grazers to live together at one time.

Just like you prefer different foods than your friends, grazers, like antelopes, zebras and buffalo, eat different grasses and trees. This can be caused by the height of the plant (what other animal can reach the tops of the trees like a giraffe?), but it can also be caused by the plants themselves. Some plants produce chemicals that make them taste bad to some animals but not others. This allows the animals to live in harmony without depleting their food supply. 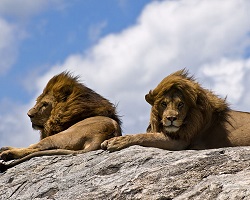 These young male lions are taking a break on a rocky outcropping in the Serengeti. Click to enlarge.

Because there are so many plant eaters, there are also lots of predators. Lions, cheetahs and leopards can all be found co-existing in African savannas.

You can also find jackals, hyenas and predatory birds. While they do compete for food, some of them survive the same way the grazers do – preying on different types of food. For example, the type of grazers a pride of lions can bring down is very different than what a lone cheetah might try to hunt. 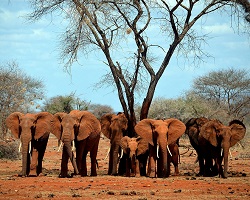 Many large mammals of the African savanna, like these elephants, migrate to move with available water. Click to enlarge.

What do the animals do when the drought hits and they can no longer find food? Well, they have to keep moving. Many animals of the savanna migrate throughout the year, searching for food and water. Many of the droughts are seasonal and hit one area before another, so animals are constantly following the rains.

In order to do this, animals must have long, strong legs or wings that allow them to move – and move quickly – when the need arises. Some animals do this with size, such as the elephant or buffalo. Some do it with speed, such as the gazelle and antelope.

These adaptations come in handy in other ways as well. Having long, strong legs allows them to quickly flee fires and predators or to fight off predators with strong kicks of their hind legs. 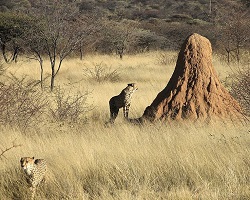 While most tourists are attracted to the wildlife above the ground in a savanna, there is also a rich diversity of insects living below the ground – and contributing to a unique landscape. While insects such as grasshoppers and beetles can live above land and feast on the vegetation, many insects take advantage of the quality of the dirt.

Savannas often have large, open patches of dirt. In these soils, you can often find insects such as ants and termites. In fact, there are more species of termites in African savannas than anywhere else in the world – more than 1,000 different kinds! Termites live socially in big colonies, and many build large mounds that can be several yards (meters) high, standing out against the short shrubs and grasses. 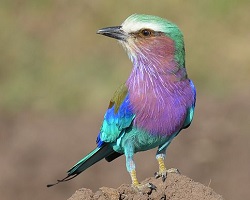 Birds and other small animals hide from the heat of the day by finding burrows or other places to get out of the sun. Lilac-breasted roller bird (Coracias caudatus) by Adam John Bourke.

Animals of the savanna must also be able to survive the heat because it never gets much cooler than 60 degrees F (15 C) but can often get up into the 90s F (32 C). Many animals do this by building holes in the ground, called burrows, where they can rest during the heat of the day, or provide shelter for their young. Other animals adapt by having large patches of skin where heat can escape, such as the large, thin ears of elephants.

But some animals take advantage of the heat. There are many species of birds in savannas, including large birds of prey such as hawks and buzzards. Because hot air pushes upward, the birds can soar on the air without using much energy. They can spend all day soaring over the large areas of land, making it easy to spot prey.

Melinda Weaver. "Animals of the Savanna". ASU - Ask A Biologist. 27 May, 2014. https://askabiologist.asu.edu/animals-savanna 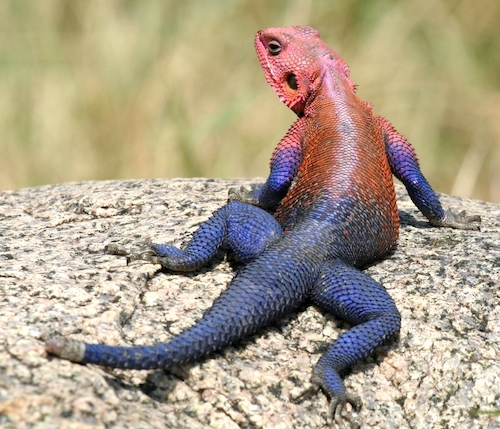 Some reptiles live in or near the savanna, like this male lizard, a Mwanza flat-headed rock agama.