Grass Patches... and a Few Trees 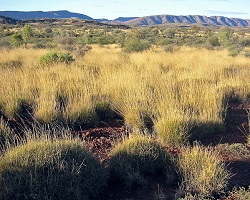 Grasses of the savanna often grow in thick clumps, with bare ground in between, like these in central Australia. Image by Thomas Schoch.

The savanna is characterized by its variety of grasses. However, it is not the lush grasses of grasslands that extend as far as the eye can see. Instead, the grasses are often in thick clumps with bare ground and shrubs in between.

There are many types of grasses in the savanna, such as Rhodes grass, red oats grass and lemon grass. The Bermuda grass that many plant in their lawns is native to the African savanna as is elephant grass, which can grow 10 feet (3 m) tall. Because the rainfall only lasts about half the year, it is difficult for trees to grow in savannas, but it’s not impossible.

The umbrella-shaped acacia tree, which grows tall and flowers at the top where only giraffes can reach, is seen throughout the savanna. The baobab tree also grows there, growing as high as 25 feet and living for up to 1,000 years.

Plants need rain to survive. So what happens when it doesn’t rain at all for six months? Well, plants in the savanna have developed defenses for this. Many plants have roots that grow deep in the ground, where the most water can be found. This defense also allows the plant to survive fires because the root is undamaged and can regrow after the fire. 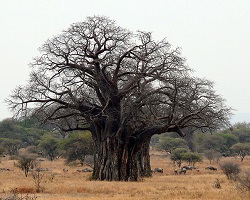 Many plants, like this baobab tree, have adaptations that help them survive the dry season. Click for more detail.

Grasses are built to survive droughts because they can go dormant during dry periods and then grow rapidly once the rains come. Many plants flower only part of the year to preserve water.

Some plants, such as trees, must develop other strategies to cope with the prolonged droughts. Many plants grow organs that store water, such as bulbs or corms (a swollen stem that is found underground, much like a bulb). The baobab trees are able to store water between the bark and meat of the tree that they can sip on during the drought. They also have a thick, corky bark that resists fire and prevents water from evaporating. 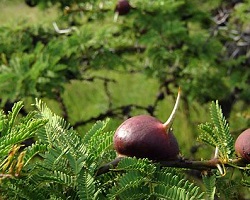 Acacia trees often come with thorns to protect them from being eaten by large herbivores. Click for more detail.

There are more than 40 different hooved mammals that eat plants living in savannas, so plants must develop defenses that allow them to survive to the next season. Some develop a thick covering or spines that might deter grazers. Others contain chemicals that cause their leaves to taste bad.

When grazed upon, the acacia tree sends a bad taste to its leaves so that grazers only get a few mouthfuls before the leaves start tasting terrible. It then produces a signal to let other trees in the area know that grazers are on their way.

However, the acacia tree has an even more powerful defense. It is guarded by four species of aggressive ants. These species live in the tree and protect them from grazers by running out in large groups and stinging any grazer that dares come near. With a defense like that, the tree has little to fear.

Connections in the Savanna 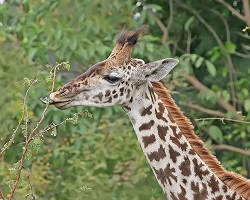 Grazers often must deal with plant defenses. This giraffe uses its flexible tongue to pick around thorns, and the ants living on the acacias don't seem to bother adult giraffes. Image by Muhammad Mahdi Karim.

This specializing makes every grass and every grazer very important to a community of animals. If one grass goes extinct because of the climate or human influences, the grazer might have nothing to eat and could die out. Then, the predator that feeds on that particular grazer would also have less food, affecting an entire community. Thus, every plant and animal in the savanna is important for the savanna to survive.

Melinda Weaver. "Plants of the Savanna". ASU - Ask A Biologist. 27 May, 2014. https://askabiologist.asu.edu/plants-savanna 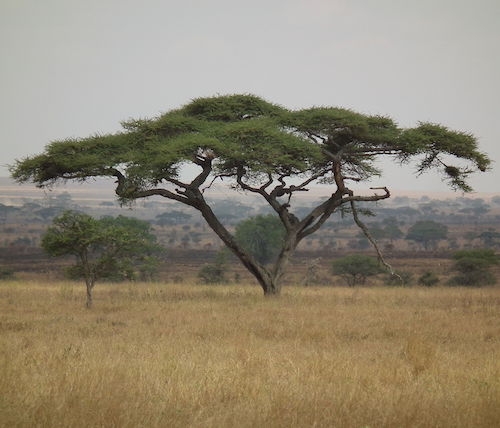 The umbrella thorn acacia is one of the most recognizable trees of the savanna.