Deciduous: trees that usually lose their leaves every year.

Shrub: a plant that is smaller than a tree and grows close to the ground.

Anatomy of the Taiga 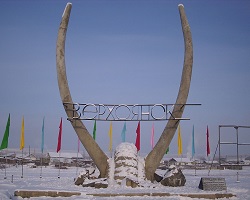 Verkhoyansk is tied in the running for the location where the lowest temperature in the northern hemisphere has been recorded. This image shows the entryway to the town. Image by Becker0804.

On the eastern end of the Russian taiga, a small town named Verkhoyansk stands along the Yana River. If you were to live here, you would become close friends with winter. Temperatures do not rise above freezing between the dark months of November and March and nights can stretch for 21 hours. When summer does spring back into your life, its visit is brief.

During the long summer days, the sun shines brightly through the sparse, coniferous canopy for 20 or more hours daily but remains close to the horizon. Patches of the ground which are finally free of snow support lichen beds, and stubby coniferous trees dot the landscape. In this town, you must soak up the warmth and humidity of summer as much as you can because, before you know it, winter will come swooping back.

Exceptions to the Extremes

Verkhoyansk exemplifies the northern extreme of the taiga, the world's largest land biome. The boreal forest stretches across Alaska and Canada, across northern Europe, through northern Russia, and even touches upon northern Japan. 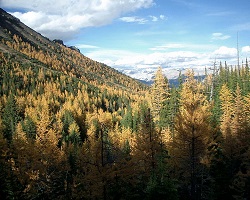 Forests similar to the taiga can also be found at high elevations. Click for more detail.

The largest continuous taiga exists in Russia, where it spans for 5,800 kilometers (3,600 miles) between the Pacific Ocean and the Ural mountains. In some mountainous regions, such as the Himalayas, the taiga can also be found at high elevations.

Although a long, bitter winter and a short, humid summer characterizes the taiga, not all regions of the boreal forest are as brutal as Verkhoyansk. As you move from farther south, the annual temperatures rise from a chilly -5˚C (23˚F) to a toasty 5˚C (41˚F) and the summers can last for as long as 3 to 4 months.

The relatively warmer weather supports a denser population of coniferous trees and even some deciduous trees. The leafy canopy, therefore, grows thicker as you move south in the taiga and sunlight has a harder and harder time reaching the forest floor. Shrubs, such as blueberry and cloudberry bushes, short grasses, young trees, ferns, and wildflowers dominate rare patches of sunlight in the forest. 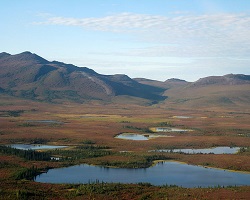 In some areas of the taiga, puddles and ponds form where permafrost keeps water from seeping into the soil. Image by 16Terezka.

In the regions of the taiga where the average annual temperatures stay below the freezing point, a frozen layer of soil lays just beneath the surface. This layer, when continuously frozen for longer than two years, is called permafrost. In the north, a continuous permafrost layer prevents nutrients, surface water, and even roots from reaching deep down into the earth.

In regions of the taiga where the average annual temperatures rise above the freezing point, exposure to direct sunlight may melt the frozen soil during summer. These areas break up the permafrost layer and therefore, the southern taiga often has discontinuous permafrost. Freshly melted soil feels moist and spongy, and it often creates the perfect environment for bogs.

The Blue Shadows of Glaciers

Up to about 12,000 years ago, when global temperatures dropped to chilling levels for a long period of time, glaciers covered the taiga and cut deep into the ground. As the earth warmed up, the glaciers retreated and their impressions filled with water to create lakes. In the taiga, lakes are one of the few resources in which water exists in liquid form. 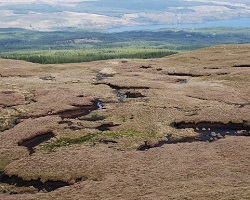 Here we see a bog with peat—a build up of dead plant material. This makes the water acidic and keeps many plants from growing. Image by Patrick Mackie.

In some areas of the taiga, water from melted snow or permafrost accumulates at the surface. Due to the decaying conifer needles and low temperatures, this water is usually acidic and lacking in nutrients—the perfect ingredients for creating spongy, moist bogs.

Bogs are homes to mosses, short grasses, and deciduous trees. In the summer, insect populations swell and migrating birds flock around bogs. Dead plant material accumulate in these spongy regions and color the water brown. You may be familiar with tannins, one of the plant compounds that decomposes into the bog water. Tannins are also found in tea. 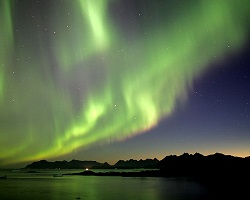 In some areas of the northern taiga, such in Norway or in northern Canada, you may witness eerie green lights flickering high above you in the night. This brilliant show is part of the aurora borealis, or northern lights, and originates way up in space.

Collisions between solar wind and particles that are affected by the Earth’s magnetic field release light which paints fiery green patterns across the taiga sky. If the aurora is especially intense and there is no other noise in the area, you may even hear a faint clapping sound from high above. 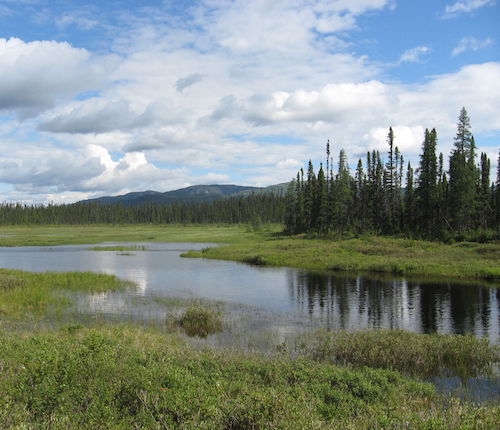 The taiga, or boreal forest, is often broken up by small bodies of water.