Plants of the Taiga 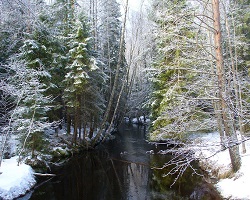 Unless plants are close to a stream or pond in the taiga, water can be hard to find. Image by Евгений Адаев.

Do not let the thick forests that cover this biome fool you: it is not easy growing here. In many areas, plants must live off a shallow layer of soil that holds low levels of nutrients because their roots cannot penetrate past the permafrost. In addition, most of the water in the taiga exists as snow, which roots cannot absorb. During the winter, plants must resist the whipping northern winds and heavy snowfalls. Young plants have an even tougher time. Despite long daylight hours during the warmer months, sunlight can barely reach through the thick, coniferous canopy to the forest floor.

So then, with all these obstacles, how can boreal forests even exist? 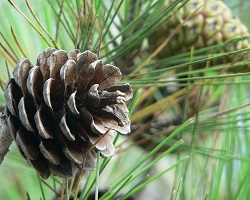 Trees in the taiga are mostly conifers, with evergreen needles that are modified leaves, and pine cones that carry nutritious seeds. Image by Magnus Rosendahl.

Conifers thrive in the taiga. You're probably familiar with coniferous trees as pine trees or evergreens. Generally, they are shaped like cones. This curious characteristic lets heavy snowfall easily slide off the trees and protects their branches from breaking.

The thin, dark green needles growing out of the branches are the leaves of the coniferous tree. Unlike deciduous trees, coniferous trees keep their spiny leaves all year round. Wax coats each needle to protect the leaves against water loss and the harsh taiga wind. The shape and color of the leaves maximize light absorption from the sun, which helps to maintain a high rate of photosynthesis.

Conifer trees, along with most other plants, make their own food using photosynthesis. A high photosynthetic rate gives conifers extra energy. This is the edge they need to survive in a difficult environment like the taiga. When the spiny leaves do fall to the ground, their decomposition releases acid into the soil and makes the soil acidic. 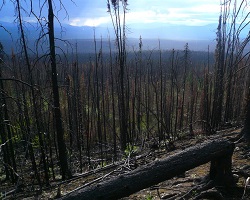 Fires are important to clear the canopy of the taiga. Image by Robinsoncrusoe.

Conifers also provide food for animals in the taiga. They produce pine cones, which are loaded up with nutritious seeds. The cones open when the seeds are mature, but hungry birds and mammals can force the scales of pine cones open to get the seeds. The Red Crossbill even has a crossed bill that specifically pries open pine cones to get to the seeds. To avoid having all their seeds eaten, conifers produce two seeds per scale. That way, when an animal opens a scale, one seed falls to the forest floor while the other is eaten.

Wildfires are fairly common in the taiga. They are important for clearing canopy space so that sunlight can reach the ground. Freshly burnt patches under open spaces of canopy are home to new trees, shrubs, grasses, and wild flowers. Coniferous trees have thick, tough bark that protects them against wildfires. The cones of some conifers, like the jack pine, need to be burned in order to open. 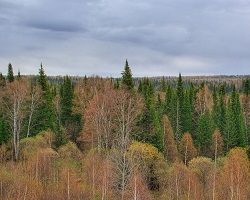 As you move south through the taiga, more and more deciduous trees can grow. Image by Игоревич.

The canopy takes on a flatter, broadleaf appearance the farther you move south in the taiga. As temperatures grow moderate enough to melt snow and speed up decomposition, water becomes more available as a liquid and the soil holds more nutrients. Under these rich conditions, deciduous trees can take root. Although they do not outnumber the amount of coniferous trees, deciduous trees like poplar, maple, elm, and oak trees are common in the southern taiga.

Various berry shrubs also live in the southern taiga and have important agricultural value. You can find an assortment of raspberries, bunchberries, cloudberries, and cranberries all in the taiga. Berries like lingonberries and bilberries can even grow in the north taiga. 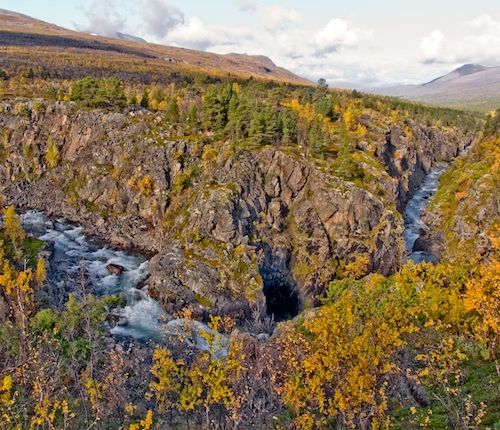 Living in the taiga can be quite a challenge. Even if water is available, thin or acidic soil can be a problem for plants.