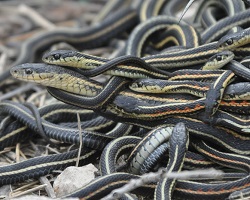 Huge numbers of garter snakes emerge from their overwintering dens in spring. Click for more detail.

Animals of the Boreal Forest

If you walk through the Canadian taiga in early April, you may encounter a bizarre phenomenon on the forest floor. At first, you may think that someone just left a pile of shiny, twisted dark ropes on the ground. Upon closer look, you realize that not only is this pile wriggling, but it composed of many slender heads and tails.

Congratulations! You have stumbled upon a knot of red-sided garter snakes. This phenomenon occurs when warming temperatures wake garter snakes from hibernation. Males first emerge from their dens and wait. Once a female slithers out, the males jump on her all while wrestling each other to try to mate with the female.

If you come back to the same spot in the middle of the winter, you will only find a blanket of snow on the ground. In fact, it may be difficult to find any wildlife in the taiga at all in the winter. A snowshoe hare may dart past you as it sprints from a pack of hungry wolves. At night, the hoot of a Great-gray owl may echo through the dark forest. In general, however, the winter of the taiga is quiet and lonely. 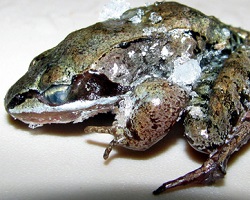 When overwintering, wood frogs not only drop their body temperatures, they also partially freeze. Click for more detail.

Most year-round residents of the taiga are inactive through the harshest winter months. A few of them sleep through most of it. Once the temperatures start dropping, these animals first eat as much as they can to store thick layers of body fat. Then, they look for dark, quiet places. Terrestrial (land) animals such as chipmunks and garter snakes will find burrows underground, and semi-aquatic animals like snapping turtles will burrow into the muddy bottom of ponds.

In certain mammals, their body temperatures will drop to help them save energy over the winter. Bears in the taiga also bulk up and sleep through the winter, but the body temperature of bears does not drop enough for their sleep to be considered true hibernation. When these year-round taiga residents are sleeping, they do not eat. Luckily, they have a lot of body fat to keep them from going hungry. The arrival of spring and warming temperatures stir these hibernating animals from their slumbers. It takes a lot of energy to wake up, though, and these animals burn through the last of their stored body fat to wake up and greet the sun. 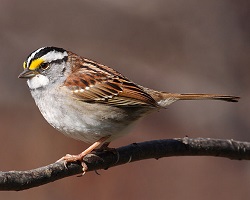 This white-throated sparrow migrates to the taiga for the summer insect blooms in bogs. Image by Cephas.

Some animals, especially certain birds, can't handle the year-round taiga experience. On one hand, these birds love the warm and moist taiga summer, especially with the blooming insect populations. On the other hand, they can't deal with the winter. To solve this problem, birds such as the Siberian Thrush and White-Throated Sparrow spend their winters in the south. They migrate north so that they arrive in the taiga bogs just in time for the warm weather and the swelling clouds of mosquitoes, dragonflies, and moths.

The swampy grounds erupt with the mating calls of these migratory birds when they pause from eating to seek partners. Before long, eggs begin hatching and baby birds start to demand for food. Bird parents stuff regurgitated insects and seeds into the mouths of their offspring so that their young can quickly grow before the short taiga summer ends. If something happens to the nest and baby birds, there is not time to start over again. Once temperatures begin to cool down, these migratory birds pack up and move back south.

Not all animals leave before the taiga winter. Some animals, like the Siberian tiger, the snowshoe hare, and the snow goose not only live in the taiga for the entire year, but also remain awake through the winter. 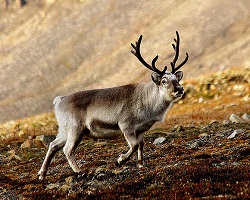 Though many animals avoid the freezing taiga winter, that is the only season barren-ground caribou can live in the taiga. It is too warm in the summer months, so they migrate to the colder tundra for the summer. Image by Per Harald Olsen.

To survive, these animals have special adaptations like large paws to maneuver through the snow and thick coats to protect against the bitter cold. Snowshoe hares lose their summer brown coat and grow one in winter white to help them blend into the winter landscape.

Fish that live in the lakes and ponds of the taiga have little choice over whether or not to spend the winter in the boreal forest. When temperatures drop below freezing, the surface of the lake freezes over. Luckily, because ice is lighter than water, ice remains on the surface. Fish like northern pike and Alaska blackfish live under the ice at near-freezing temperatures. 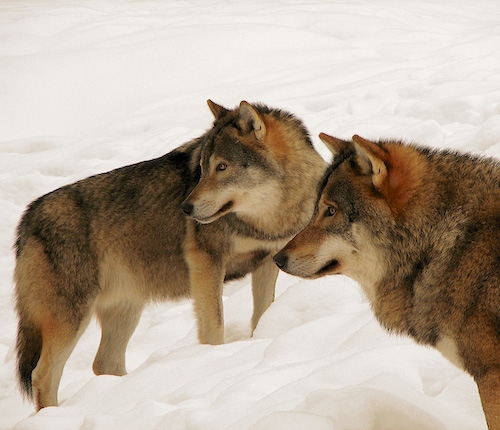 Many gray wolves live in the taiga, where they hunt caribou, deer, and smaller prey for food.