Bog: an area with spongy, wet ground that holds a lot of dead plant matter.

Decomposition: when dead plants, animals, or other living matter rot and break down into nutrients that can be used by other plants and living things. 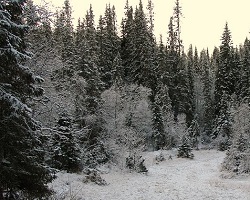 Much of the taiga is a dark, dense forest. Image by Orcaborealis.

A cold wind whips through a huge coniferous forest. In its wake, falling snow swirls and evergreen branches sway. Sunlight filters through the dark green canopy, but it is too weak to warm your hands. Snow slides down from the peaks of cone-shaped trees and clumps on the hard forest floor. All around you, the woods stretch, lovely, dark and deep. You are standing in the largest land biome in the world: the taiga.

In Russian, “taiga” translates to “forest.” This biome is also known as the snow forest or Boreal Forest, named after the Greek Goddess of the North wind. Coniferous trees dominate most of this biome, but occasional lakes and bogs punctuate the evergreen landscape. 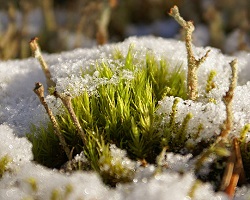 Moss and lichen can survive the harsh conditions of the taiga. Image by Randi Hausken.

It takes some serious stubbornness to survive the harsh winter of the taiga. For as long as 9 months, temperatures range between -54°C to -1°C (-65°F to 30°F) and snow falls furiously. Because the taiga is located so far north, the sun does not shine for very long during the winter. With such short days, the cold affects everything, even death. The cold temperatures slow down the rate of decomposition so much that nutrients from dying plants and animals take a long time to break down before they can return to the soil.

However, even under the harsh conditions of the long and dark taiga winter, life does find a way. Lichen, mosses, mushrooms, and conifer trees thrive on thin soil that lacks nutrients.

Animals that remain active through the winter sport thick coats to guard against the cold. Many animals eat whatever plants they can find, munching on the seeds of pine cones or green shoots buried beneath the snow. Some snack on other animals. For others that won't find enough food over the winter, hibernation is another option. Yet others leave the taiga and migrate south to warmer biomes for the winter. Eventually, the winter passes and gives way to warmer temperatures. 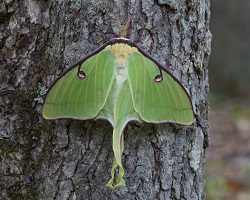 Life in the taiga can endure or be short-lived, like in the luna moth. Click for more detail.

As the days grow longer, the air warms up. Temperatures range between -7°C to 21°C (19°F to 70°F) in the summer. This may not sound very warm to you, but for those that live in the taiga, the summers are hot and humid enough to bring on the breeding season. Hibernating animals emerge from their burrows to seek mates. Insect populations bloom. Migratory birds arrive at bogs to find partners and start building nests. The taiga awakens with lots of activity because the summer is short – between one and three months – and the flowers and animals in the taiga must mate and produce their young before the winter returns. 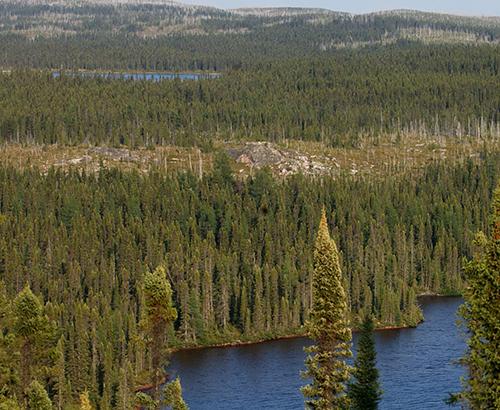 The taiga is also known as the boreal forest. In many areas, conifer trees are dense and the forest stretches for thousands of miles without end.