Regeneration: to make something new that was old, damaged, or used... more

When a large, roaring wildfire is headed for a town or village, many people have no choice but to leave their homes behind and escape to safety. But what do animals do? Their homes are the lands that are burning. What happens to them? 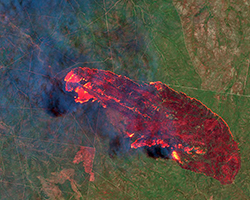 Any wildfire that burns a large area of land can be dangerous for many animals. Click for more detail.

Large wildfires can be dangerous even for the fastest animals. Sadly, the extreme Australian wildfires in 2020 were like this and more than 72,000 square miles burned. Scientists think that almost three billion animals were killed in this disaster, although this is only an estimate.

When animals are not used to fires, it is extra dangerous for them. Some places in the world don’t normally have fires. Without humans, there would be few fires in the Amazon rainforest, but in August of 2019 more than 1,000 new fires were started each day by farmers and ranchers who were trying to make more room for crops. Some of these fires would get beyond the control of the farmers and continue to spread into the rainforest. Biologists believe that millions of animals were killed because of these fires.

Escape from fire is possible

Wildfires happen naturally in many parts of the world, and the animals that live in these places have different ways to avoid the flames. Adult birds can easily fly away, and large mammals run from the fire. Sometimes big animals like elk or moose will even walk out into lakes and ponds to be safe. Insects, mice, lizards, and other animals may be lucky enough to find deep underground burrows where they will be protected. In fact, burrowing animals like the gopher tortoise will make holes where many different animals can hide together. Though smaller or slower animals may not escape, it is possible for many. However, reduced food resources are a new challenge even if they survive the blaze. 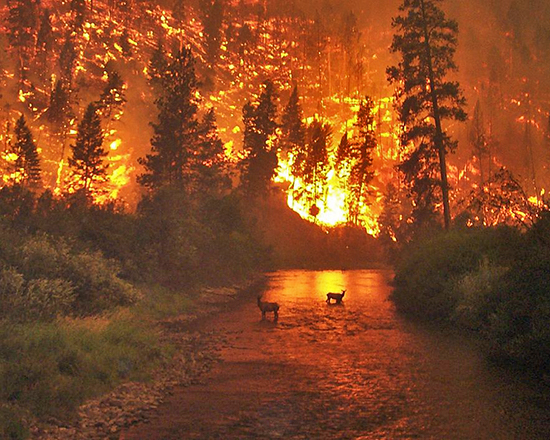 Two elk are standing in a river in Montana, as they flee from a wildfire. Image by John McColgan, Bureau of Land Management, Alaska Fire Service, via Wikimedia Commons.

Even though many animals may die because of natural fires, the fires are often part of a cycle of regeneration. New plants will grow after the fire, nutrients will spread out more across the landscape, and the burned wood can make new homes for animals. These burns can help the community of animals grow and stay healthy.

Animals that benefit from fire

While a burning forest is not fun for most animals, some animals thrive on wildfires! For example, there are a group of beetles called “fire chaser beetles.” Instead of running away from fires, they fly straight toward them. These beetles need burnt wood for their babies to eat, and they sometimes lay their eggs in logs that are still smoking. 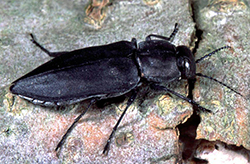 This fire chaser beetle is the species Melanophila acuminata. It will travel hundreds of kilometers in search of freshly-burnt wood to lay its eggs in. Image by AG Prof. Schmitz via Wikimedia Commons.

The adult beetles also have an incredible organ that allows them to sense the heat of wildfires from over 80 miles away. These organs almost look like small eyes underneath the beetles’ legs. They are so good at finding fire that in the 1940s, swarms of beetles would sometimes show up at California football stadiums. The beetles thought that the heat and smoke from the spectators’ cigarettes were wildfires.

Fire chaser beetles need burnt wood to raise their babies, but at least they don’t spread new fires. For thousands of years, Aboriginal people in Australia have known about “firehawks.” Wherever there is a wildfire in the Australian outback, you might find these birds: black kites, brown falcons, and whistling kites. These “firehawks” fly over the front lines of wildfires, waiting for the flames to scare lizards, mice, and insects out of their homes. The birds then swoop down, capture fleeing animals, and eat them. 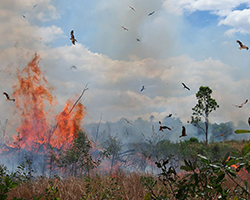 Brushfires in Australia are the perfect opportunity for easy prey if you are a firehawk. Click for more detail.

For many years Aboriginal peoples have been telling scientists that there is more to the story. Only recently have scientists started listening. These birds will even start their own wildfires to find more prey. The birds have been seen picking up burning sticks or embers and carrying the fire to a new spot. They drop the fire onto dry grass and wait for a new wildfire to start. Then it’s time for them to feast again.

Although many species need the habitat provided by helpful fires, wildfires will definitely claim the lives of some animals. Extra-large, fast-moving fires can be particularly dangerous. But if we start gentle, controlled burns in small patches of land, these areas won’t burn when the next fire comes through. This way, the animals will have areas to escape to safely.

Andrew Burchill. (2021, May 05). Animals and Wildfires. ASU - Ask A Biologist. Retrieved May 17, 2022 from https://askabiologist.asu.edu/animals-wildfires 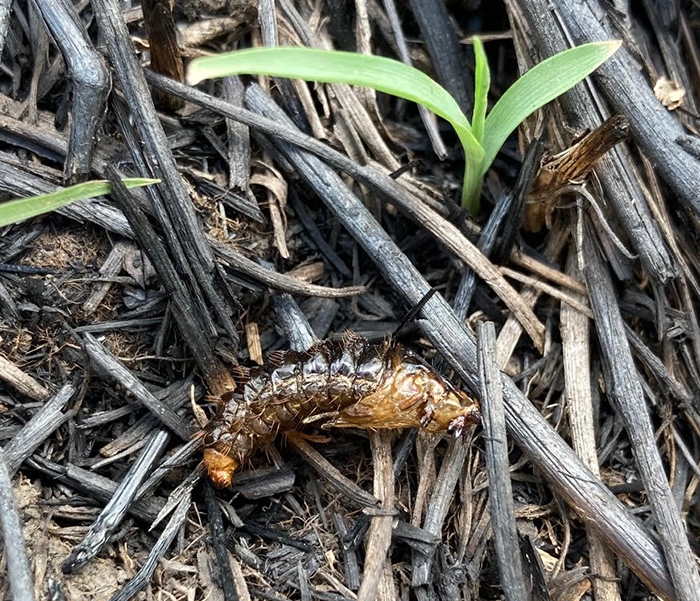 Some animals, like this insect larva, aren't able to move out of the way of a wildfire. Does this mean that wildfires are bad?