Ember: a hot coal, that can be from tiny to large. Embers can be created by fire and can start new fires...more 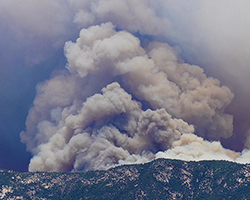 The "plume," or smoke cloud, made from the Bighorn Fire in Tucson, Arizona. Image by USFS via Wikimedia Commons.

June 17th, 2020 was a bright, sunny day in Tucson, Arizona… if you were looking south. But the firefighters on top of nearby Mount Lemmon were hard at work, and they had no time to pay attention to that clear, blue sky. Their eyes were focused on the ground as they desperately hacked away at the grass and brush surrounding their mountain-top fire station. If they ever lifted their heads, they would look at the sky in the north and the east. Over these hills, light and wispy clouds became gray and then became black. The front line of the gigantic Bighorn Wildfire was speeding their way, and it threatened to burn down the fire station itself.

These firefighters knew that no amount of water could possibly put out a 119,987-acre wildfire, but maybe they could keep the fire from consuming their home base. As the roaring flames climbed the hill, the exhausted firefighters had to evacuate the area. They had spent the day using chainsaws and shovels to clear away plants that could act as fuel. The bare earth left after clearing fire fuel is called a “fireline” or a “firebreak” and it is designed to keep the flames from spreading across it. Would the firebreak be enough to stop the approaching fire? 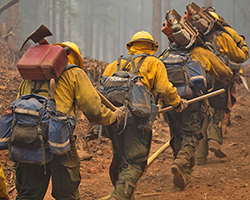 Fighting fires in remote areas is a very difficult and dangerous job. Without access to running water, fire crews must rely on hand tools and people-power. Helicopters will occasionally fly over with giant, hanging buckets of water or foam to drop on the fire, but this will only slow down the spread.

When the fires are near roads or towns, other firefighters can drive firetrucks to the scene. They use hoses to spray water and other chemicals to stop the wildfire. Sometimes there are tall buildings called fire towers that are used to spot fires early. Pilots can fly planes and search from above too. When wildfires are still small and found quickly, they are easier to put out.

All these things are parts of fire suppression, which is when we try to put bad fires out, stop them from spreading, and keep them from starting. 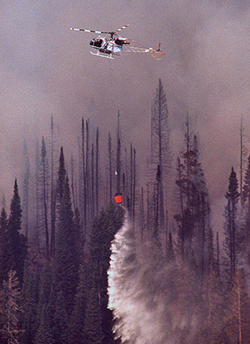 A helicopter bucket is used to drop hundreds of gallons of water on a forest. Compared to the size of the blaze, it may seem like using a squirt gun to put out a burning house. However, sometimes a bit of water at the right moment can help save lives. Image by Harlan Kredit via Wikimedia Commons.

However, sometimes when a fire is spotted, firefighters decide to let it continue to burn. If it is not near a community or any buildings, such fires can actually help protect against bigger, more dangerous fires. Sometimes firefighters will even carefully start a fire themselves; this is called a “controlled” or “prescribed” burn.

Controlled burns are watched very closely by firefighters with special training...  the controlled burn will help remove some of the dead logs and plants without hurting the forest. If this dry fuel were not burned, it would continue to build up. Then, the next time a fire accidentally started, the wildfire might be too big to control. In some ways, controlled burns are like annual flu-shots against fire: they let us switch bad, dangerous fires for smaller, helpful fires. These controlled burns mimic the pattern of fires that existed before countries like the USA tried stopping all wildland fires.

The reality of wildfire

But fire suppression is very expensive, and we can’t prevent all wildfires from becoming dangerous. In forests and grasslands outside of cities, wildfires are a fact of nature. Many people fear having fires nearby, even if these are the healthy, smaller fires. We need to accept their presence and plan for the occasional and inevitable fire. But what can people do? 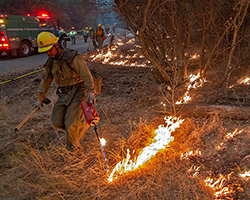 Controlled burns keep dry grass and shrubs at a minimum. Here, a fire crew member uses a drip torch to carefully light brush by the side of the road in the Sierra National Forest in the USA. Image by the PSFS, USDA, via Wikimedia Commons.

We need to take actions to help protect our homes and families. For example, hot embers carried by the wind are the mostly likely reason that a rural home catches on fire. If you can keep trees, fuel, or other buildings further away from your home, this will help protect it. Also, houses in fire-prone areas should be built with fire-resistant materials. Wooden roofs and decks are especially dangerous. Making buildings safer is called “fire hardening.”

Some landowners in the Western United States will do their own yearly controlled burns, very cautiously and with proper safety measures in place. They know that the fires can return nutrients to the soil and keep their homes safe. When areas are especially dry, campers and hikers are warned not to start cooking fires, launch fireworks, or light cigarettes. Unexpected fires in the wrong place can be dangerous for everyone. However, individual actions are not enough.

What should governments do?

In areas with frequent wildfires, communities, towns, states, and the government must come together to manage fires safely. Towns and communities can pass laws requiring that new homes be built “fire hardened” and they can spend money to help upgrade existing homes. Schools need to teach students about the dangers and importance of fires. Volunteer fire crews can help citizens learn to safely use controlled burns on their own properties, if in a rural area. 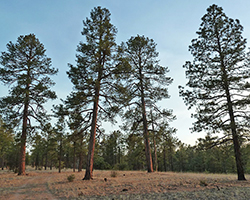 This may not be how you imagine a forest, but this is a healthy ponderosa pine forest. Notice how far apart these ponderosas are standing. This spacing helps the trees survive when periodic wildfires inevitably occur. Image by Chris English.

Also, it is important to realize that forests and landscapes will be different when fire is part of the ecosystem again. For the ponderosa pine trees of the Western United States, thick, shadowy forests with densely packed trees are not “natural.”  Many people imagine forestsshould look like this, because that is what happened when fire was excluded. But with proper fire management, trees are spaced farther apart in most forests. These more open forests may not remind you of the shaded woodlands from fairy tales, but we need to accept that truly beautiful forests are healthy forests.

Lastly, although climate change affects everyone on the planet, it is certainly making wildfires more dangerous and unpredictable. When communities and governments take real and important steps to fight climate change, they are helping reduce the risk of fire damage. Changing our behaviors to be more eco-friendly is important, but it is even more important that our governments pass laws to protect the environment and reduce CO2 emissions.

Image of smoke clouds over agricultural fields by Karla Moeller.

Andrew Burchill. (2021, May 05). Fighting Wildfires. ASU - Ask A Biologist. Retrieved May 17, 2022 from https://askabiologist.asu.edu/wildland-fire-fighting 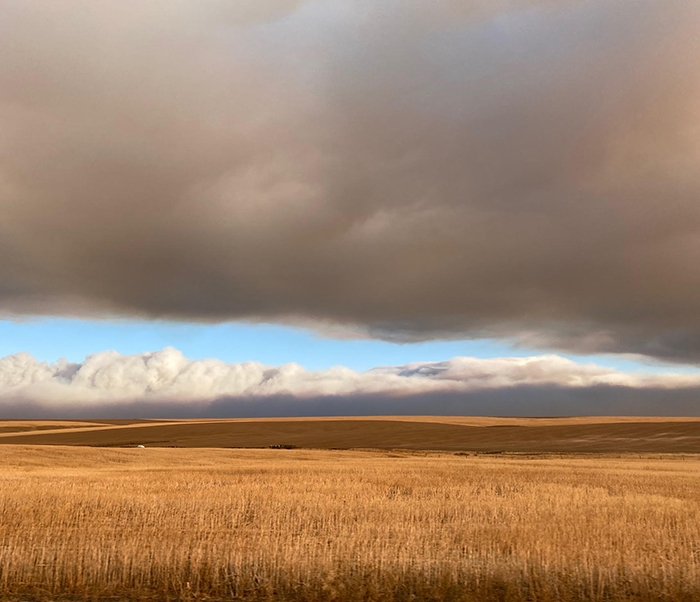 The western United States has had particularly bad fire seasons the past several years. The smoke from wildfires can travel for hundreds of miles, making the air in surrounding areas unhealthy to breathe.

Learn more about the importance of fire and about fighting fires on our podcast with Stephen Pyne, Fire & Life.