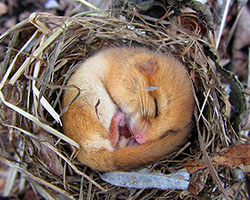 Some mammals, like this common dormouse, hibernate over winter. Image by Zoe Helene Kindermann.

If you poke around on the ground of temperate forests during the winter, you might come across a dormouse burrow. Inside, the critter will be rolled up with its eyes closed and snout firmly tucked under its tail. It looks like it’s sleeping—but it’s not, it’s hibernating.

Cyclic Changes in the Brain

With the help of EEG recordings, we know that activity in the brain changes between being awake and asleep. Sleep can be broken down into two main types: Rapid eye movement (REM) sleep and non-REM (NREM) sleep. During REM sleep, your eyes move rapidly behind your closed eyelids and your brain is very active. In fact, the EEG signals look very much like those when you are awake. However, the brain has a mechanism that stops signals from activating the muscles in your arms and legs. This prevents you from moving during REM sleep and acting out your dreams. During NREM sleep, your brain is still active. However, if you look at EEG recordings during NREM sleep, you will see high-voltage slow-wave activity that look like big waves.

Click to view a description of each of the five stages of human sleep.

In a healthy adult, sleep will cycle through five stages. There are four stages of NREM sleep and one stage of REM sleep. The average NREM-REM cycle is 90 minutes long. However, as we age, we tend to have less and less REM sleep.

Your body temperature slightly drops when you prepare to sleep. Biologists think that this slight decrease is to help signal the body that it’s time for bed. During REM sleep, your body stops controlling its temperature and can continue to cool if you’re not sleeping under the covers. However, because your body cycles between REM and NREM sleep, it never stops monitoring your body temperature for too long. 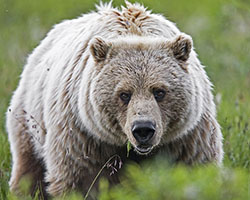 Over the winter, bears enter a deep sleep. Click for more detail.

Some people can sleep through anything: crying babies, slamming doors, wailing ambulances. Indeed, during sleep, the body is much less responsive to disturbances than when it is awake. However, when compared to hibernating animals, sleeping animals are more responsive and more easily awakened. 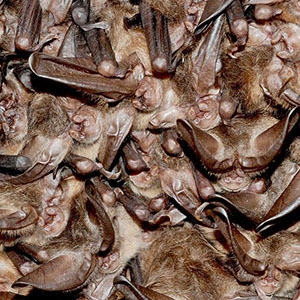 Stages of Sleep | Ask A Biologist
Skip to main content