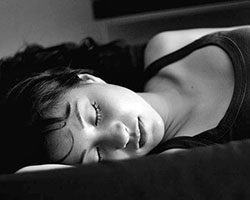 Why do we sleep? Image by Mark Sebastian.

It's late, and your eyes begin to droop. After changing into comfy pajamas you crawl under the covers of your bed. Your mind settles and before you know it, you start drifting into sleep. As you snooze, you may kick your covers off or pull them around you tighter. During certain periods of time, your eyes will rapidly move behind your closed eyelids. And during others, you will probably not react to a dog barking outside or rain suddenly splattering against the window. In fact, it may take nothing short of a minor earthquake to catch your attention when you're snoozing. After a full night of sleep, you awake wondering about the meaning behind your strange dreams.

Does the story above sound familiar? Of course it does; we all sleep. However, despite the fact that we devote about 1/3 of our lives to sleeping, scientists still do not fully understand how or why we sleep. In this article, we will explore what sleep is, why sleep is necessary, and how sleep has evolved.

Sleep is extraordinarily hard to define, but scientists have broken it up in to two main phases. Over the course of a good night's sleep, our brains cycle between these stages, and certain brain activities occur during each one. 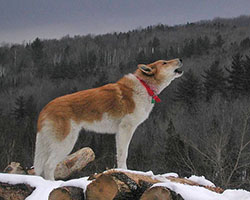 During deep NREM phases of sleep, sounds like barking dogs are not likely to wake us. Image by Getoutofherenow.

When we begin to fall asleep, we enter a non-rapid eye movement (NREM) phase. During this time, our bodies will cool off and become relatively less responsive to disturbances such as honking cars or barking dogs. However, if someone were to hit us while we were sleeping, most of us would easily startle awake. Over time, we drift into deeper and deeper states of NREM sleep.

After about an hour, our brains enter a rapid eye movement (REM) phase. During REM sleep, our eyes move rapidly back and forth behind our closed eyelids. During this time, a person can be easily awoken and may remember dreaming.

Dreams usually occur during REM sleep, but there are cases when they can occur during nREM sleep. Scientists have only recently begun to explore what these strange, hallucinatory experiences are and why we have them. Most studies agree that dreams do not simply replay the day's events. Instead, the content in dreams may be connected with the dreamer’s personality, interests, and overall life experiences.

Intuitively, we know that sleep is essential. If we miss a night of sleep, we usually feel moody and tired until we once again get the chance to go to sleep. While scientists are still not sure about why sleep is essential, we know that sleep is needed to maintain healthy body and brain functions. These functions include maintaining a stable weight and being able to remember how to complete difficult tasks. 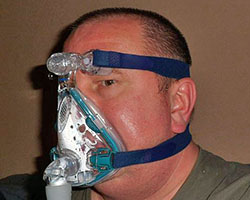 Unfortunately, not everyone is able to consistently sleep. There are many conditions that cause difficultly in sleeping. For example, insomnia, or the inability to sleep, plagues about 40 million people in the United States and is the most common sleep disorder. People suffering from insomnia experience symptoms such as lack of energy, drowsiness, anxiety, and difficulty with learning and remembering. Luckily, most cases of insomnia can be treated through changes in behavior or lifestyle. These changes include keeping a regular bedtime and avoiding technology before bed.

Scientists hypothesize that, over the course of human evolution, sleep patterns changed as we developed higher intelligence. Lesser apes evolved earlier, and so they are thought to have sleep habits that indicate earlier stages of sleep evolution. Lesser apes slept on branches or in other temporary locations, and so had rest that did not allow for long durations of sleep because the locations were vulnerable to predators or to other environmental disturbances. Over time, apes began to sleep in more protected and stable places, allowing them to experience deeper and longer sleep. 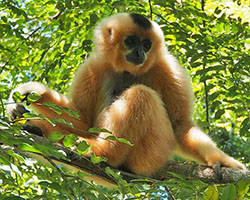 Gibbons sleep in forks between branches and do not modify the branches to create sleeping nests. Click to enlarge.

Scientists believe that this improved sleep quality eventually led to enhanced brain function, which increased intelligence in great apes. And so, as early humans eventually transitioned from sleeping in trees to sleeping on the ground, the improved duration and quality of sleep enabled higher intelligence in humans than in other apes. Higher quality sleep also enabled humans to sleep for a shorter part of the day, giving them more time for learning, socializing, and defending their communities.

While we often think of sleep patterns as those of humans, who usually sleep at night and are active by day, many other animals have different sleep patterns. For example, you’ve probably noticed that if you have a dog it sleeps almost the whole day, with the occasional walk or meal. 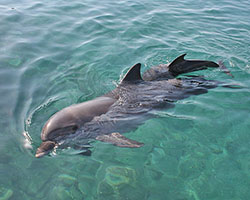 Dolphins and other whales allow half of their brains to sleep at a time, keeping the other half on a low level of alertness to watch out for obstacles and predators. Image by Faraj.

As far as we know, all mammals that live on land experience some variation of NREM-REM sleep cycles. But sea mammals, like dolphins, actually sleep with only half of their brains. This may allow them to stay afloat or keep swimming, because sea mammals need to surface in order to breathe.

Outside of mammals, our knowledge of animal sleep is limited by the number of species that we’ve managed to hook up to an EEG machine. Scientists have done this in animals such as birds, bullfrogs, turtles, and zebrafish, all of which have very unique sleep patterns. Scientists have much more work to do to understand sleep across the many different kinds of animals.

Secrets of Sleep is sponsored by ASU's Center for Evolution and Medicine. Learn more about evolutionary medicine at EvMedEd.org.
Additional images via Wikimedia Commons. Bullfrog by Carl D. Howe. 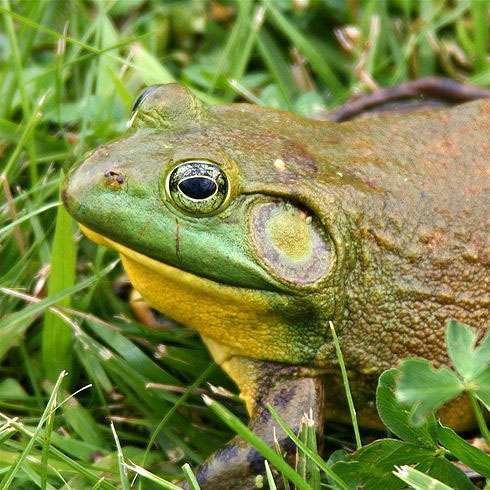 Most animals that we have researched, including amphibians like this bullfrog, show some form of low brain activity periods that we call sleep.