Some plankton produce toxic chemicals that can harm other organisms.

Most of the time, phytoplankton go about their business unnoticed by humans. They quietly grow and divide, float and sink, photosynthesize and die. But every so often, conditions are right to turn an innocent, law-abiding community of algae into a heaving sea of lethal criminals.

Most phytoplankton are harmless to animals. However, a few species can produce toxic, or poisonous, chemicals. Some dinoflagellates and diatoms can make poisonous compounds that cause diarrhea, paralysis, dizziness, and even memory loss. Yikes!

Usually, there aren’t enough of these killer algae in an area to cause problems for the animals that live there and the humans that swim, fish, or go clamming there. When there are a lot of them, though, that spells trouble.

Shellfish like clams, mussels, and oysters eat by filtering phytoplankton and zooplankton out of the water. When they eat killer algae, the poisons get built up in their flesh. If animals—including humans—eat these shellfish, they can get sick.

The poisons can also build up in the bodies of zooplankton that eat the phytoplankton. When fish eat these zooplankton, they get sick or die. If there are enough of the killer algae, or if the chemicals are very toxic, they can cause hundreds of fish to die and wash up on shore.

When Oxygen Runs Out 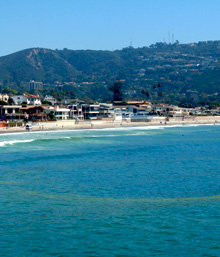 A nontoxic (harmless) phytoplankton bloom on the coast of San Diego, CA.

Seemingly harmless algae that don’t produce toxins can sometimes cause disasters for other marine life, too. If an area near the coast suddenly receives a lot of nutrients—for example, from a storm that mixes up the water and brings up sunken nutrients from the deep, or from a large, polluted river chock-full of fertilizer from farms that empties into the ocean—an algal bloom can form.

In an algal bloom, the phytoplankton say, “Yippee! Let’s grow and divide as fast as possible while we have all this food around!” (Well, they might say that if they could talk).

Once they’ve used up the nutrients that allowed them to grow so quickly, most of the algae sink to the sea floor. There, bacteria gobble them up.

The problem for everybody else living in that part of the ocean is that these bacteria need oxygen to decompose the dead phytoplankton cells. When bacteria use up the oxygen in the water after an algal bloom, animals don’t have enough oxygen to breathe and survive.

That includes everything from tiny krill to large fish and sharks. If they can’t swim fast enough to escape the low-oxygen area, these animals suffocate. Scientists call these places “dead zones.” One famous dead zone is in the Gulf of Mexico, where the Mississippi River empties into the ocean.

Dead zones aren’t permanent. Eventually the bacteria will finish decomposing the remains of the algal bloom, oxygen will start to build up again in the water, and life will return… until the next surge of nutrients sets off the whole cycle again. 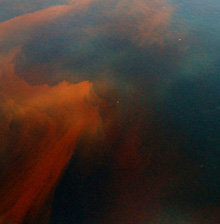 Red tide off the coast of La Jolla, California.

If you live near the ocean, you might occasionally read or hear about red tides on the news. Red tides are caused by blooms of phytoplankton that have reddish pigments. Sometimes these algae are poisonous to fish or humans, but sometimes they just color the water without making anything sick. 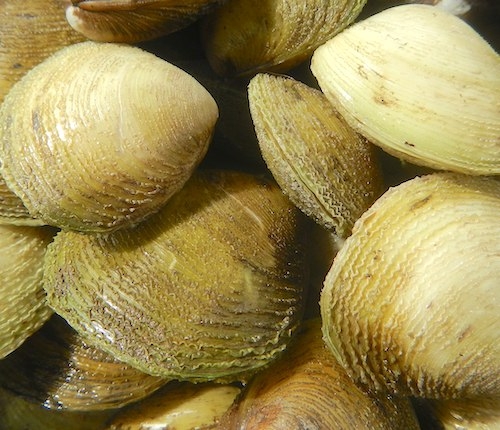 Shellfish become sick when poisons from killer plankton build up in their bodies.