Abundant: very numerous or common. Having a lot of something.

Bioluminescence: the ability of some animals and algae to glow in the dark.

Dinoflagellates: a type of plankton with two tail-like flagellae... more

Micrometer: a very small unit of length. There are one million micrometers in a meter.

Have you ever seen a field full of flickering fireflies? What about a video of glowing jellyfish or anglerfish in the deep sea? These animals aren’t the only glow-in-the-dark creatures on Earth. The most common ones, though, are much, much smaller.

Some plankton can glow in the dark. The word for this is “bioluminescence,” which comes from “bio,” meaning life, and “lumin,” meaning light. Most of these plankton glow blue, but a few can glow green, red, or orange.

Bioluminescent plankton don’t glow all of the time. It takes energy to make the chemicals that allow them to glow. It would be a waste of that energy to glow during the daytime, just like you would be wasting batteries if you used a flashlight on a sunny day.

One example of bioluminescent algae is a dinoflagellate called Noctiluca, or sea sparkle. Noctiluca are so small that thousands of them can fit in a single drop of water. 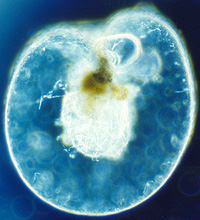 Noctiluca viewed through a microscope. Image by Maria Antónia Sampayo

In places like Bioluminescent Bay in Puerto Rico, an island in the Caribbean, sea sparkle are so abundant that the water sparkles neon blue at night when you run your hand or a kayak paddle through it!

Scientists think that Noctiluca flashes to startle or scare away its predators. The bioluminescence might also attract bigger predators to eat Noctiluca’s predators, just like a burglar alarm that alerts the police to come to someone’s house to catch a robber.

Although some Noctiluca are big enough to be seen without a microscope, most are too small for you to see unless you notice their flash. Some tiny animal plankton (zooplankton) can also glow in the dark, though, and they are big enough to see with the unaided eye.

Most bioluminescent zooplankton don’t glow in the dark themselves. Instead, they squirt globs of glowing chemicals into the water.

Many zooplankton use these glowing gobs of goo as a defense against predators. A fish that’s trying to catch a copepod will be confused by the bright flash of light; it will try to attack the bioluminescent goo instead. That gives the copepod time to escape.

Some zooplankton also use bioluminescence to attract a mate. You might say they write light-up love letters in the water! 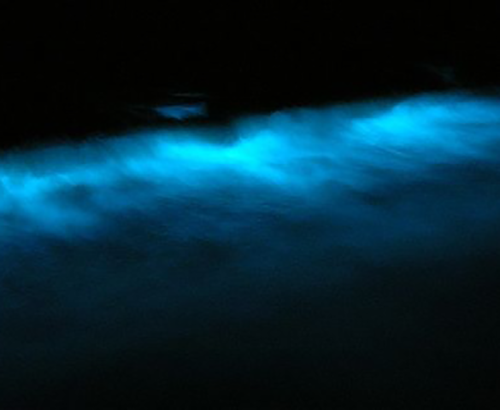