Decade: a period of ten years.

Global Weather Weirdness and the Ocean

Here's a quick quiz. What do cars, trucks, chainsaws, rice fields, and cows have in common?

If you answered, “Not a lot,” you’d be partly right. But there is one thing that ties these unrelated objects together: they all release greenhouse gases into Earth’s atmosphere. These gases hold in Earth's heat much like the glass in a greenhouse keeps the building warm by holding in heat.

Is it Getting Warm in Here?

The most famous of these gases is carbon dioxide, or CO2, but there are others too, like methane. Our cars, trucks, and chainsaws release CO2. The cow and rice field are sources of methane gas. As more greenhouse gases build up in the atmosphere, Earth becomes one big greenhouse. Over decades, trapped heat starts to build up, slowly cooking our planet.

This heat build-up is called “global warming,” but many scientists prefer the term “global climate change” instead. That’s because as gases like CO2 warm things up, Earth’s complicated climate starts to change, and it changes in different ways in different places. Some places get more rain, some get less. Some get warmer summers, and some get colder winters, surprisingly enough.

When you look at the numbers, it doesn’t seem like temperatures on Earth have really changed that much. In the last century or so, the globe has only warmed up by about 1.4˚F on average! But just like your body, our planet is very sensitive to change. 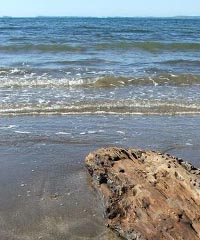 On land or in the ocean, our planet is sensitive to change.

When you have a fever and take your temperature, your thermometer might read 100˚F. That’s not very far from your normal 98.6˚—only 1.4˚, in fact—but you might have a headache and chills, and you might feel achy, sleepy, and sick to your stomach.

Greenhouse Gases and the Ocean

Even though politicians and the news media still argue if our planet is warming and the cause, most scientists agree that Earth’s climate is definitely changing and that humans are largely the reason for the change. They also agree that things would be a whole lot worse if it weren’t for the ocean.

The ocean is able to suck up CO2 from the atmosphere and turn it into compounds that stay in the water. This isn’t done by living creatures; it’s simply a matter of chemistry and the chemical reactions between CO2 and water.

The good news for humans and other terrestrial living things is that the ocean has taken up a lot of the CO2 we humans have released into the atmosphere. It’s good news because CO2 that ends up in the ocean can’t act as a greenhouse gas.

Now for the Bad News 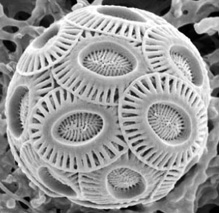 Emiliania huxleyi, a type of phytoplankton that builds calcium carbonate plates to surround its body, is at risk as the ocean becomes more acidic. Image by Jeremy Young

Unfortunately, there’s bad news too. When CO2 and water react, they form a molecule called carbonic acid. As the ocean has slurped up more and more CO2 from the atmosphere, seawater has gotten more and more acidic because of all the carbonic acid floating around.

That doesn’t mean going swimming at the beach is dangerous now. In fact, the ocean is naturally less acidic than pure water! Still, these changes in pH, or how acidic the ocean is, spell trouble for many creatures that live in the sea.

Some plankton build shells around their bodies to protect themselves. These shells are made of a mineral called calcium carbonate (that’s the same thing as chalk).

The problem is that it gets harder and harder for plankton to build these shells as the seawater they live in gets more and more acidic. Corals are in danger, too, since they also use calcium carbonate to build their reefs.

What’s in Store for the Future?

Scientists are worried about these creatures that depend on calcium carbonate to survive. They’re also worried that the ocean is becoming less able to suck up that atmospheric CO2. 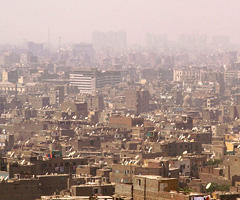 We need to reduce our greenhouse gases if we want to protect the Earth.

Imagine the ocean as being like the space under your bed. When you’re tidying your room, you can only put so many boxes and toys in that space. Eventually, it fills up, and now you’ve got to really clean or risk getting in trouble with your parents.

As a planet, we’ve got to do the same thing. Before the ocean takes up as much CO2 as it can possibly hold, we’ve got to clean up our act and stop producing so many greenhouse gases!

Additional images from Wikimedia by Wicki. 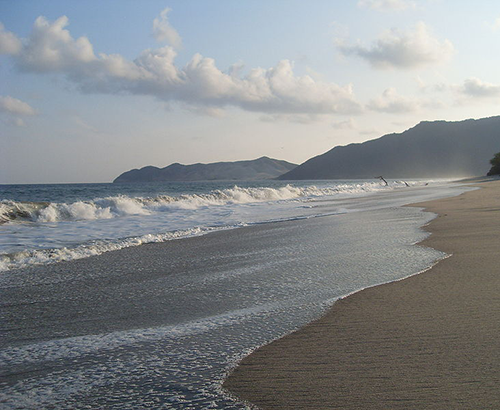 The ocean takes CO2 from the atmosphere and turns in into compounds that stay in the water.