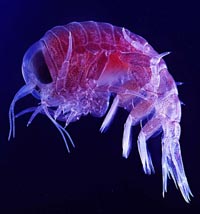 Some plankton are made of just one cell while others, like this zooplankton, are made of many cells.

Plankton can be small. Really, really small. Most are so tiny, you can’t see them without a microscope. That’s also true for many of the cells that make up your body—red blood cells, muscle cells in your toes, cells in your liver and stomach. And it’s true for bacteria as well.

You know that humans are definitely NOT bacteria. Neither are the plants and animals you see around you every day. But what about other microscopic creatures? What about phytoplankton and zooplankton? Are they a kind of bacteria?

There are many kinds of plankton: some are bacteria, some are animals, and some are related to plants. Just because an organism is very small doesn’t mean it’s a bacterium. If you could shrink yourself down until you were minuscule enough to go swimming inside a bacterial cell and in a phytoplankton or zooplankton cell, you would see some major differences.

Swimming Inside a Cell

One of the most important differences between bacteria and other cells is that bacteria don’t have “compartments” for carrying out their daily activities like breaking down food and destroying dangerous molecules. Non-bacterial cells, on the other hand, have all sorts of compartments, called organelles. Each organelle has a different job to do.

You can think of a cell with these compartments as being similar to a small village. In that village, there are farmers, teachers, carpenters, doctors, and other people. Each person has to do their job in order for the village to stay well fed, healthy, and happy. In a cell, each organelle has to do its job, or else the cell can’t survive. 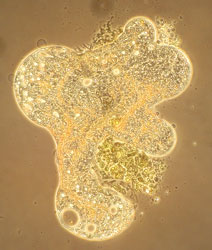 One organelle is called the nucleus. This compartment is a protective ball that shelters the cell’s DNA. Because bacteria don’t have a nucleus, they’re called prokaryotes. Cells that do have a nucleus and other compartments are called eukaryotes. These words come from the Greek word karyon, which means “nut” or “kernel” (the nucleus looks like a round nut inside the cell).

Some plankton are prokaryotes. There are bacteria that decompose, or break down, dead organisms and animal waste in the water. There are also photosynthetic bacteria that use the sun’s energy to turn carbon dioxide into sugars. These are called cyanobacteria, and they’re a type of phytoplankton.

Other kinds of phytoplankton, though, are eukaryotes. They have a nucleus and other compartments. Zooplankton—even the smallest ones made up of just one cell—are also eukaryotes, since they are animals, and all animals are eukaryotes.

Above is a young polychaete worm. Learn more about this and other plankton in this video.