Hadley cells: a type of air movement near the equator, where air rises, then moves to the north and south, then falls back down toward Earth. Named after George Hadley, who studied the atmosphere. 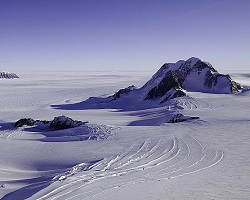 Despite all the ice and snow on the ground, most of Antarctica is a desert. Click for more detail.

When you picture a desert, you may think of heat, sand, and a lot of empty space. While this can oftentimes describe a desert, it doesn’t always. As an example, think about the continent of Antarctica.

Antarctica is covered in ice and has minimum temperatures that reach below a chilling -80˚C (-112˚F). But Antarctica receives very little rain and snow, which makes it a desert. The low amount of rain or other precipitation that falls from the clouds, like snow or sleet, is often what defines a desert.

Most deserts get less than 20 inches of precipitation per year. But some deserts, like the Atacama Desert of South America, get almost no rain at all. So how come some biomes, like tropical rainforests, get so much water, while deserts get very little water? Or to think of it another way, what locations and conditions can create a desert?

One main thing that affects where deserts occur is a physical property of air—it can hold more water when it is warmer. 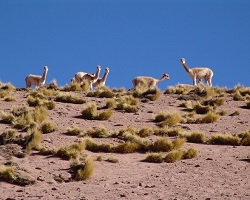 Vicugnas live in one of the driest deserts, the Atacama. Click for more detail.

Deserts cover around 20% of the Earth and are on every continent. They are mainly found around 30 to 50 degrees latitude, called the mid-latitudes. These areas are about halfway between the equator and the north and south poles.

Remember that moist, hot air always rises from the equator. As this air climbs higher in the sky, it cools. Cool air can hold less water than warm air. This means that as the air cools, clouds form that release most of the water they hold. Because the cooling air is above the equator, the moisture rains back down on the tropics. 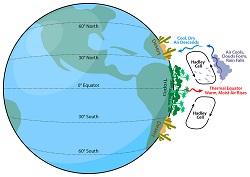 Rainforest and deserts are wet and dry due to the cycle of the air. Click to enlarge the image. You can also listen to Geoscientist, Joellen Russell, talk about the Hadley Cells below.

When the cool air begins to fall back toward the ground, or descend, it starts to warm up again. This warm, dry air can hold a lot of water, so the air starts to suck up what little water is around. At 30 to 50 degrees north and south of the equator, this falling air makes dry air drier. It also turns the land below it into a desert.

Oftentimes you will find a desert on one side of a mountain range, but not the other. Why might that be? If we think again about the rising and falling air that helps make deserts, it might make a little more sense. 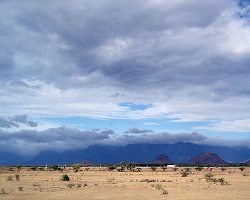 Here we see the dry side of a rainshadow. Click image for more detail. 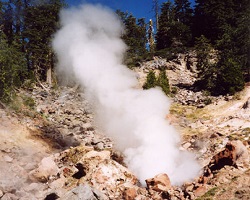 While this geyser is found in the forest, it is a good example of water vapor. Click for more detail.

You may have heard of water beds, but what about water blankets? Not a blanket made of liquid water, but one made of water vapor. Water vapor is essentially water-air, like the vapor that comes off of a boiling pot of water. Because deserts are so dry, they have very low humidity—the measure of water vapor in the air. So what does water vapor do for a biome? 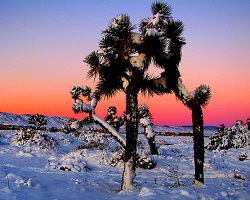 A Joshua tree in the desert is surrounded by snow in winter. Image by Thomas.

At night, the sun no longer heats the desert and the heat from the day doesn’t stay trapped. Because of this, some deserts can get cold at night, dropping to below 40F, which is definitely coat weather.

In the daytime, the cold air from overnight doesn’t stay trapped. Because of this, when the sun rises, it can get very hot very quickly. Sometimes it can reach over 120F in the desert the very next day.

Karla Moeller earned her PhD in Biology at Arizona State University, studying how animals survive in extreme environments like the desert. She is an animal physiologist, a science writer, and a children's book author. 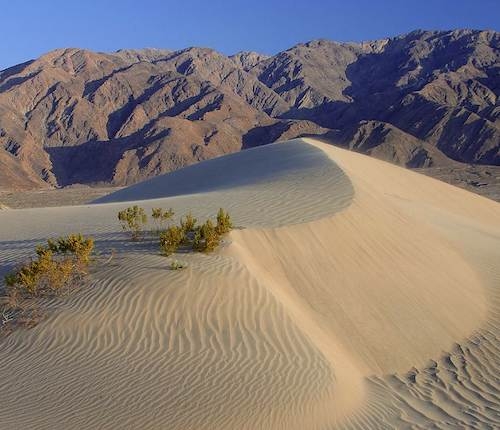 Death Valley, California is the desert in which the highest temperature on Earth was recorded.