Essential vitamin: a vitamin is called essential when we need to get it from our diet.

Slang: sometimes playful, and informal words or speech that can also be used in a negative manner to describe people or places.

Vitamin C: an essential vitamin found in fruits and vegetables such as oranges, strawberries, broccoli and peppers... more

Vitamin deficiency: when you do not eat enough of the vitamin.

The story behind scurvy

Imagine you are on a sailing ship in 1747. You left England only a couple of months ago and you felt fine. Now you are so tired you can barely walk. Your gums are swollen and so sore it hurts when you are eating. Your teeth are falling out. When you look at your legs you notice they are swollen and purple from bruising. 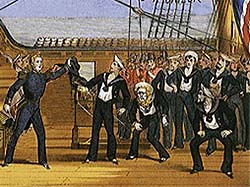 Lucky for you, a passenger on your ship is very interested in your condition. His name is Dr. James Lind. Dr. Lind wants to discover what is causing you so much pain that you can't work. After examining all the sailors on the ship he finds 11 more sailors that feel the same as you do. Dr. Lind divides you into six groups with two sailors in each group. On May 20, 1747 he is ready to begin the first clinical nutrition experiment.

How did Lind conduct his experiment?

What happened during Lind's experiment?

Only you and the other lucky sailor who ate the oranges and lemon felt better. In fact, in only six days you felt great and were able to start working again. The other sailors in the experiment felt worse.

This is a real story. Dr. Lind had discovered the missing nutrient in your diet. Can you guess what made you feel better? If you guessed that it was from the vitamin C in the oranges and the lemon you ate, you are correct! The disease you and your fellow sailors were suffering from is scurvy. Scurvy is a disease caused by a vitamin C deficiency.

Vitamin C is mainly found in fruits such as oranges, grapefruit, lemons, strawberries, and melons; or it is found in vegetables such as broccoli and bell peppers.

Why were limes added to Royal Navy sailors diet?

Scurvy was a huge problem for English sailors in the 1600s and 1700s. Because of what Dr. James Lind discovered, the Royal Navy made sure that all sailors had lemon juice to drink when they were at sea for longer than one month. The sailors thought that it was the acid content of the lemon juice that cured scurvy (vitamin C is also called ascorbic acid). Doctors thought that lime juice would work better because it has more acid than lemon juice, so they substituted lime juice for lemon juice on the English Royal Navy ships.

And that is how the English sailors became known as Limeys! Since that time the word has been used as a negative slang term to describe British Nationals, and is therefore not considered a polite word to use.

Do people still get scurvy?

If you think scurvy is a disease of the past, or maybe only in developing countries, think again. Three studies done at Arizona State University showed that approximately 3 percent of the students had blood vitamin C levels indicating scurvy. This means over 3,000 students have indications of scurvy. Another study of 500 outpatients revealed 6 percent had a similar vitamin C deficiency. Finally, National Health and Nutrition examination Scurvy (NHANES Ill) reported 13 percent of US adult males and 9 percent of American adult females have blood vitamin C levels indicating scurvy. That's over fifty million American adults. It turns out that a balanced diet that includes fruits and vegetables is important for everyone.

Additional images from Wikimedia by NotFromUtrecht.

Read more about: Why Are English Sailors Called Limeys? 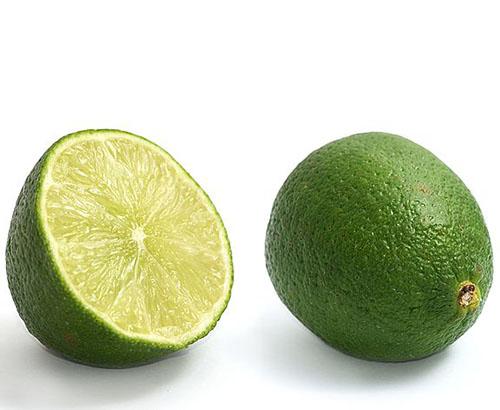 How the simple lime became an important part of a sailors diet.

Why Are English Sailors Called Limeys?