Milling: the act of grinding or peeling something.

Supplement: a product made to add something extra to a diet.

What is a Vitamin?

Growing up, you may remember watching the Flintstones kids vitamin commercials. Each one ends with the jingle “We’re the Flintstones kids 10 million strong, and growing”. It’s a catchy tune and once it’s in your head, it’s hard to get out. Because of messages like this, we know vitamins are good for us. But what are they, exactly? 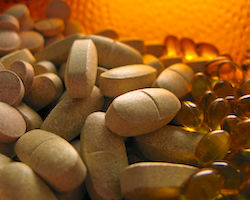 There are plenty of advertisements telling you to take vitamins. But do you really need to? Image by bradley j.

Vitamins are substances that humans need to survive, but we need them in such tiny amounts that it is hard to even measure them. Vitamins help us control our body temperature, get rid of wastes, make DNA, build and break down muscles, and keep our bones strong. Vitamins also help with blood clotting, getting energy from food, and allowing our nerves to communicate and our brains to function. Our bodies cannot make most vitamins, so we must get them from our food or the sun. There are 13 vitamins that humans need: A, D, E, K, and C, as well as eight different B vitamins.

Over billions of years, the organisms that we evolved from lost the ability to make many of these vitamins. For example, humans and some other mammals have a genetic mutation that makes us unable to produce vitamin C. This may be due to the fact that we can now get it so easily from our diet, as we have access to plenty of fruits and vegetables that are rich in vitamin C. In the past, the changing diets of humans have helped us come to understand the importance of vitamins.

In Southeast Asia, during the 1800s, many people were dying from a mysterious and terrible disease called Beriberi. It involved nerve damage and heart problems, and people were dying in painful ways. But Beriberi hadn’t been a problem until we invented better rice milling technology. The technology removed the rice husk and left behind the white rice that we often still eat today. When people started using this new process, there were outbursts of this horrible disease in cultures where rice was an important part of the diet. 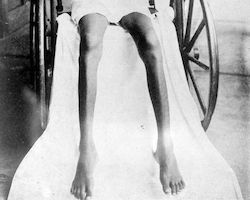 One type of beriberi causes nerve damage, numbness of hands and feet, and severe weight loss. Click to enlarge.

People wondered why this was happening. Scientists were just discovering germs and infections that were causing disease, so they thought Beriberi might be an infection. No one was looking at what was missing from the diet. Finally, a doctor named Christiaan Eijkman realized that brown rice had the “anti-beriberi factor”. He later discovered that white rice was missing Vitamin B1, or thiamine. A lack of Vitamin B1 was causing Beriberi.

It wasn’t until the early 1900s that many vitamin chemical structures were even identified in a lab. A Polish biochemist named Casimir Funk wanted to give these mysterious substances a name. He chose the Latin word for life, which is vita, and the word amine, which is the nitrogen-based chemical structure that he thought all of these substances shared. (Though this was later found to be wrong.) He combined the two words together to form vitamine, which we now know as vitamin. In 1912 he published a paper using his new word, but it still took years before it caught on.

You may have wondered why vitamins are named with what may seem like random letters and numbers. For example, there are eight B vitamins in total and there is a vitamin B12, but there isn’t a vitamin B11. During the naming process, there were a lot of substances that were labeled as vitamins. Later, scientists found out that some of these were not actually vitamins, so those names (or numbers) were taken out of the vitamin list.

Where Do Vitamins Come From? 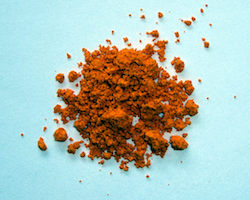 Riboflavin (vitamin B2) is an essential vitamin that is involved in cell cycles of energy production.

Most of our vitamins come from plants. Plants actually need vitamins just like humans do, but unlike us, they are good at producing all of their own. However, there are two vitamins that we do not get from plants—vitamin D and Vitamin B12. Vitamin D we mostly get from the sun. Interestingly, humans can actually produce their own vitamin D by a chemical reaction in our skin when we are in the sun. That’s probably the way we are meant to get it because there is very little vitamin D in food. It’s almost impossible to eat your daily dose from food, but some foods, like milk, often come with added vitamin D.

Vitamin B12 doesn’t come from plants or sunlight at all. All of the B12 in the world is made from bacteria. We get it from eating animal products, as it is produced by bacteria that live in the digestive systems of animals. The animals absorb the vitamin B12 that the bacteria make in their guts. It turns out humans have these bacteria too, but they live too close to the end of our digestive systems, so we are unable to use the B12 they make. Humans get around this by eating meat, animal products, and food enriched with B12, or by taking supplements.

About the Author: Danielle Penick is a registered dietitian in the Phoenix valley and writes for the cancer nutrition blog Survivors' Table.

Read more about: Vitamins: Vital or Not? 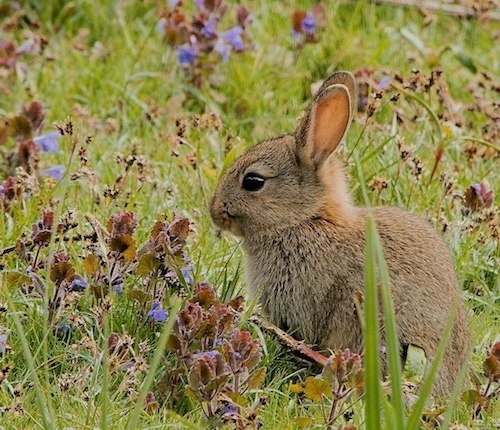 Bacteria are the only organisms that can produce B12, and lots of gut bacteria make this vitamin. Some animals, like rabbits, eat their feces and absorb more vitamin B12 through that process.

Vitamins: Vital or Not?