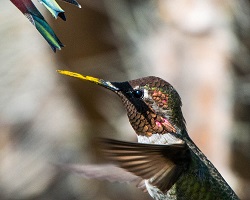 This hummingbird has a beak coated in pollen, some of which it will leave behind on the next flower it visits. Image by Kpts44.

Flowers don't provide hummingbirds with delicious nectar out of kindness. Hummingbirds are pollinators. This means that when a hummingbird comes to a flower to get a meal, it brushes against the male parts of the flower and gets pollen grains all over itself. When it buzzes off to the next flower, the pollen rubs off onto the female parts of the new flower. In this way, hummingbirds help flowers make new seeds and the next generation of flowers.

Different species of hummingbirds have differently shaped beaks that evolved to allow them to drink from a certain kind of flower. In return, the flower species it feeds from has evolved to produce nectar especially tasty to hummingbirds and to prevent bees and other animals from stealing it.

Different hummingbirds have evolved different beak shapes and sizes to go with certain types of flowers. Click for more detail.

Unfortunately, scientists don't know much about how the first hummingbird evolved. Hummingbird bones are so small and fragile that they usually don't last long enough to become fossils. 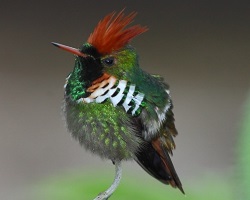 Hummingbird evolution has caused a huge range of shapes and sizes, as this frilled coquette reminds us. Image by Hectar Bottai.

Researchers have dated the oldest hummingbird fossil to thirty-five to thirty million years old. Amazingly, it was found in Germany, not America. The first hummingbirds may have evolved in Europe, moved to the Americas and then died out in Europe.

Scientists studying the DNA of hummingbirds suggest that the newly arrived American hummingbirds first reached South America, where they then began to split into hundreds of species and move north. These splits began around 22 million years ago, but the evolution of hummingbirds into new species continues today. 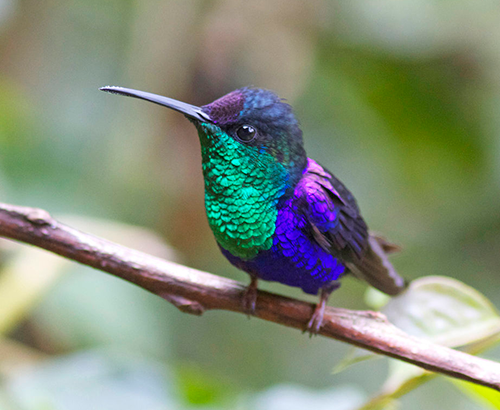 Vibrant colors, like on this violet-crowned woodnymph, have evolved to help males win mates.