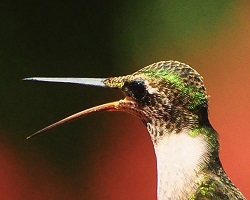 When a hummingbird opens its mouth as wide as it can to catch a bug, its beak actually bends. Click for more detail.

Hummingbirds are famous for drinking nectar out of flowers. They're nature's sugar addicts. But they don't live on nectar alone. Hummingbirds eat insects to add proteins and minerals to their diets. They may pick these insects off leaves and trees (a process called "gleaning"). They're also skilled enough fliers to catch fruit flies and other small bugs in midair (which is called "hawking.")

Humans may be told that snacking between meals is going to ruin their dinner, but hummingbirds eat like there's no tomorrow—if they don't, they might not live through the day. A hummingbird needs a lot of food. 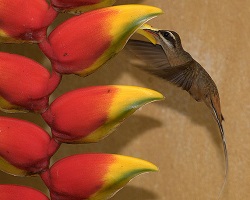 This Planalto Hermit in Brazil is having a meal at a big cluster of flowers. Click for more detail.

A hummingbird eats about half of its body weight in sugar daily and may have a meal up to every ten minutes. In eight hours, that bird could have up to forty-eight small meals! A single hummingbird may also consume hundreds of fruit flies a day.

The hummingbird's brain is tiny, no bigger than a pea, but it's quite large for the size of its body. This brain lets it remember exactly where it found a meal yesterday and find that patch of flowers or hummingbird feeder again using visual landmarks. Their good eyesight also helps them notice flowers and tiny insects that humans often overlook.

A hummingbird may defend a particularly good patch of flowers from other hummingbirds, but if too many birds come to fight them for it, they'll move on to seek meals elsewhere. 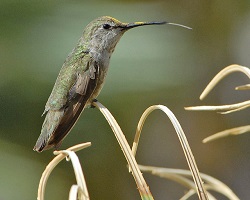 Hummingbird tongues are very small, like the one shown here. But they do more work than you would think. Click for more detail.

At one point, scientists believed that hummingbirds drank nectar by sucking it up like juice through a straw. But we now know that although the shape of the beak helps the bird reach deep into a flower, its long, thin tongue does the real work. A hummingbird licks nectar up, like a dog lapping at a bowl of water. Not very much nectar actually makes it into the bird's mouth in one lick, but this isn't a problem. A hummingbird can lick up to thirteen times per second. 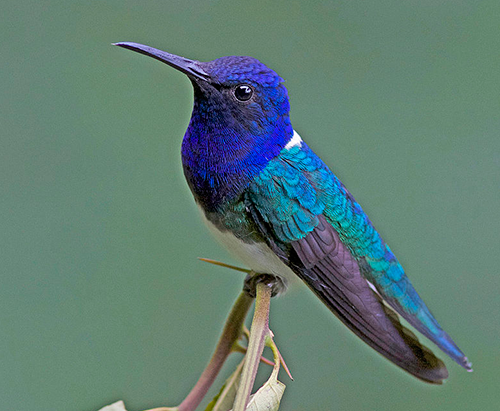 Bright males like this white-necked jacobin may have a better chance to defend a territory where they can find food.