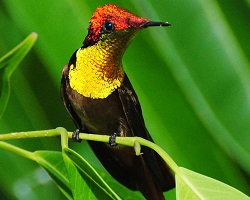 Many male birds, like this ruby-topaz hummingbird, will find a nice sunny spot to show off their bright colors to females. Image by Ysmad.

To breed, a male hummingbird must convince a female that he's more healthy, fit and handsome than the next male hummingbird. Most species do this by showing off their fancy feathers and flight moves.

Some turn themselves toward the sun so that they flash their brightest colors at the female, and then they dive straight at her. During this dive, they may fly up to forty-five miles an hour and beat their wings up to two-hundred beats per second.

They pull up before they reach her, but this sudden change in direction puts as much force of gravity on them as a fighter pilot doing tricks. Fighter pilots faint under this strain without special equipment, but hummingbirds dive again and again without taking any kind of damage.

There is one group of hummingbirds that don't use a flight display to impress females. Hermits, a group containing thirty-four species (about 10% of all hummingbird species,) usually have few iridescent feathers to show off. Hermit hummingbirds are unlike most hummingbird species because males gather in large groups and sing together to attract females. 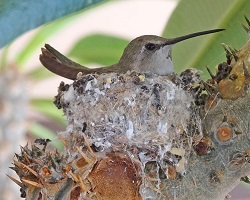 This hummingbird must keep her eggs warm until they hatch. Click for more detail.

Every hummingbird mom is a single mother. Male hummingbirds provide no care to their offspring. In fact, after they mate with the female, they simply move on and may never see her again.

However, hummingbird females make do. Most build their nests from all sorts of odds and ends, like moss and lichens and grass and even lint from a dryer for clothing, and then bind it all together with spider webs. These nests are very hard to find.

After mating, the female lays two tiny eggs. The smallest species lays eggs that weigh only 0.4 grams, a little less than a regular-sized paperclip. 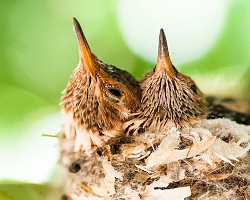 Baby hummingbirds spend an average of twenty days in their nest before they learn to fly. Although the nest seemed big when they first hatched, by the end it's very crowded. Image by Spamcow.

If the mom takes good care of her eggs, they will eventually hatch into tiny, featherless chicks. Their mom feeds them by sticking her long beak down their throats and throwing up a sticky mix of bugs and nectar. She'll take care of them for up to twenty-five days after they are old enough to fly from the nest.

Images via Wikimedia Commons. Image of young nestlings at the top right by Belizian. 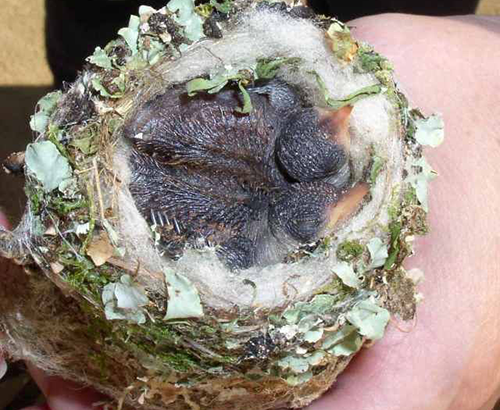 From the time they are tiny babies in nests until they are adults, hummingbirds have to work hard to survive.