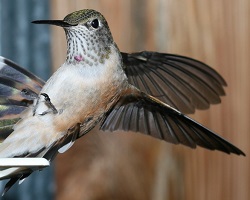 This broad-tailed hummingbird is flying in to land on a feeder, but she could easily hover and eat at the same time. Click to enlarge.

No other bird in the world flies like a hummingbird. Hummingbirds can fly forward, backward and even, briefly, upside-down. Their flexible wings beat in a figure-eight pattern dozens of times a second—up to eighty or ninety beats a second in some of the smallest species. This special figure-eight pattern lets them hover as well as any helicopter.

Hummingbirds zip around so quickly their beating wings are a blur. When two meet each other, often the local hummingbird chases the stranger until it's too far away to steal the local bird's flowers. 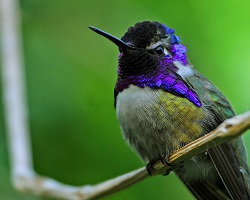 This Costa's hummingbird is catching his breath. Image by San Diego Zoo.

It might seem like hummingbirds never get tired. However, this isn't true. A hummingbird burns a huge amount of energy flying. Between meals, hummingbirds spend a lot of time perched high in the trees.

Do hummingbirds do anything slowly? They do. If the night gets too cold, or a hummingbird doesn't get enough to eat during the day, it must take steps to save energy, or it won't live until morning. At times like this, it will go into a deep sleep called "torpor."

The hummingbird spends the whole night this way and then warms back up in the morning, ready to go in search of a sugary meal. During torpor, the hummingbird's whole body slows down. Its heartbeat slows. Its speedy metabolism burns fewer fats and sugars. Its body temperature drops. It may even appear dead. 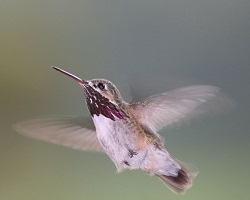 This Calliope hummingbird migrates from Canada and the United States into Central America for the winter. Image by Kati Fleming.

Hummingbirds burn energy constantly to maintain their fast lifestyles, but nothing burns more energy than their yearly migrations. To prepare for this, they stuff themselves until they're so fat they can barely fly. Then they set off.

You might think that because hummingbirds are so small, they can't fly very far, but some species fly thousands of miles. Most species that live outside of the tropics migrate to warm climates for the winter. Hummingbirds near the equator usually don't migrate.

Stephanie Bittner. (2014, May 20). The Life of a Hummingbird. ASU - Ask A Biologist. Retrieved June 27, 2022 from https://askabiologist.asu.edu/life-hummingbird

Stephanie Bittner. "The Life of a Hummingbird". ASU - Ask A Biologist. 20 May, 2014. https://askabiologist.asu.edu/life-hummingbird 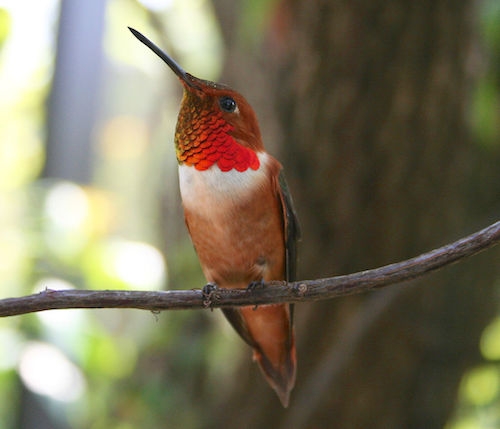 Some rufous hummingbirds fly up to 2,000 miles over the course of migration.