Anther: the part of a flower that creates and stores the male reproductive cells (pollen) of a plant.

Inheritance: genetic information passed down from a parent.

When looking for something to experiment with, Mendel turned to what was already available in his own backyard: the common pea plant.

The pea plant was perfect for Mendel's experiments for a number of reasons. First, pea plants were easy to grow and could be grown quickly in large numbers. 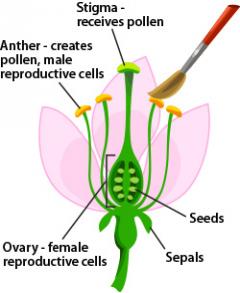 With the help of a small brush, Mendel was able to move pollen from one plant to another to control which plants were being mated.

Second, the shape of the flowers made it easy to control which plants were being mated.

Mendel controlled breeding by separating the male and female parts of the flowers so they couldn't reproduce on their own. Next, he used a small brush to move pollen between plants.

Lastly, pea plants had a number of visible traits, called phenotypes, that were easy to identify. The inner pea color, for example, could be either green or yellow.

At first glance, pea plants might seem to have very little in common with animals or human beings. A closer look into the inside of the cell, however, will show you that the way that genes and chromosomes work is extremely similar in all living things. The same rules that determine how traits like pea color are passed down from parent to offspring also determine how traits like freckles or dimples are passed down in humans.

Mendel mated two different true breeding strains together, a green pea strain and a yellow pea strain, to see what phenotype the first generation of offspring would have. When Mendel looked at the offspring, called the F1 (or first) generation, he saw that every single one of the plants had yellow seeds.

Next, Mendel took the first generation plants and mated them with each other. What color seeds would you expect the next generation to have? To Mendel’s surprise, 25% of the offspring, called the F2 (or second) generation, actually had green seeds, even though all of the F1 parent plants had yellow seeds!

This result led Mendel to believe that it was possible for a trait to be present, but not visible, in an individual. Something from the original green parent plants was skipping a generation and being passed to the grandchildren. Mendel repeated this experiment with many different characteristics. He tested inner pea color, outer pea color, pea shape, flower position, stem length, unripe pod color, and pod shape. He had similar results every single time.

How is this possible? Let’s take a closer look at what’s happening on a genetic level with the help of a Punnett Square. 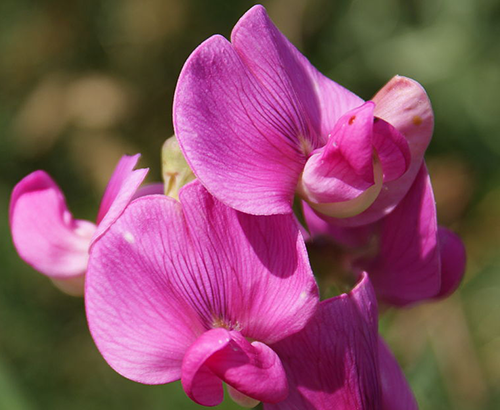 The shape of pea flowers helped Mendel control breeding of the plants for his experiments.