Heterozygous: having two different versions of a gene.

Homozygous: having two identical versions of a gene.

Punnett squares are a useful tool for predicting what the offspring will look like when mating plants or animals. Reginald Crundall Punnett, a mathematician, came up with these in 1905, long after Mendel's experiments. Let's take a look at how Punnet squares work using the yellow and green peas example from Mendel’s garden experiments. 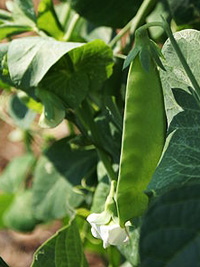 For every gene, different versions called alleles exist. Alleles control things like pea color or the presence of dimples on your face. Children inherit two alleles for each gene from their parents, one from the mother and one from the father.

The genotype refers to which two alleles an organism has. Sometimes both alleles are the same and sometimes they are different. The phenotype refers to the visible trait that results from the combination of alleles that are present.

Mendel began his experiments with true breeding strains, meaning plants that have offspring of only one phenotype when mated. In true breeding strains, both alleles are the same for a gene. Since there is only one kind of allele present, mating two plants from the same strain will produce offspring that have the same phenotype and genotype as their parents. Plants or animals with two identical alleles for a gene are said to be homozygous.

When Mendel looked at the results of this mating, he saw that all of the offspring had yellow seeds. How did this happen? If one of the parent plants had green peas, why didn't a single one of the children plants have green peas? We can answer these questions and understand what's happening to the alleles in this crossing with the help of a Punnet Square.

Begin by writing the parents' genotypes along the top and side of the Punnet square. 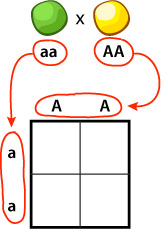 In this case, all offspring have the same genotype and phenotype. The order of the letters doesn’t make a difference in the phenotype (aA is the same as Aa) but the capital letter is usually written before the lowercase one. These offspring are said to be heterozygous, meaning that they have two different alleles for pea color.

Despite the fact that both alleles are present in the offspring, the traits did not blend together to result in yellowish-green peas. Instead, only one phenotype was visible and all peas were yellow. Because of this, the yellow pea phenotype is said to be dominant, meaning that it is visible in the heterozygous individual.

For the second generation, Mendel mated the heterozygous offspring from the first generation together.

When Mendel looked at the offspring from this mating, he noticed that 1/4 of the children plants had green seeds. Why did this happen? How was it possible for some of the offspring to have green seeds when both of the parent plants had yellow seeds? Let's once again use a Punnet square to answer these questions and understand what's happening to the alleles in this crossing.

By looking at the Punnett square, we see that there are three possible genotypes that could result from this crossing: AA, Aa, aa. The genotypes AA and Aa will result in the yellow pea phenotype because A is dominant. Only aa will produce the green pea phenotype.

In the F2 generation, only 1 of the 4 boxes produced green peas. In other words, 25% of the offspring had green peas. This number tells you the probability, or likelihood, that an offspring will produce green or yellow peas.

To learn more about Mendelian Genetics and the different ways that genes determine phenotype, try solving these Punnett Square puzzles from the Biology Project. 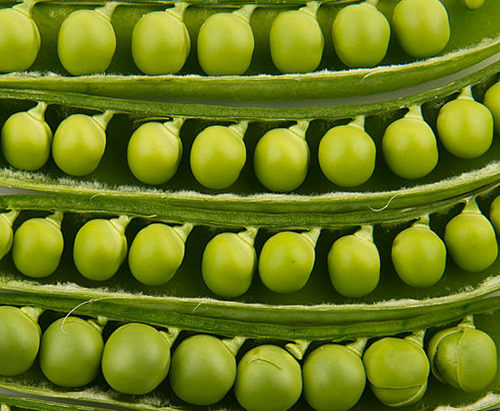 Mendel recorded many different traits of the peas, including pea and pod color and shape.