Ancient Egypt gets a lot of credit for having advanced knowledge about the human body in around 2800 BC. That’s almost 5,000 years ago! Most ancient biologists studied medicine and anatomy (the structure of the human body). Those subjects helped them keep people alive. Egyptians also used anatomy to deal with death. 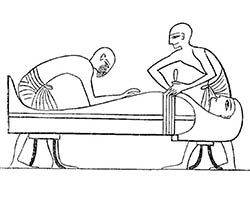 Egyptians learned a lot about the human body to better prepare the dead for burial.

The people who prepared bodies for being buried were called embalmers. They had to know a lot about the human body to do their jobs. They had to know where organs like hearts and lungs were so they could take them out. They even knew how to pull brain tissue out of the skull through the nose.

Thankfully, Egyptian biologists also knew how to help people when they were still alive. Their medicine helped people stay alive. They used plants, especially herbs, to treat common problems like fevers or pain.

Egyptians and many other ancient people knew plenty about plants and animals (including humans). But it was the Greeks who coined the term biology. They smushed together two Greek roots to make the word. Bio- means “life” and –ology­ means “study of.” So biology means the study of life, or all the things that have to do with living things and how they work. 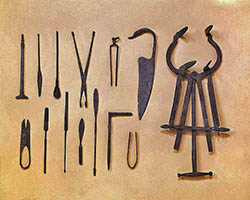 Tools like these were used by the Greeks to perform surgery. Their understanding of biology was already fairly well advanced when they created the term "biology." Image by WellcomeTrust.

The Greeks spent a lot of time studying medicine. When the Roman Empire conquered them in 146 BCE, the Greeks had a system that explained how people got sick. Though their system was not correct, it was a large step forward in biology.

Aristotle lived around 350 BC and is well known for advancing science, including biology. Before him, no one focused much on studying animals. When Aristotle realized some animals had similar anatomy, he began separating them into groups, such as vertebrates and invertebrates. He eventually classified around 500 species. Aristotle also made many observations about animal physiology and behavior.

Unfortunately, after the fall of Rome in 476 AD, Europe fell into the Early Middle Ages, also called the Dark Ages. This time period lasted until around the 1400s. Much of the knowledge of ancient biology was forgotten. Very little new work went on in any of the sciences, biology included. It was a few hundred years before biology got going again.
Additional images via Wikimedia Commons. Human mummy modified from image by jalvear. 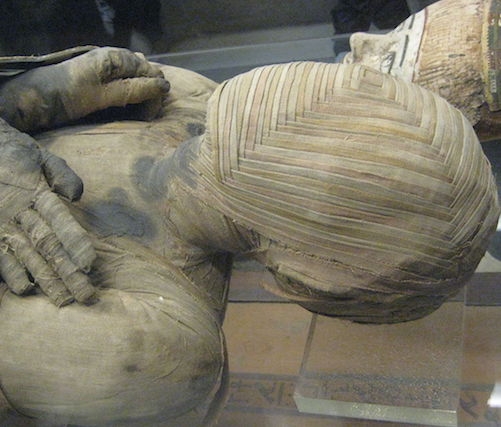 This human mummy shows the special care with which Egyptians treated some of their dead. Egyptians preserved humans as well as many other animals, including cats and dogs.

When Did Biology Start? | Ask A Biologist
Skip to main content