Probiotic: food or another substance that helps to replenish or replace microorganisms in specific parts of the body.

Skin microbiota: all of the microbes (including bacteria, fungi, and viruses) that live on an individual's skin.

White-nose syndrome: an infection caused by a fungus that affects bats and is killing them....more 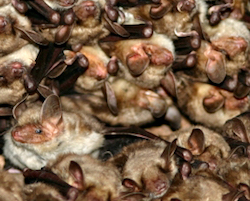 Bats roost in dense colonies over the winter. Click for more detail.

It is autumn and it is starting to get cold outside. You and the rest of your bat colony are preparing to hibernate. As winter approaches, you eat a lot of food to store fat and you settle in for a long sleep. You will need to sleep through the coldest months, when there isn’t any food available. During hibernation, you wake up from time to time to stretch your muscles and you use the energy you’ve saved to do it. As long as you don’t wake up too often, your energy stores will last long enough. But then something goes wrong. In the middle of the winter, you get sick. You don’t feel good, so you wake up several times, which uses up most of your energy. If this keeps happening, you may not survive the winter.

Bats in America have been experiencing this. They are getting sick with white-nose syndrome, a fungal disease that is causing many of them to die. In the PLOS ONE article, "Bacteria Isolated from Bats Inhibit the Growth of Pseudogymnoascus destructans, the Causative Agent of White-Nose Syndrome," scientists studied the good bacteria on bats’ skin. They looked at how these bacteria reduce the fungus invasion. Could this be a light at the end of the tunnel for the fight against white-nose syndrome? 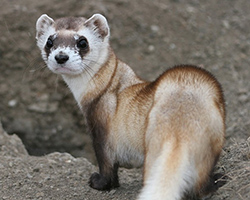 Scientists are working on developing a vaccine to protect black-footed ferrets from a deadly plague carried by fleas. Image by J. Michael Lockhart/USFWS.

When you get sick, you may end up getting medicine from the doctor that you need to take for a few days, or even a few weeks. Just like humans, animals can get sick too. But it is much harder to treat their illnesses with medicine. You can’t easily find all the sick animals in the wild and give them medicine one-by-one over days or weeks. So how can we help wild animals fight diseases?

Scientists can study what is causing a disease, and how to help animals fight diseases with single-treatment medicines. One newer focus of study is the skin microbiota that animals have on their bodies. 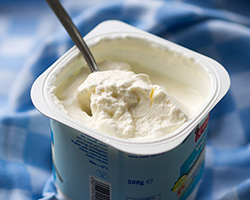 Yogurt has millions of good microbes and acts as a probiotic. Image by Takeaway.

Microbiota are good microbes that naturally live either inside or on the outside of an organism’s body. These microbes are important because they help animals stay healthy. When we create medicines or foods that deliver these good microbes, we call those probiotics. We can find probiotics in packed products, such as in yogurt, which has good bacteria that can benefit human digestive systems.

Now scientists want to use probiotics to try to help bats because they are getting sick. White-nose syndrome is a disease caused by a fungus that is affecting bats in North America. The fungus infects bats’ bodies and makes them wake up frequently during hibernation. Bats use valuable energy in when they awake in winter, causing them to run out of their energy stores. Many bats end up starving from the infection and dying, but some have survived the infection. To help bats, scientists had the idea to study the natural bacteria on bats’ skin, to see if it is helping the bats fight against this fungus. Perhaps they could then develop a probiotic that might protect bats from dying.

Rubbing Bats to Get Their Bacteria

Scientists collected bacterial samples from hibernating bats in two locations in New York and two in Virginia. To get the bacteria, they rubbed swabs on the skin of different bats—ten bats from each of four different species. They froze the swabs and took them to the laboratory. There, they put the bacteria on Petri dishes with nutrients to make them grow for three weeks at 9-10°C, the average temperature at which bats hibernate. After the bacteria grew, they separated them according to their color and their growing type. So, each kind of bacteria had their own Petri dish to grow. 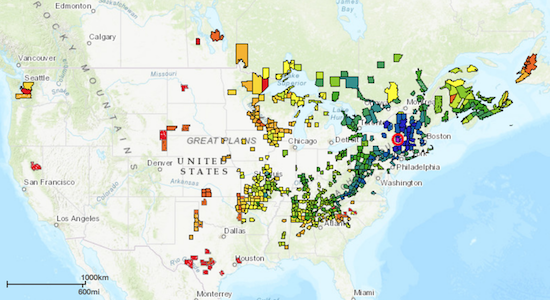 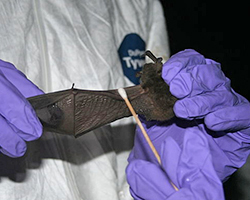 Scientists collected the bacteria from bats by swabbing them. Image by USFWS/Ann Froschauer.

Who Will Win, the Bacteria or the Fungus?

To see how well each of these six types of bacteria reduced fungus presence, scientists did two main tests on them. The first one was to grow fungus at different concentrations in the Petri dish and then add bacteria (“bacterial invaders”). The second was to grow bacteria at different concentrations and then add the fungus (“fungal invaders”). They did these experiments for 37 days, at 9 °C, the temperature at which bats hibernate.

And the Winner Is? 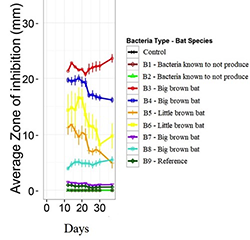 Most organisms in the world have their own unique DNA codes. To identify bacteria, scientists often compare gathered DNA to a database of different known bacteria DNA. These scientists did the same thing. They used a special technique to make millions of copies of the DNA of the bacteria they swabbed off the bats. Then they compared those with DNA of different bacteria previously studied. Now they know which bacteria they might be able to grow to use as bat probiotics.

The Next Steps to Help Bats

These findings are very promising for bats. Scientists think that if they can help the good bacteria grow on bat skin, they may be able to help bats fight the fungus. The next step is to try if this works in the field, where bats live. 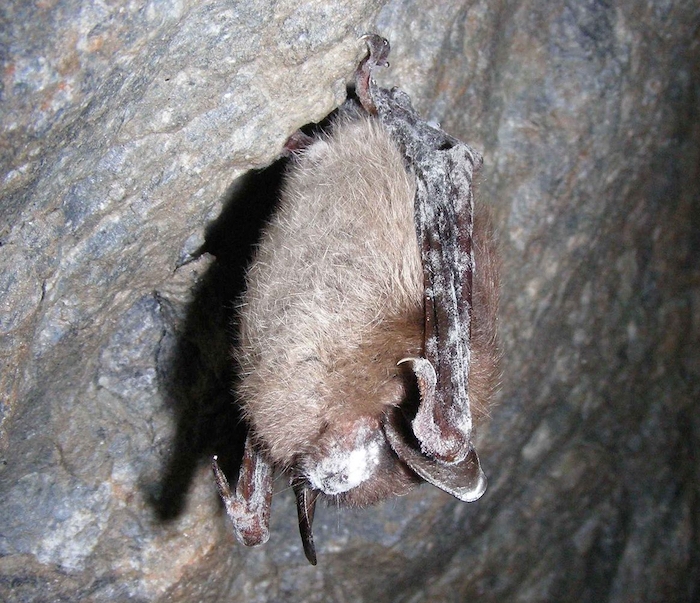 White-nose syndrome is spreading across the United States. Are there ways we might be able to slow it down or stop it from killing more bats?
Bacteria Isolated from Bats Inhibit the Growth of Pseudogymnoascus destructans, the Causative Agent of White-Nose Syndrome.
Learn how to read a scientific article

Batty for Food
Bats
All Activities